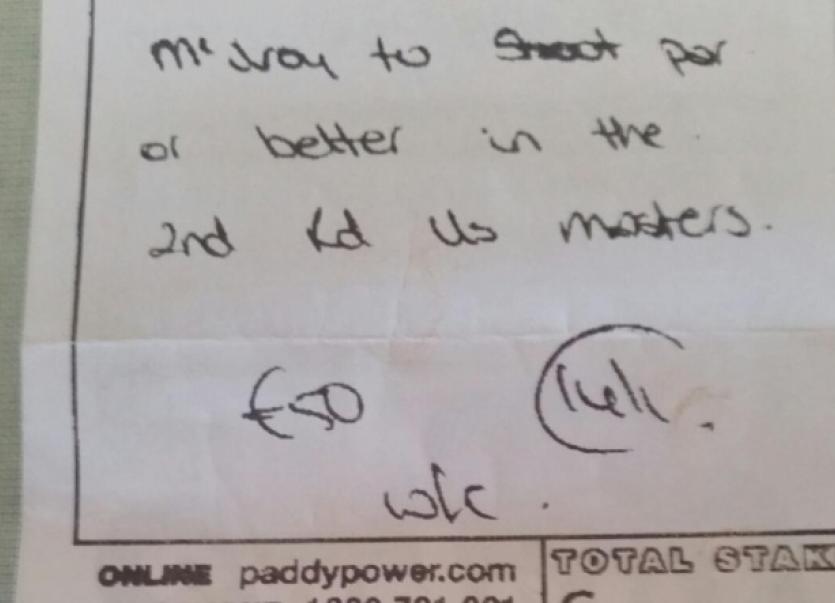 TWO County Limerick men say they won’t bet with Paddy Power ever again after they refused to pay out on a winning bet.

Mike Sexton and D Deady, from Bruree, staked €50 each on a special bet for Rory McIlroy to shoot par or better on the second day of the Augusta Masters at 14/1.

Mike said they didn’t want to have to go to the media and wouldn’t be ringing the Limerick Leader only that they have “a good case”.

Mr Deady entered a Paddy Power branch in Charleville on the morning of Friday, April 10.

“He went up to the girls behind the counter and asked them did they have any specials,” said Mr Sexton.

“The girls came up with a special on the screen for Rory McIlroy to shoot level par or better in round two. He asked the girls would you just make sure that price is right as it was a good price. So the girls behind the counter rang head office in Dublin and she got the OK that the bet was fine. He put €50 on for himself and €50 on for me,” he added.

Mr Sexton said Mr Deady even asked the staff members to write out the bet which they did “word for word”. They also signed the two dockets.

While delighted with the price it wasn’t all smooth sailing as Rory proceeded to shoot four over par on the first nine holes before turning it around on the back nine. He came home in five under and the good friends thought they had won €700 each.

They went in to collect but when the staff member put the docket through the computer it came up as a loser. They gave them a few days to check it out and eventually Mr Deady got a phone call from head office saying that they would only return their stakes.

Mr Sexton said everything was done by the book.

“If I picked it off the board, wrote it down myself, didn’t check it with anyone and they said it was wrong you probably wouldn’t have a leg to stand on,” said Mr Sexton.

“The price might have been a mistake but he asked the staff, they checked it out with head office and got the OK. If we wanted to take advantage he would have had more money on it.

“We did everything that a punter would do just to make sure that everything was above aboard. I just don’t think we were treated fairly. We didn’t do anything wrong as a punter. We checked with head office and their own person wrote out the bets,” said Mr Sexton.

The Bruree native says he is not a betting man but whenever he had a wager he liked to have it with Paddy Power as it is an Irish bookmaker.

“I don’t think I will ever go in there and have a bet again,” he said.

Mr Deady said: “I think, to be fair, we are being treated badly. That was three weeks ago last Friday. I have not been back in the office and don’t intend going back to the office. I feel let down because I felt that I had placed a bet fair and square, got a little touch and now it is gone. After nine holes he was four over par, the money was gone and we wouldn’t have gone back to Paddy Power.”

A spokesperson for Paddy Power said the special on display on their screens was for Rory McIlroy to shoot a bogey free round at 14/1.

“However, there was an error in our Epos system, which displayed the special as ‘Rory to shoot par or better’ which was incorrect. 14/1 to shoot par was clearly a palpable error and would fall under our palpable error rules which are: where a blatant or palpable error is made in transmission on any event on which we offer betting, bets will be settled at the correct price at the time at which the bet was placed.

“It’s regrettable on our part, but the rule is standard across the industry. Last year we offered over 75 million prices and on the law of averages for a number of reasons such as data input, error etc some can be displayed incorrectly.”