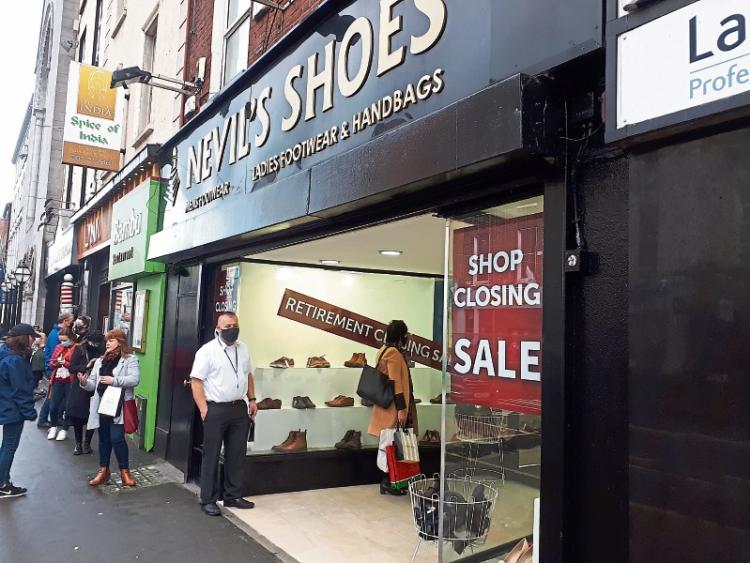 Nevil's Shoes made the sad announcement this afternoon

THERE is sadness in Limerick after a popular shoe shop owner announced she is closing the business after 34 years trading.

Nevil's Shoes, which operates from a landmark unit in the heart of O’Connell Street, will cease trading in the coming weeks.

In a statement, posted to the firm’s Facebook page, proprietor Chris O’Sullivan confirmed the sad news.

She wrote: “This shop ,which was established by my late husband Nevil has enjoyed many successful years of trading in O’Connell Street, Limerick.”

“A huge thanks to the wonderful staff and customers who have supported this business over the years. We look forward to your support over the next few weeks as we hang up our boots,” she added.

A closing down sale has kicked in, with reductions on well-known shoes. Seven jobs will be sadly lost.

Dear All Its with great sadness I announce the closing of NEVILs Shoes. This Shop which was established by my late...

”I am so grateful to all our customers, and we have a sale starting now,” she added.

The exact date of the shop’s closure is to be confirmed, and will be based on when all the stock is sold.

“It won’t be tomorrow, or the next day. It will be weeks – I’m not going to be running away,” she insisted.

The news of the closure of the shoe shop has been greeted with sorrow.

I'm saddened to hear of the closure of @NevilsShoes. As we all know it has been a stalwart of #Limerick City centre retail for many years.

I want to wish the team all the best in the next chapter of their lives & to thank them for their great service to the people of Limerick pic.twitter.com/gCBrCft0JX

On Twitter, Fine Gael councillor Daniel Butler described the store as a “stalwart” of city centre retail for many years.

“I want to wish the team all the best in the next chapter of their lives and to thank them for their great service to the people of Limerick,” he added.

This lunchtime, a queue formed outside the store as news of the closure spread.

There was Independent councillor Frankie Daly, who added: “My reaction is one of sadness, particularly for the family involved, and their contribution for Limerick. A friend of mine’s dad worked there for the years, and I remember as a young lad coming in getting shoes at the start of the school year. It’s part of the fabric of Limerick City. It’s a real blow to the city centre. It’s really shocking and sad.”

At the start of December, when non-essential retailers opened after the second lockdown, Chris said trading this month would be “vital” and potentially “make or break” for some retailers.