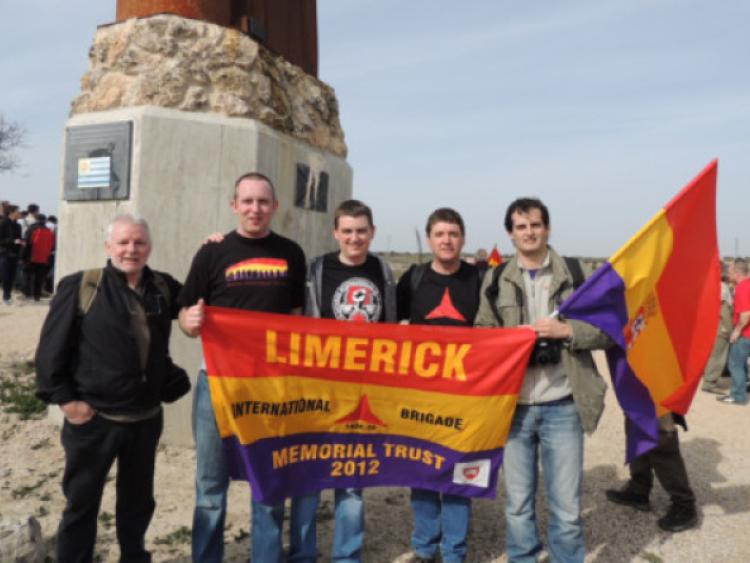 LIMERICK City Council is being asked to right a historical wrong by supporting plans to erect a memorial to the Limerick men who volunteered to fight Franco and fascism during the Spanish Civil War.

LIMERICK City Council is being asked to right a historical wrong by supporting plans to erect a memorial to the Limerick men who volunteered to fight Franco and fascism during the Spanish Civil War.

Limerick - through a resolution of the Corporation in 1939 was the first Irish city and one of the first in the world to recognise Franco as the legitimate ruler of Spain - and this should be regarded today as a historical embarrassment, according to Ger McCloskey, spokesman for the Limerick International Brigades Memorial Trust.

The trust is not aligned to any political party, said Mr McCloskey, Corbally.

“We are a completely non-political grouping of Limerick people who would like to see something done for those who fought with the International Brigades during the war. We know of five Limerick men who fought against Franco, of whom Frank Ryan from Elton would be the most famous. And one of them, Jim Woulfe from Athea, was actually killed (at the Battle of Belchite) in 1937.”

While those Limerick men who fought for the Republicans were much less in number than the few dozen Limerick men, inspired by the Irish bishops, who joined the Blueshirt leader General Eoin O’Duffy in fighting for Franco, Mr McCloskey said the atrocities committed by Franco during and after the conflict puts the Republicans on the right side of the historical argument.

“We are proud Limerick people who wish to send a positive message out about our city. Sadly, Limerick was the first city in the world to recognise the Franco regime, a brutal one since discredited. We should right this wrong,” Mr McCloskey said.

A contingent from Limerick has just returned from a commemoration of the Battle of Jarama, a key engagement of the Spanish Civil War just outside Madrid.

“Those of us from The Limerick International Brigades Memorial Trust were particularly moved but proud that Limerick man Frank Ryan’s name was repeatedly mentioned in the narrative of the battle,” Mr McCloskey said.

“The Francoist offensive at Jarama was designed to cut the Madrid–Valencia road, surround the city and leave it open to continuous attack. It began on February 6 1937 and by February 12, the 15th International Brigade was called into action.”

A British battalion - including many Irish volunteers - was in the front line of that defence, Mr McCloskey said, but relatively ill-equipped they were pushed back after two days of bloody fighting.

Frank Ryan stepped into the breach to lead what was called the Great Rally, halting the retreat and pushing back a Francoist force Mr McCloskey said was three times the Republicans’ size.

“The Limerick International Brigade Memorial Trust thinks it is only right the 263 brave Irish people who volunteered in the fight against fascism in Spain should be honoured at home. We are leading a campaign to erect a permanent memorial to the five volunteers from Limerick who joined in the fight. They were Frank Ryan, Jim Tierney, Joe Ryan, Gerrard Doyle and Jim Woulfe – who died in the battle of Belchite in 1937 and is commemorated in a memorial to the Mackenzie–Papineau Battalion in Victoria, British Columbia, Canada, but not in his native city,” Mr McCloskey said.

Recognising Franco’s government following the fall of Barcelona in January 1939, Limerick Corporation had urged De Valera to do likewise.

As reported in the Limerick Chronicle on January 28: “Limerick Corporation congratulated General Franco on the capture of Barcelona and on his fight for Christianity and freedom and requested that the Government recognise the administration of the Patriot Leader”.

Flowers were sent to Franco from Limerick, with the dictator expressing his gratitude to the mayor soon afterwards. This is a blot in Limerick’s history Mr McCloskey believes could be removed with official backing for a memorial to the brigadistas. Councillors have shown little enthusiasm for the effort to date, however.

“We see that Limerick is bidding to be a host city for the Gay Games in 2018 and we think an effort like this would tie in with Limerick being a city open to everyone. We have had problems in the past and we saw even last week that a racist website is being run from County Limerick so it hasn’t entirely gone away. We feel that by recognising these Limerick men who fought against fascism, the council would help in creating that city of tolerance where those values of fascism have no place,” Mr McCloskey said.

The trust plans, in time, to hold an annual week-long festival along the lines of the McGill Summer School and Mr McCloskey said his group had the support of many artists and intellectuals to help make this happen.

Those interested in supporting the memorial campaign can email libmtrust@gmail.com or visit the LIBM Trust Facebook page.