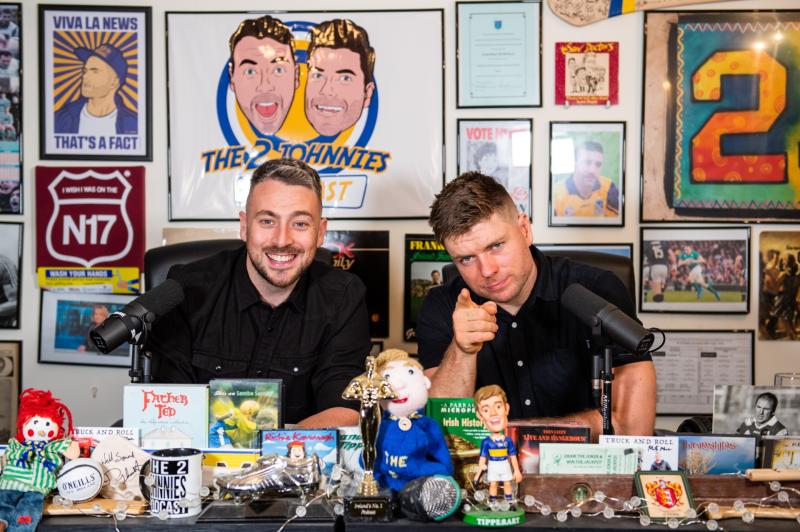 On last week’s podcast 222 Johnny B told the story of getting catfished! Fans got a taster of this story of lies and intrigue at The 2 Johnnies’ live show in the 3Arena at the end of April, with Johnny B giving a background to the “GAA Catfish” with an image. This week the lads will delve further into this bonkers story and reveal the multiple fake accounts which helped spread a web of lies around the four corners of the country. They will also chat to Louize Carroll, Chartered Occupational Psychologist, who will explain why somebody will go to these great lengths to catfish and deceive another person.

Initially connecting via Instagram, Johnny B spent weeks chatting to “Cora O’Donovan” from Limerick, exchanging voice notes and talking well into the night. Her profile was littered with posts, videos of her dancing and Instagram stories - with over 15k followers, she had to be genuine. Except she is not. Despite making multiple efforts to meet up, Johnny B is met with excuse after excuse and ends up meeting and hanging out with Cora’s friend “Nicki”! Nicki is a real flesh and blood person – she claims her boyfriend is a well-known GAA footballer – and it is Nicky who the lads suspect is behind the fake accounts.

The night after the 3Arena show, the lads receive a couple of messages from someone called “Muireann” explaining that she was at the 3Arena show and was shocked to discover that her images had been used in the Cora O’Donovan Instagram account. She has been playing detective herself and in just 24 hours, she has found out who is running the account and has had a Zoom call with these girls. She has also discovered the videos on the account actually belong to an American dancer called Madison Cubbage. Madison is completely innocent in all of this and had no idea her images were being used in this regard. The lads and the podcast team had spent weeks looking for the owner of the photos trying everything from reverse image searches to Smacks forking out €79 on an image search app, all to no avail. There can be only one solution: Muireann is yet another fake account being run by Nicki. Once Johnny B realises it’s a fake account he blocks ‘Cora O’Donovan’ on all his social media and WhatsApp, this doesn’t stop her posting doctored images of them together on her Instagram (see attached image), of course Johnny B has no idea she is doing this until he is sent the screengrab.

The podcast will take you through the highs and lows of this cavalier tale of deception, as the team uncover multiple accounts being run by Nicki. One such account is Emma McCarron who has catfished several GAA players. The lads receive a flurry of emails from a ‘Lauren Murphy’ – who attempts to prove her identity with a doctored image of a passport - and a ‘Laura Lou’ all admitting to playing a role in the catfish. All fake!

Since revealing the catfish, the 2 Johnnies have received a huge amount of emails and phone calls from GAA players and well known media figures who have all fallen victim to the same catfish. In each case the story has been similar but equally insane! The excuses for failing to turn up to dates have ranged from car crashes, to people dying, to even falling into a diabetic coma!

“At this time all roads lead to Nicki. We have hard evidence that Cora O’Donovan, Emma McCarron, Dearbhla O’Donovan, Hannah Ferguson, Lauren Murphy, Laura Lou, Nia, Dearbhla Connolly and Shannon Boyle are all Instagram accounts being run by Nick. She has used these accounts to catfished approximately at least 40 men that we know about from all four provinces. Nobody has been asked for money,” said Johnny B.