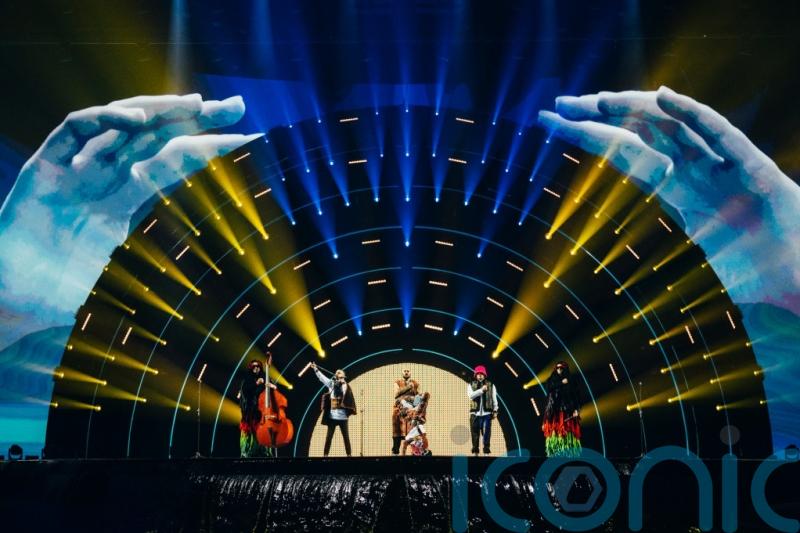 The act have been the frontrunners since Russia’s invasion – which prompted organisers to ban the country from competing.

The country joined the contest in 2003 and its three wins make it one of the most successful of the newer competitor countries – having triumphed in 2004 and 2016.

Receiving the coveted trophy, Kalush Orchestra said: “Thank you for supporting Ukraine. This victory is for every Ukrainian. Slava Ukraini.”

During their performance, which combined rap and Ukrainian folklore, the group were dressed in elaborate outfits, including long multi-coloured fringed ensembles.

They beat favourites Spain, whose entrant Chanel gave a jazzy performance to SloMo while the entire crowd sang along with Italy’s Mahmood and Blanco who sang Brividi, which featured a powerful rap, behind a back drop of twinkly lights.

The grand final opened with an energetic performance featuring strobe lighting and projections of the sculpture of David by Michelangelo from Czech Republic’s We Are Domi singing Lights Off.

During the show, fellow folk band Iceland’s Systur, who performed ballad Meo Haekkandi Sol, ended their performance saying: “This is for Ukraine, we love you.”

Finland’s rock group The Rasmus kicked off the first few performances with a powerful version of Jezebel, ripping their shirts off mid-show.

Marius Bear from Switzerland delivered a raw rendition of his track Boys Do Cry backdropped with simple lighting while France’s Alvan and Ahez had fire on stage to perform their track Fulenn.

Norway’s Subwoolfer dressed in yellow wolf costumes while performing a synchronised dance number and singing Give That Wolf A Banana.

Armenia’s representative, Rosa Linn, gave an emotional performance with her song Snap on a stage with a bed, lamp and chair all seemingly wrapped in white toilet roll.

Estonia closed the show with Stefan performing a catchy rendition of Hope, adding at the end of his performance: “Don’t lose your hope for a better tomorrow.”

The Eurovision final featured the 20 successful nations from the week’s two semi-finals, as well as the so-called big five of the UK, France, Germany, Italy and Spain.