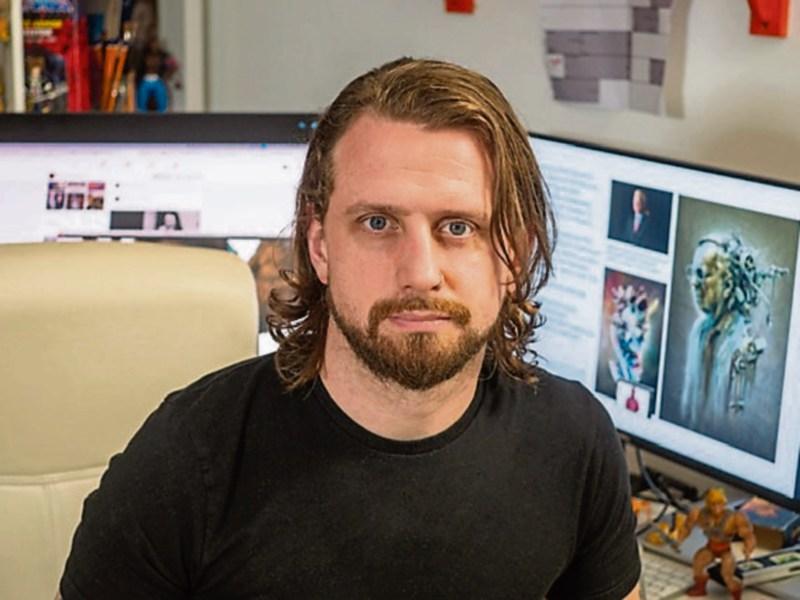 A generation ago in Limerick and elsewhere throughout Ireland children used to read and swap comics.

I remember ‘progressing’ from the gateway visuals and childish stories of The Beano and The Dandy to the more hard-core Eerie, Creepy and Vamperilla. The covers of Eerie and Creepy were so gruesome and the covers of Vamperilla so seductive that my mother once sprinkled them with holy water! It didn’t work, as both youthful imagination and hormones could not be sedated!

The art of Ken Coleman has not only brought me back to that imaginative world but it has also opened new portals to an unexplored visual galaxy.

The Limerick Leader feature last June brought Ken’s art before many for the first time. That taster has whetted appetites to want to know more about the man and the artist and this article attempts to offer that.

Portraiture contains as much of the artist as the subject. Hence we can immediately identify a Lucian Freud, a Louis le Brocquy and so on. So too with Coleman, his DNA is unmistakably evident in the manifestation of his creations. Take a look at the John Steele album cover, ‘All My Days’ and the poster Ken designed for the Richard Harris International Film Festival as well as the portraits of his fiancé, Margarita and his son, Luke and you will see what I mean – each unique but equally they are, obviously, the work of the same artist.

Coleman is a Limerick mixed media artist, combining fine art training and principles with photography, 3D digital painting and emerging technologies. His work has been published worldwide and clients include performing artists such as The Cranberries and Morbid Angel.

Ken is blazing a trail that is quite astonishing. The 40-year-old is an exceptionally gifted talent. Limerick has had dominant visual artists in previous generations and some are still at the summit of their careers (such as John Shinnors, Michael Collins et. al.) but Ken is a contemporary artist in the mixed media category and as such he is head and shoulders above his peers.

Ken lives with his beautiful Colombian fiancé, Margarita Bernal Arango and their adorable four-year-old son, Luke Coleman Bernal, in Limerick city. Of course, as one would expect, their family photographs are not typical portraits.

He hails from Lisnagry where he attended the local primary school and then went on to Newport Secondary before graduating from the Limerick School of Art and Design (LSAD) with a diploma in Sculpture, a degree in Fine Art Print Making and a MA in Interactive Media from the University Limerick. This latter qualification, in particular, enables him to lecture for LSAD at the Clonmel Digital Campus. This college specialises in courses in Creative Multimedia, Digital Animation Production and Game Art and Design. His students are extremely lucky to have him as their teacher on the Game Art and Design Course and the Digital Production Course.

Coleman’s CV is very impressive but it’s not just his qualifications that impress but his qualities as a person.

Artists are not always good at the business end but Ken has the acumen needed to thrive and that process is well underway. As official designer for some international and local bands Coleman has been involved in a host of very interesting and high profile projects such as artwork and photography (graphic design for all print and online content) created for The Cranberries European Tour in 2016.

Coleman designed the album cover ‘Kingdoms Disdained’ for Morbid Angel – the ninth studio album by the American death metal band, released in December, 2017 . Other collaborations include Black Star Riders, Warfather, The Blizzards and Eden Ibiza. He also did the artwork for the Flag Listeners EP and their debut album, ‘And Other Short Stories’ and recently for the John Steele debut album, ‘All my Days.’

In terms of his work and professional experience he is excited to have recently partnered with the Mal Manos Toy Concept Project with Mark Taylor (creator of He-Man and Skeletor). . This is another step in Coleman’s ascent to the top of his creative profession.

In 2016 Ken was Creative Director for Be Well Limerick (mental health in youth awareness week) for the Limerick Youth Service. This involved graphic design workshops to create branding and artwork for the campaign as well as talks on Art & Mental health at the Hunt Museum. He sometimes volunteers for youth events including a green-screen photoshoot at Children’s Ark, Regional hospital.

If you haven’t seen the artwork of this phenomenal talent you are missing something very special and I would encourage you to visit his website: artofkencoleman.com and be prepared to be stunned by the genius of his work.

At one time in his life Coleman was a visual merchandiser at Brown Thomas. His work there involved anything from clothing mannequins, to customising artwork for some brands (posters etc.), dressing their windows – and we all remember how fabulously dressed they were and still are. In that role he photographed their window displays in Limerick, Cork and Galway, which Brown Thomas used in their promotions.

Some people became aware of Coleman’s work with the passing of the well-known and much-loved Gerry O’Brien on August 27, 2019 when his portrait of Gerry was circulated on social media. A copy of that was acquired by Rocky O’Shea and hangs in the Commercial Bar, where Gerry could be found on occasions, especially if there was live music.

Coleman’s art has been published in a number of artbooks and magazines, such as Lucifero. He also designed the cover of this volume. In one depiction Lucifer is portrayed as ‘Withered.’

Interestingly Ken explained, “My idea for Lucifero was that my depictions of the Devil were more of him questioning the authority of God and becoming caretaker of Hell. I see it as a demotion rather than him being an actual evil entity. So, I basically depicted him as an old man who was just tired of his job.”

This subversive interpretation of the orthodox biblical narrative is refreshing (though some might say heretical), as it presents Lucifer as a being who stood up to the authoritarian Judaeo/Christian deity and his tyrannical agenda. Coleman is in good company in imaginatively expressing sympathy for the Devil as The Rolling Stones song of that title demonstrates!

But Ken is no Satanist. No doubt there will be some who might think he is in league with the powers of darkness and this work is designed to rehabilitate the fallen angel. I see it as a story reimagined.

Alas, Ken is not a red scaly devil with, horns, cloven foot, tail and ubiquitous trident! He is an ordinary decent person and a diligent and determined artist who has, at this point in his life, already achieved an extraordinary amount. I found him to be intelligent and articulate, a thorough gentleman and a total professional.

It hasn’t all been plain sailing for Ken. Two years ago he made a decision to quit drinking and to focus on his family and work rather than be sucked into the vortex of dissipation. “Alcohol hindered rather than helped” said Ken. So, the only demon he needed to exorcise was alcohol and that has been done!

Coleman has had a number of exhibitions and installations in recent years, such as: Battle at the Castle video mapping project, Curator’s Choice, the Hunt Museum, Electric Picnic and Canalaphonic Music and Culture Festival.

He has several awards, including winner of the Cannes Animation Daze & Boston Sci-Fi Film Festival 2016. And this is not a comprehensive list of his exhibitions, achievements and awards!

Ken uses 3D scanning technology to scan action figures, people and everyday objects. This technology has helped him along with his macro photography to combine a lifelong love of toys, kit-bashing and fine art into many digital mediums. His workflow and methodology is often about the subconscious and the processes of negative human emotions with positive outcomes. In other words, Ken explains, “using art as a form of therapy to take anxieties and develop something positive and productive.”

Limerick is rightly proud of Ken Coleman and we look forward to seeing more of his fabulous work.