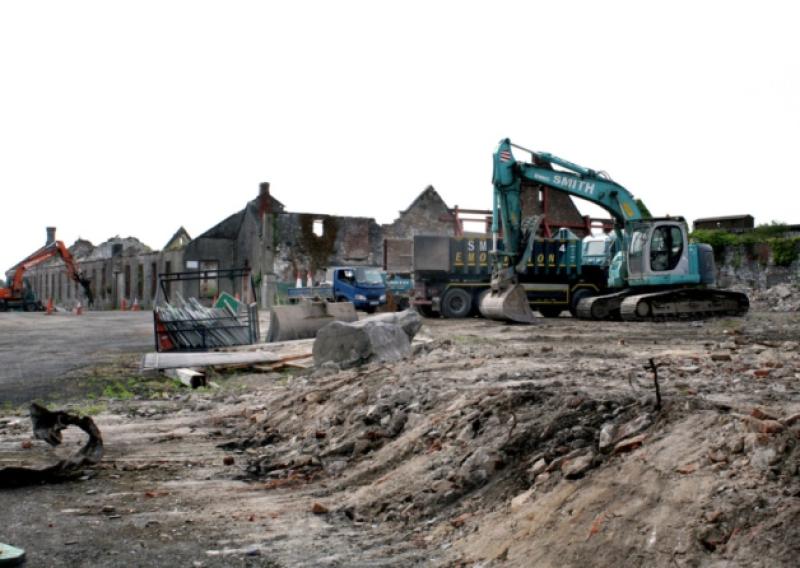 WORKS to clear and prepare the site of the former Tait clothing factory ahead of the construction of a major housing development are nearing completion.

WORKS to clear and prepare the site of the former Tait clothing factory ahead of the construction of a major housing development are nearing completion.

As part of the regeneration project Limerick City and County Council is set to convert the former factory premises at Lord Edward Street into 83 units of sheltered housing.

The development of the five acre site, which will cost in the region of €10m, will also include some commercial properties.

The plan, which was formally approved by councillors last month, is likely take up to two years to complete.

While crews from Smith Demolition have been working for more than a month, clearing and preparing the site, the knocking of the ten-foot boundary wall at Edward Street has now opened the historic site up to public view.

“There is a lot of history here” said Noel Smith, director of the Newcastle West-based company which has been contracted by the local authority to carry out the works. “Our job is to clean and tidy the site, we segregated the stone for use again afterwards and we crushed all the concrete and put it back in to level it,” he explained.

While a number of outhouses and sheds have been demolished, the facade and shell of the former factory and other buildings of significance have been preserved and will be incorporated into the development.

The clothing factory was opened in 1858 by businessman Peter Tait after his firm secured a number of substantial contracts - including to supply uniforms to the Royal Limerick County Regiment and the British line and rifle regiments.

Peter Tait, who served as Mayor of Limerick for three consecutive terms between 1866 and 1868 retired from the business and left Limerick around 1875 leaving the factory to be run by his son.

It was subsequently renamed the Auxiliary Forces Clothing and Equipment Company.

Works to prepare the site of the former factory ahead of construction will last until early next week.