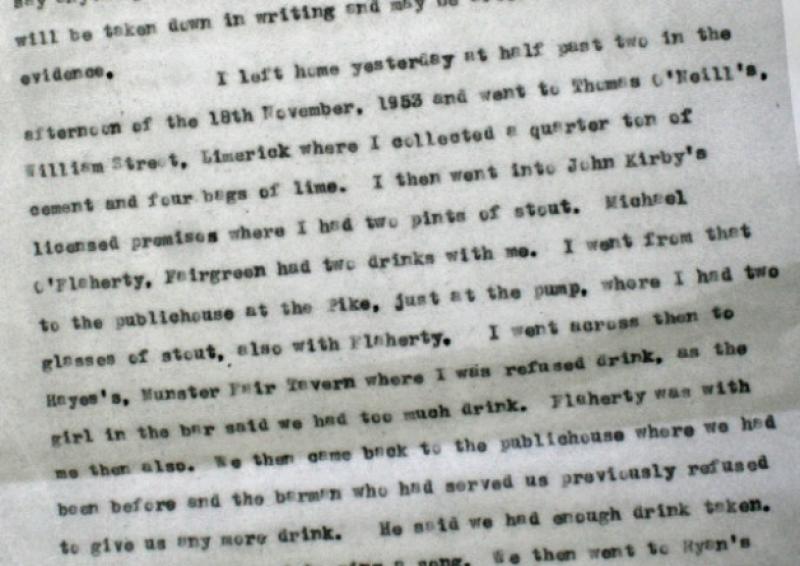 SIXTY years ago today, 25-year-old Limerickman Michael Manning became the last person in Ireland to be executed. With Easter of 1954 looming, he begged the Minister for Justice to save him from the hangman, but in vain.

SIXTY years ago today, 25-year-old Limerickman Michael Manning became the last person in Ireland to be executed. With Easter of 1954 looming, he begged the Minister for Justice to save him from the hangman, but in vain.

In the statement Manning gave to gardai only hours after his fatal attack on Catherine Cooper, an elderly nurse he had attempted to rape on the Dublin Road five months before, he blames his actions on “too much drink”.

The statement in the garda file, (published in full in this weekend’s Limerick Leader, print edition), describes his movements on that fateful day – November 18, 1953.

Married only the previous year, he told arresting gardai that he went by the name Mannion, even though his actual name was Manning.

His trial opened on February 15, 1954 and lasted only three days.

He admitted to the attack but pleaded not guilty to murder. When the jury found him guilty, after three hours of deliberations, he is said to have “paled visibly”.

On the Tuesday after the Easter weekend, he was taken from his cell at Mountjoy prison and hanged by the infamous Albert Pierrepoint.

A petition for clemency had included signatures of Catherine Cooper’s family members, but it was ignored.

Manning himself then wrote a letter begging for a reprieve. “I ask the Minster for Justice to show his mercy upon me as it is so near to Easter and Good Friday and it is our Holy Mother’s year. I am not afraid to die as I am fully prepared to go before my God, but it is on behalf of my wife as she is so young and so near the birth of our baby.

“Instead of one life being taken there could be three as it would be a big shock to my wife if the execution will be carried out on the date mentioned [April 20]. So I would be grateful to you if you showed your mercy toward my wife and me.”

Manning’s child was born a few weeks later to the wife who wrote that she had “adored” him.