Minister Harris and Minister of State for Skills and Further Education Niall Collins opened a new NZEB and Retrofit Centre of Excellence in Roxboro which will offer training to approximately 1,500 learners annually.

Mr Harris also announced the purchase of new training buildings for Limerick and Clare Education and Training Board and funding for the fit out of a major new facility for engineering students and apprentices at the Technological University of the Shannon Coonagh Campus.

NZEB stands for Near Zero Energy Build which will ensure that new build homes or houses that are being retrofitted will be as environmentally friendly as possible. 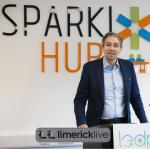 WATCH: Minister warns University of Limerick must ‘close the loop’ on assurance to get funds restored

As part of the National Retrofitting Plan, it is estimated that half a million homes will need to be retrofitted by 2030, which will require 17,000 more people working in the field.

Three retrofitting centres have already been established across the country, Limerick being the third, and each centre will train 1,500 people per year.

Minister Harris also announced today the purchase of three buildings on Mulgrave Street for LCETB, adjacent to the existing College of Further Education and Training.

LCETB plan to develop this site to create a Film and Digital Media Centre of Excellence which will allow them to collaborate with Film in Limerick and local industries such as Troy Studio to become a leading provider of film and digital media education and training.

Speaking to the Limerick Leader, Minister Harris said that Limerick is leading the way in the Mid-West.

"It is really important that we put in the linkages between Further Education and Higher Education.

"As well as opening this centre I am delighted to say that we are making progress on the Coonagh campus as well.

"A lot of the programmes there will be apprenticeships in things like manufacturing and engineering and it has the possibility to take in 800 students a year.

"With the purchase of the buildings on Mulgrave Street as well, Limerick is becoming a leader in the film production area, there are huge possibilities there".

George O’Callaghan, Chief Executive of Limerick and Clare ETB, said: "We are delighted to be leading on this in the area and the region.

"We have a fine facility here which will enable us to teach the newest skills to all of the apprentices over the coming years and start the process of doing our bit for climate change and making sure our houses are fit for purpose into the future."