UNDER a baking hot sun, anger was at boiling point at a protest against the closure of the Dairygold store in Cappamore.

After a strongly worded statement from the Save Our Store (SOS) group was read out by secretary, Paudie Ryan, farmers were invited to publicly shred letters from Dairygold. These were notifications on headed paper of the closure of their accounts and reallocation to different branches. The store is due to close on September 18.

PJ Blackwell, chair of the SOS group, said the letters were sent out prior to a meeting they had with Dairygold senior management. The group’s statement said this showed “total disrespect and disregard for the meeting”.

“We are here today as a sign of our opposition and objection to the closure. We will shred those letters to send a message to Dairygold that we don’t accept those letters as being a valid option,” said Mr Blackwell.

On Saturday morning, one by one, farmers climbed the podium and publicly shredded their letters. A round of applause rang out for each one from the around 100 who attended the rally. Also in attendance were Deputy Richard O’Donoghue; Cllr Martin Ryan and former councillor, Noel Gleeson. A further 2,000 locals have signed a petition to save the village’s store. 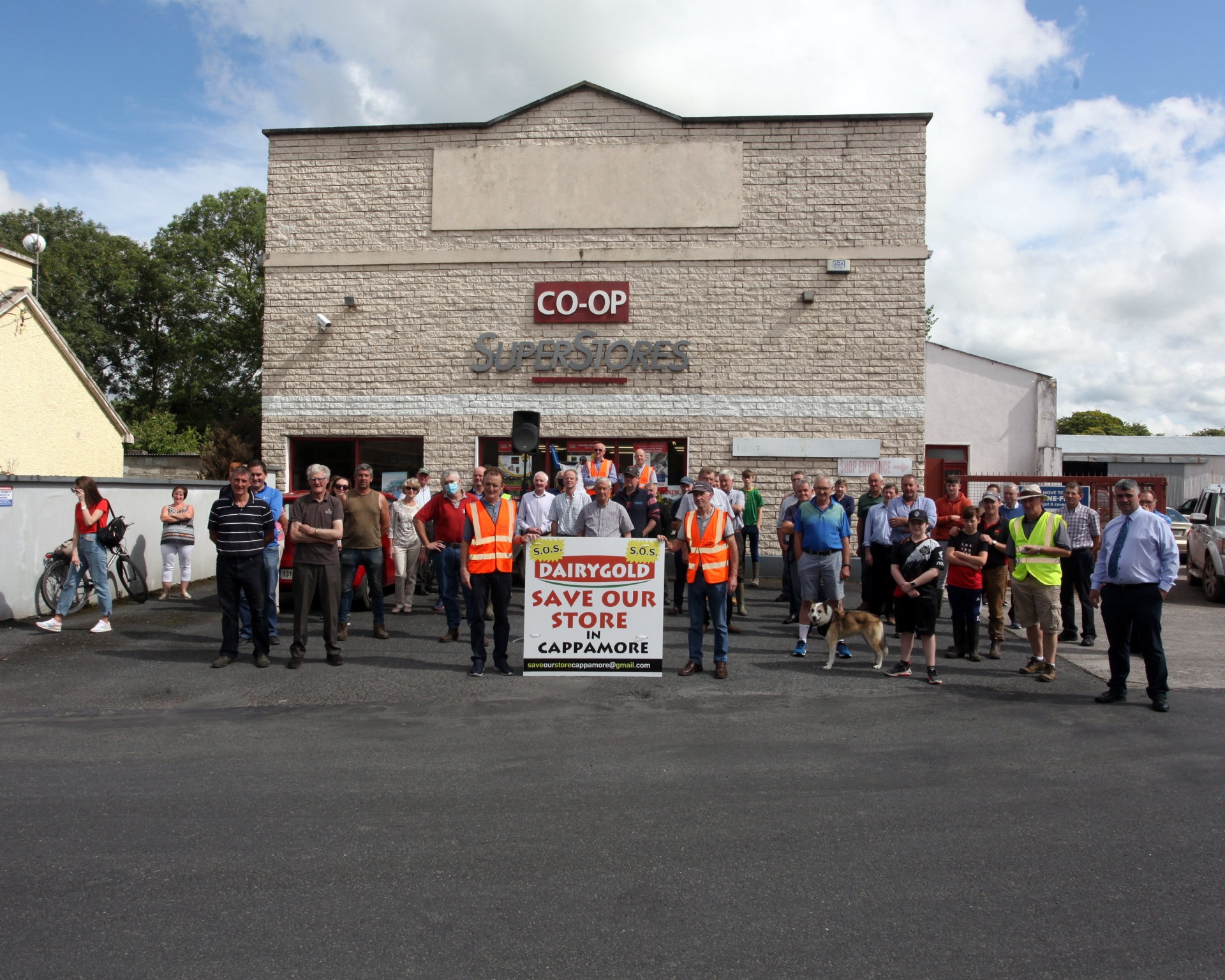 Reading from the statement, Mr Ryan said if the gates do close on September 18 it will be a very sad day for shareholders, farmers, customers and community.

“It will leave a very sour taste that will be felt for years to come and will have repercussions for all businesses in the town. For this Dairygold can hang its head in shame,” said Mr Ryan, before adding that it is bigger than one store closing in east Limerick.

“Many contributions have been aired to date about successive governments neglecting rural Ireland and closures of banks, garda stations, post offices, pubs, schools and other essential services. It’s all about Dublin as was recently illustrated by the unfair distribution and representation of ministerial appointments.

“Incredibly, we now have a situation where we, in rural Ireland, are pucking the ball into our own net. Dairygold by its actions are contributing to the demise and driving another massive nail into the coffin of rural Ireland.

“We are developing into a society of automated machines and robots, where every time we press a button we are contributing to job losses. Trying to get hold of a human being on a phone of a large company is next to impossible. Press 1 for this, 2 for that etc. Or, ‘Are you aware we can resolve your query online?’. No, you can’t, I want to speak to somebody.  We are losing our personal touch, our ability to meet, greet and converse. For all our education, we are lacking in basic cop-on and common sense. Dairygold’s actions are illustrating this,” Mr Ryan read out.

The statement concludes with the group “making one last appeal publicly to Dairygold.”

“Stop trying to fix something that is not broken – leave well alone. Your decision is at least premature and ill-advised. If the day comes that circumstances change and business does decline, deal with that issue then, not now.

“We are asking for everyone’s support for the sake of rural Ireland - where we are proud to be from - to put pressure on Dairygold to reverse this decision and do the decent thing and keep this fine store open for business,” read Mr Ryan.

After the Leader contacted Dairygold about the protest, a spokesperson said it acknowledges and understands the disappointment within the Cappamore community regarding the planned closure.

“The closure is only one element of a much wider Dairygold Store Investment and Integration Plan approved by the Dairygold board back in autumn 2017. This decision was carefully considered and not taken lightly. Regrettably, it cannot be unwound or reversed.

“However, in relation to the future use of the Cappamore store, we are prepared to work with the local community to explore any alternative arrangements to which the store site could be put to, that would be of benefit to the area,” said the spokesperson.