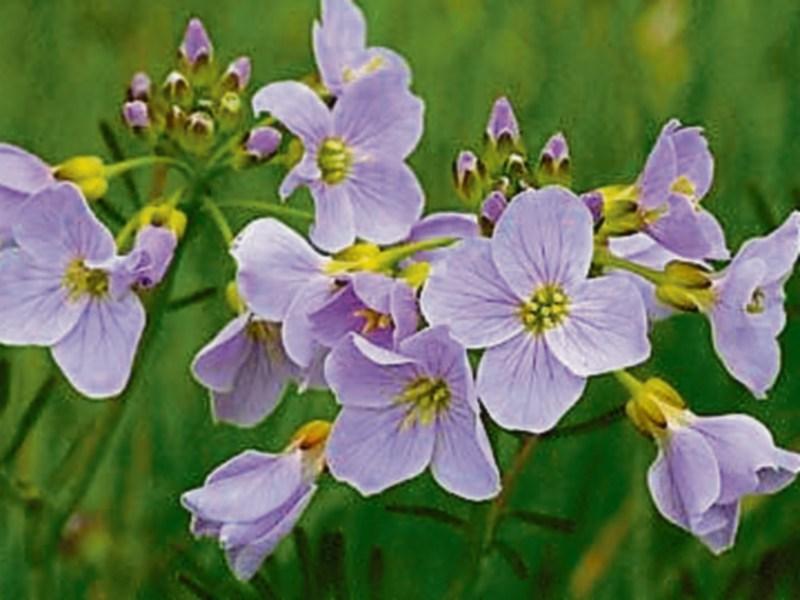 I STILL feed our horse by hand as she welcomes the supplementary food as the nights are still very cold. There is still a touch of frost most mornings and on a few occasions her water bucket has been iced over.

To get to her field I have to cross a small stream and on the opposite bank I noticed the first of the cuckoo flowers. Its proper botanical name is “ladies smocht” but I prefer it’s far more seasonal and descriptive name of cuckoo flower.

This was based on generations of people observing the natural world. People noticed that this flower appeared at the same time as the arrival of the cuckoo bird.

The cuckoo flower grows in damp meadows and also the edges of slow moving streams. It used to grow in my garden when we first moved in, but now in its place there is a well-used vegetable bed.

A few weeks ago I found it in flower in a long abandoned quarry. A drainage ditch ran through part of the quarry and this had recently dried out. It was full of cuckoo flowers and an active orange tip male who was patrolling for females.

The plant has four mauve flowers and it is bloom from April to June. If you take a closer look you will noticed that it leaves are hairless.

The cuckoo flower has a close association with the orange tip butterfly. The female lays her eggs on the plant and when the caterpillars hatch they eat the leaves. Females usually lay just a single egg on each plant as the larva can turn to cannibalism.

Later that evening as we returned to give the horse her evening feed we got another welcome surprise. I could just make out the cuckoo calling in the distance. This is one of the best spots around the village to hear the cuckoo and most summers I hear two singing males.

I met a neighbour here a few times over the last week. He is retired and was patiently waiting to see if he could hear the cuckoo. He worked hard all his life on the land and life is now allowing himself a few small indulgences. He told me that in his younger days the cuckoo sang regularly around his house and farm, but worryingly he now has to travel to hear his beloved bird.

When I got home I had a call from another man who had also just heard the cuckoo singing, He lives in a wooded glen but in the wet fields around his house there are plenty of meadow pipits. These are one of the favourite host species of the cuckoo.

You can also keep a track of the route taken by cuckoos through the spring watch project. You log on your record and this helps build up a picture of the journey of the cuckoo from Africa all the way to Ireland. This can also be done for swallows and other summer migrants.

The following day I was speaking to a very knowledgeable garden friend. We were talking about the cold weather and the Cuckoo. In Kerry where she is originally from they called this cold spell “the Scairbhin”. This literally translates as the “cold month of the cuckoo”.

People believed that this was nature’s way of getting back at the cuckoo for its nefarious ways. As every school boy and girl learnt in school the cuckoo does not build its own nest. The female who is a duller brown in colour and has a bubbling call stakes out the nests of birds like meadow pipits.

She waits for her opportunity and quickly flies in. She grabs an egg for the host nest and lays one of her own. The whole process takes just a few seconds. Her egg is a lot bigger than the hosts but is a good match in colour.