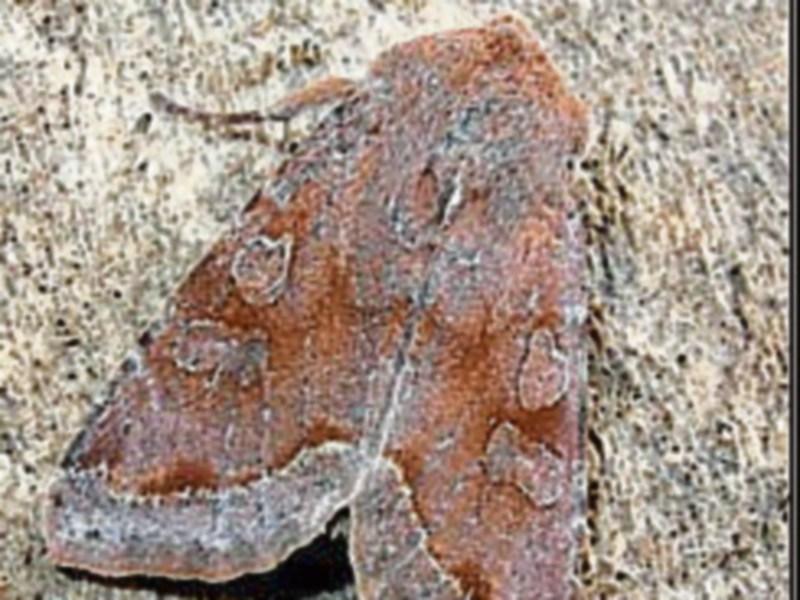 The clouded drab moth is common in spring

THE warm sunny day with a gentle breeze created the perfect conditions for some nocturnal wildlife watching. We set up the moth trap early and had high expectations of a good catch. The emptying of the moth trap would have to wait till the morning so we dusted off the bat detectors.

Just after sun set we sat outside on deck chairs and waited for the action to hopefully begin. Ten minutes later we were enjoying a bat feeding around the street light. There was a lot of feeding activity but that is understandable, if you have been hibernating for the last five months. We said a silent prayer that they would leave some of the moths for us to identify.

Adult moths are a very important part of the diet of bats and especially the large species like Leisers bat. They are a substantial protein packed meal, the wings have no calorie value and are discarded. Bats rapid flight and their small size means they use a lot of energy, over half of the insects they gather each night goes to fuel their bodies.

The females also mated in autumn but delayed their pregnancy till the spring when there is plenty of insects around. It took a few minutes to tune the ears back into the calls of the bat but the ‘common pipistrelle’ has a very distinctive voice.

The next morning we were up early just as the bats were returning to their roosts. It was surprisingly cold and everyplace was covered in a coating of frost. We quickly popped back inside for coats and hats and got the bug containers lined up beside the moth guide book.

The first moth we saw was a Hebrew character resting on the outside of the moth trap. There are always some moths on the outside and later in the spring these ones are more vulnerable to birds like great tits. We also found this moth under all of the egg cartoons.

We recorded 20 in total and this is a good catch for early in the moth season. Even among my garden population of Hebrew characters there is a lot of variance. Some of the moths were very dark and others quite light. The size also varied with a few moths notable smaller than the rest.

Some of them were fresh and their colours and marking bright. Others were faded as a few weeks for a moth is the equivalent of a lifetime. Rain and generally wear and tear and narrow escapes all take their toll.

A few had bits missing from their wings and this told the story of narrow escapes from predators like birds. Moths are sometimes disturbed during the day and eagle eyed birds like robins are quick to spot where they land and try to catch them.

Hebrew characters are also good moths to photograph as unlike some other active species they lay there in your hand, playing possum without a wing beat.

Harry, who was helping out, carefully emptied the moths into long grass around the garden so that they are hidden for birds. He spotted that one of the moths had an unusual green thing stuck to his body.

At first glance I thought it might be blood that had frozen during the night but I dismissed this idea as the moth was in the trap. The heat from the mercury vapour like keeps the inside of the trap above freezing. Also moths don’t have neon green blood.

I took several photos and while I am still investigating I think it is a parasite. Possibly the larva of a solitary wasp who hatched inside the body of the moth. This slowly eats the moth alive leaving all the vital organs intact, a very gruesome process.

The next moth we found was the clouded drab and on first inspection it does really live up to its name. But like a lot of insects in nature the hidden charm is in the detail. The wings are rounded and not as sharply angled as other spring moths. Under a hand lens you can make out all the subtle colours and I would recommend investing in one for exploring the natural world. It also brings you closer to flowers and we love using it for water bugs.

The last of the moths is the common Quaker. This can vary a lot in general colour but the kidney and oval mark on the body are generally outlined in white.

Other insects are attracted to the light and we released a daddy long legs or Cranefly and a spider who was hiding in the corner of the trap. Siders often move into the moth trap where they have aces to an abundant of flies.