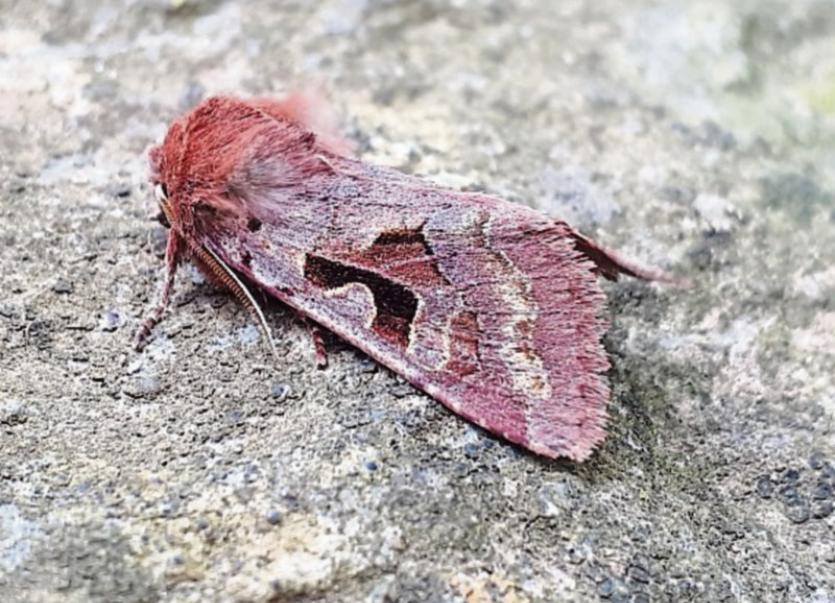 AS the days become longer and the night-time temperature rises moths are increasingly on the move. Towards the end of March is my traditional time for dusting of the moth trap and starting to record these fascinating insects again. Another good indication is when the bats emerge as moths play a major part in the diet of these creatures.

My moth trap is called a “skinner trap “and gets power from the mains. I run the lead down from the second story of the house. This helps to keep out intruders of the four legged kind and also the two legged version. A powerful mercury vapourer bulb lights up the garden and attracts moths from quite a distance.

A white sheet hung over a clothes line works just as well and place a light behind and see what emerges from the dark.

When the moths reach the light they circle around and eventually drop onto the sloped plastic sheet and slide down into the trap. There is only a narrow entrance and the moths can escape. They eventually come to rest under one of a dozen or so empty egg cartons that I have placed on the bottom of the box.

The last time I ran the trap the night turned out to be very chilly. April can still have some hard frosts and I was not to optimist as I sleepily steeped out into the garden. The first few cartoons were empty as expected but as I checked a little deeper I found my first moth.

I have recorded hundreds of Hebrew character moths over the years and it is one of the commonest spring moths in my garden and in Ireland. It get sits name from the black saddle shaped mark on its body. This resembles the letter nun from the Greek alphabet.

A few months ago I recently gave a talk to probus group (for retired professional men) and one man had lectured in university and spoke Hebrew.

My Hebrew moths were quickly put into a bug container as the alert garden robin arrived to see if there was any rich pickings. Later on I can examine them at my leisure and also show the kids. Bringing kids up with a knowledge of night creatures like moths and bats helps distil fears in later life.

They are familiar with several moths and particular like the Hebrew characters. These moths are good to study and place in your hand. They don’t move around or warm up quickly and will sometimes lay on their backs as if dead.

You need to be really gently and careful when handling moths as the scales covering their body can be easily damages or brushed off. These scales naturally fade and wear with time and the two Hebrew I caught were at least a few weeks old.

The main flight season is between March and April but the effects of climate change are even be felt at the moth level. Hebrews can know be found during the winter and are emerging earlier each spring.

The earlier generation is smaller compared to the later emerging moths. This was evident from my catch. Two of the moths were a good bit smaller than the other.

Their caterpillars have been recorded feeding on 26 different species of trees, shrubs and flowers. Hawthorn and birch are two of its favourite and these are common trees that can easily be grown in a small garden, green space or school grounds.

Adults pass the winter in an underground cocoon and inside they are fully developed. When the soil temperature rises in the spring they emerge into places like my garden.

Later that night I was out bat watching and I found a Hebrew character sheltering on the pillar of a gate. Nearby bats were busy hunting and this moth was been very wise and not moving. The hairs on the bodies of moths can detect the echolocation calls of the bats and they drop like stones to the ground.

Exciting new fun online opportunity with St Mary’s Aid and An Taisce Living Limerick. Tune in every Thursday at 10am for our gardening for wildlife online series. Delighted to have Albert and the support of Limerick City & County Council Community Action Fund to introduce us to the wonderful local flora and fauna that surrounds us. Get involved and have some fun with us! Take pictures or videos and share your learning with us! www.facebook.com/stmarysaid/