wild About Wildlfe: 'Song of the stonechat' - Albert Nolan 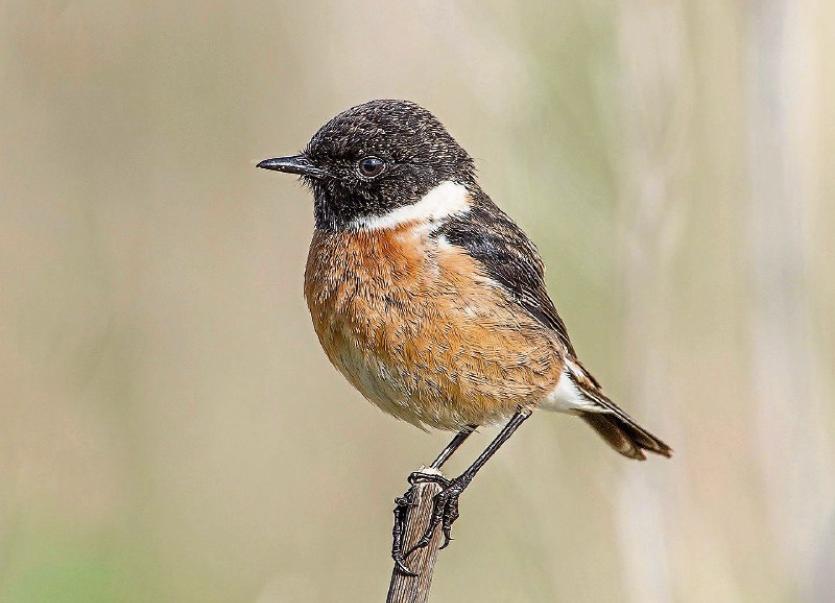 Iwas gently stretching the legs, and using every scrap of cover from the hedge, as protection against the bracing wind blowing of the snow-capped hills.

I kept my fingers moving so that they would not seize up and even the binoculars kept on clouded up. Sometimes when we go for a walk in harsh weather it looks like all of nature has remained tucked up in a hedge or bush. But I have learnt over the years that nature can reward a little bit of patience and determination.

As I crossed an open field I scanned the long line of fence posts. These have more uses than their original purposes. A welcome rest for a telescope, a table for a flask of tea and often a perch for birds. About half way down the fence, I saw a small bird perched on one of the poles. Even though it was far away, I could tell by the way it moved, and short flicking tail that it is a stonechat. A quick peak through the binoculars reveals a young male.

Stonechats can be quite bold and cheeky, and I stand and wait as pole by pole he comes nearer. He stops around ten feet away and I can make out his details of his plumage with the naked eye. After a minute the cold forces both of us to move on, and he lands on the withered stems of angelica, another favourite perch for this species.

It is good to see this bird, as hard winters like the ones in 2009/10 hit stonechats hard, and the population is slowly recovering. Stonechats are birds of the margins and rough grounds. Costal habitats are its stronghold and it is quite common in the midlands. I sometimes find them in urban situations, where land has been left to develop naturally, and there are few gorse and brambles growing. I share a similar taste to this species and have spent many a happy hour exploring overgrown sites in towns and cities.

Mature males have all black heads, a thick white neck collar, orangey breast and brownish back. Females are similar to males, but the black on the head is a dark brown. This can be tricky to see on dull days, and immature birds are like a paler female. They are about the same size as a robin and have a short constantly flicking tail.

The song of the stonechat is very distinctive. It sounds like two stones been banged together giving a “clack clack “sound. This is delivered with plenty of energy and can be heard from quite a distance. On open hills this powerful song would be advantage to attract mates and warn of rivals.

The nest is built in brambles, gorse or bracken and up to five eggs are laid. They hatch after around two weeks and the birds will be fully fledged within a month. Stonechats can have up to three broods during the summer and rear up to 15 chicks. Mortality is high and around 50% of the chicks will not survive to see their second summer. Diet consists of worms, spiders and insects.

Stonechats belong to the large family “Passerine “or perching birds. This diverse family includes over half the known world species of birds. They can grip onto wires or branches using their specially adapted feet. Each foot has three forward pointing toes ad one that points backwards allowing them to get a firm grip.

The scientific name for the stonechat is “Saxicola torguatta “and translates roughly as dweller in rocks.