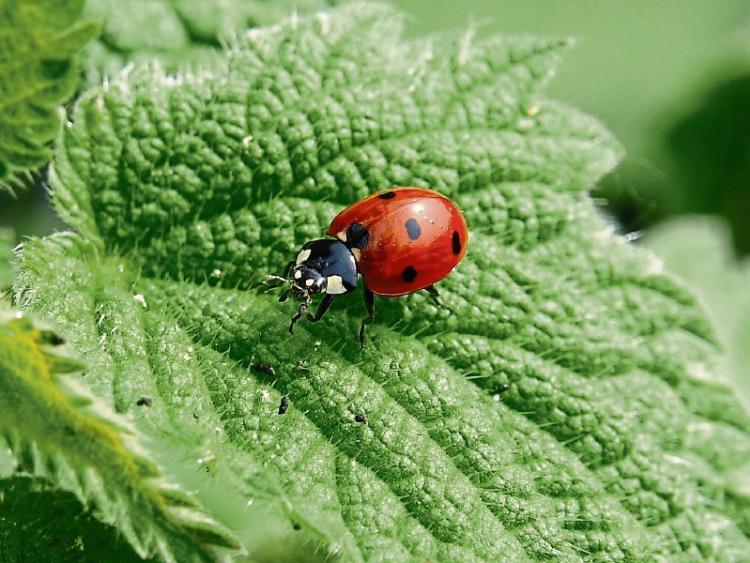 Nettles are the host plant for several species

THE An Taisce Clean Coasts Roadshow came to Limerick on a frosty Saturday morning. The litter pick up was supported by Thomondgate Nature Project and Living Limerick. We have previously been out with Thomond NS and identified this area as needing a good clean up.

The group met outside the learning hub in Thomondgate and my kids also tagged along to help. Pete Beaumont environmentalist and weaver was also there to lend a hand.

Pete is very committed local resident also joined us. He regularly picks up the litter around his community and is also helped by other elderly residents.

Susan who co-ordinates the programme had travelled all the way from Kerry with her family. We were all kited out with high-vis vests, gloves, bags and litter pickers. The plan was to do the litter pick first and then do a short nature walk.

There was loads of litter and while a lot of it was once of plastic there was plenty of items that should have been recycled. Glass and plastic bottles, aluminium cans and a dozen batteries from laptops were all found by the river.

While the amount of litter was disgusting the positive from the event was that a few willing hands can make a real difference. After a few hours the place was looking far better and by having a place tidy it is less likely to attract more dumping.

After we finished we went on a nature walk. There is a nice woodland edge growing at the edge of the green space. This has several good species for wildlife. Buddleia with its long purple blooms attracts butterflies, day flying moths like the migrant silver-Y and insects.

Growing underneath we found the fresh spring flush of nettles. The nettle is the host plant for several species of our native butterflies. The caterpillars of the small tortoiseshell, peacock and red admiral all eat the leaves of nettles.

Traditionally the nettles were also eaten in spring as they were one of the first natural vegetables of the new year. The leaves were packed full of iron, minerals and trace elements that we badly needed after a long winter.

Sycamore was the tallest tree and while not native provides valuable shelter on exposed ground. Susan’s young son while big into wildlife was not sure of his tree identification. This is because he comes from a part of Kerry that has few trees. His dad is trying to address to deficit in the landscape by sowing a native woodland.

Being this close to the river Shannon meant that there were plenty of birds around. Black-headed gulls were the commonest and some of the mature adults were starting to get their chocolate brown heads in preparation for the breeding season.

Overhead we spotted a small gaggle of greylag geese. They were heading of for their morning grazing and gulls and geese use the river like an avian motorway.

Getting involved in cleaning up your community is a great way to increase civic pride and also protect the environment and nature.

An Taisce, Living Limerick and the Tree Council of Ireland: Explore the trees of the University of Limerick on March 21 from 11am-1pm. Meet at the Stables.

Also discover the trees and their wildlife of Curraghchase Forest Park on March 22 from 11am-1pm Meet at the car park.

Limerick Birdwatch: Saturday, March 28 - Outing to Kilfinane, visit some local areas to look for upland birds. Wear warm dark clothing and strong footwear as we will be on some rough paths. Bring packed lunch. Meet at Kilfinane Church carpark at 10am.