Wild About Wildlife: Time to put up bird nesting boxes 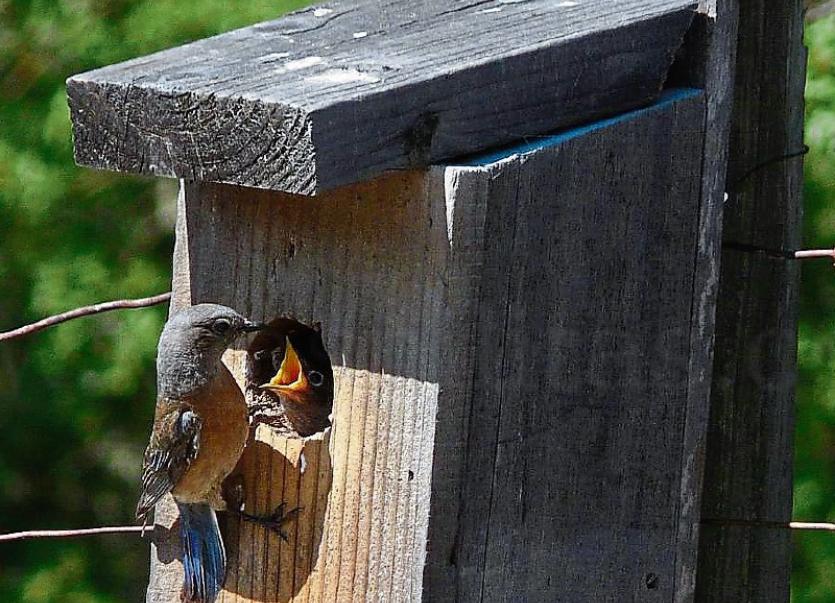 Time for a change: If a bird hasn't taken residence in a box then it might need to be moved to a better location

I don’t mind working outside and I don’t really notice the cold till I get indoors. There is always plenty of jobs to be done in the garden and moving around helps me stay warm. For the last week I have been checking the nest boxes on the trees around the garden.

With the breeding season well over now is the time to clean out the boxes and carry out any necessary repairs. Also if a bird has not taken up residence after one season I like to move the box to another other tree.

I often hear from schools or Tidy Towns groups that erected bird boxes several years ago and have had no luck in attracting birds. Location is usually the problem as birds like a degree of safety that is provided by camouflaging the box in ivy or any climber. Back in my garden the first box I took down had been used by a great tit during the summer. I had watched them early in the year checking out the bird box. They cautiously peered in and popped inside for a quick look. This went on for a few days and then all went quiet.

The following week the male started to sing from the nearby trees and occasionally I could see the female bringing in nesting material. Later in spring the male would appear at the entrance with a beak full of fat caterpillars for his hungry family. He had gathered these from the nearby oak, alder and hawthorn trees.

The nest now in my hands was really well made and lined with soft hairs to keep the chicks warm. I carefully put this into a box and it will be used at nature walks and talks.

Cleaning the boxes is really easy. Don’t use any harsh chemicals. I just give the box a good scrub with a wire brush and some hot water. I leave it in the sun to dry out, with the lid open for plenty of fresh air.

I try and put the bird box back up within a week or I usually forget about it. Before I would have nailed or screwed the box onto a tree. This can create an open wound on the tree that allows diseases in. Current best practice is to use tying wire, or cable ties and this allows this material expands with the tree, rather than cutting into it. For Tidy Towns groups the adjudicators also frown on nails and screws in trees.

I also have a few opened fronted nest boxes and these attract birds like robins and blackbirds. Last spring I moved one to a spot where blackbirds have nested in a low hedge at the base of the trees. The male took the hint and he was showing great interest till the resident robin intervened.

There was great chackling from the blackbird and a few scuffles and my money was on the larger blackbird. But to my surprise the robin prevailed and they raised two broods of chicks there through the summer. The blackbird occasionally passed by landed on the box did his business and with a loud call flew away.

I have already planned to put up a few new boxes and the local Men’s Shed are building these. Sheds have been a brilliant support to tidy towns and schools and many communities have their boxes proudly displayed on trees.

Limerick Birdwatch: November 23 from 9.30am- 12.30pm at Curraghchase Forest Park. A look for jays and migrant chaffinches, bramblings and hawfinches. Who know what will turn up?

albert.nolan@rocketmail.com or 089 4230502. Albert is also available to do walk/talks with schools and community groups