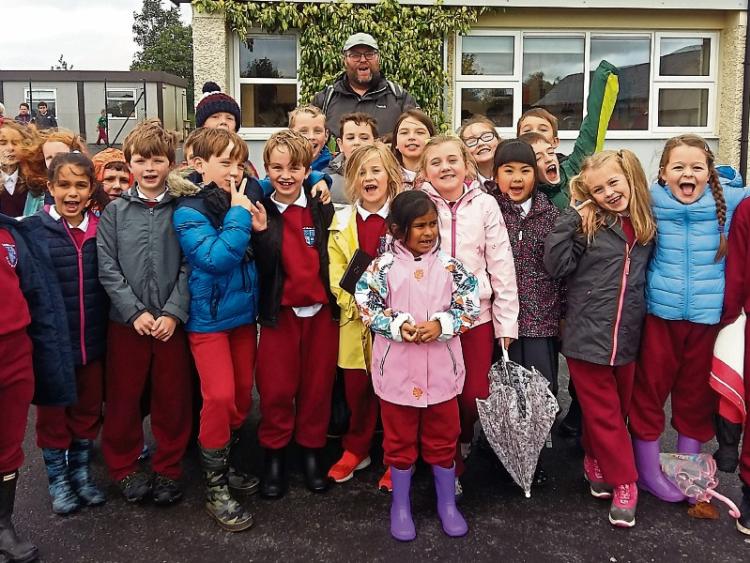 Going on a tree hunt at Monaleen National School

THE forecast was for periods of rain, but that did not dampen the enthusiasm of staff and students from Monaleen National School, as we celebrated National Tree Week.

The school is working hard on its biodiversity green flag. Over the last two years, they have enhanced the school grounds for nature. Awareness has been spread throughout the teaching staff, students and wider community of parents. This is achieved by nature announcements at assemble and notes home to parents. The green school notice board also keeps everyone up to date around environmental matters.

Monaleen NS is developing into a fabulous natural amenity. There are plenty of native trees that provide food, shelter and homes for many different species. Bird boxes have been put up on the trees and these are suitable for great and blue tits. A mature native hedgerow runs parallel to the entrance and this is full of berries for birds and animals. At the base of the hedge a meter strip has been left uncut. All of the flowers attract bees, butterflies and bugs.

Pollinator friendly flowers like yarrow and poppy have been sown providing nectar and pollen for our hungry insects. One teacher has had her students out measuring the stems and plant growth and this is one class that I would like to attend.

Native grasses are food for caterpillars of moths and butterflies. This is part of the food web that the students learnt about on their walk. Grasses are eaten by caterpillars, who in turn are fed by birds to their hungry chicks. Birds of prey complete the food chain by capturing the young birds.

I brought in a brown long eared bat to show the classes. Bats often roost in holes in trees and catch plenty of insects as there hunt around trees. It was also an opportunity for the students to get up and close to this misunderstood creature.

The students discovered a huge variety of creatures. In then cracked bark of a lime tree they found a two spot ladybirds. She sucks the body fluids from greenflies, and her larva also eat hundreds of garden pests.

Slugs, snails and earthworms were feeding on the leaf litter. These mini beasts help create a healthy soil by eating the leaves and also making air tunnels in the ground. I loved watching the excitement and listening to the shrieks as they allowed these creatures to slime all over their hands.

The bark of the mountain ash tree was covered in delicate lichens. The leafy ones are a side of really clean air as they cannot survive pollution. Each lichen is a symbiotic relationship between an algae and a fungus, and this unique combination allows them to colonise trees, walls and the headstones in graveyards.

On the trunk they found the most amazing caterpillar. It had tufts of long green hairs and it turned out to be a pale tussock moth. This caterpillar had spent the summer feeding on the leaves of deciduous trees, like birch and was on its way to pupate.

Along the hedgerow hawthorn, elderberry and bramble were full of berries. These are eaten by birds like blackbirds, and opportunistic foxes whose diet follows the seasons. The blackberries were just starting to turn, and were covered with a natural mould. Traditionally is was believed that witches on their way to celebrate Halloween, caused the blackberries to decay by bad breath.

Limerick Birdwatch: Plants and insects the importance of been native. Wednesday, October 23 LIT 7.45pm harp. Anneke Vrieling from Feale Biodiversity will give talk on invasive species and their impact on biodiversity.

She was also show what native species of plants are very good for wildlife. Interesting talk for gardeners, schools, tidy towns groups and anyone with an interest in making their community friendlier for wildlife.