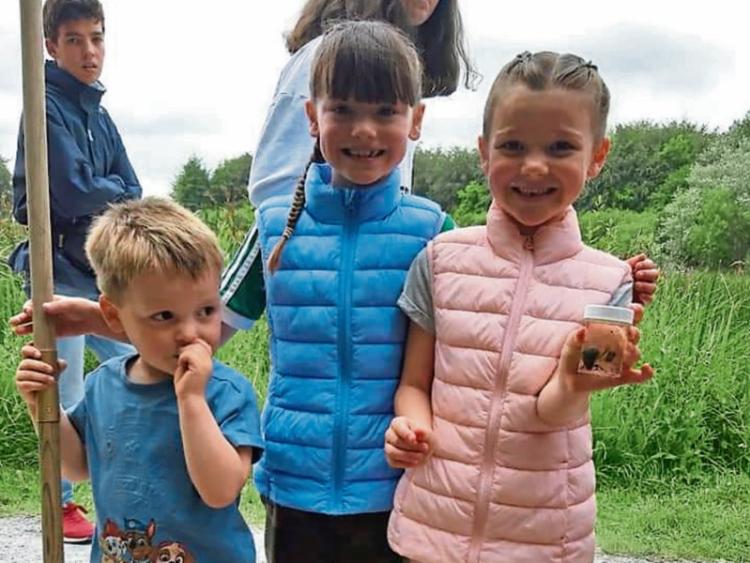 THERE is a subtle change in the season, and I have noticed a slight closing in of the nights.

This is ample motivation to enjoy every minute of the summer and all the amazing wildlife it has to offer. An Taisce Living Limerick returned to Curraghchase Forest Park for a wildlife safari. The early Sunday morning start did not discourage people and over 60 enthusiastic mums, dads and kids turned up to discover nature.

The weather was beautiful and Geoff Hunt and myself were leading the walk. Geoff has published a fabulous book on nature walks in Limerick. It is now out of print but I have a treasured copy at home.

We started off by shaking a few branches of the beech tree. A large forest shield bug was our reward. The bodies of shield bugs resemble the large shields of medieval knights. Meadowsweet was in flower by the side of the path and its fragrance hung in the morning air.

Matt Kelleher who is a forester manages Curraghchase. Over the last few years he has been pioneering a new method of managing the extensive grasslands which has paid dividends for wildlife. Along the edge of the pond dragonflies, bees and butterflies find food and shelter in among the long grass and flowers.

He has left a new section this summer and it was full of wildflowers and especially orchids. Insects are thriving here and we caught ringlet and meadow brown butterflies. Also a delicate damselfly, spiders, solider beetle, bumblebees and leaf hoppers. This management is a real inspiration, and if you are in any doubt about leaving grass uncut pay a visit and the benefits will be revealed.

Next we found out about the creatures that live under the water. They are equally as diverse, in body shapes and lifestyles. The most dramatic creature was a massive great diving water beetle. I remember finding one years ago by the side of the road with a class and we at first we thought it was a cockroach. They fly on damp nights, and often crash land on the roofs of cars that they mistake for water.

Another amazing insect were the larva of dragonflies. These veracious predators spend up to two years under water and they feed on other insects, tadpoles, fish and even each other. Like a true alien they can shoot out part of their mouth called a mask and this seizes their hapless victims.

Kids and adult took turns with the nets and the trays were surrounded by eager families. Leech’s, case caddis flies, whirly gig beetles and water boatmen or back swimmers all provided hours of entertainment.

Along the bordering reeds Geoff caught some dazzling damselflies. Common and azure blue, emerald and large red glistened like jewels, in the sunshine. Out on the water we saw a moorhen chick and the swans with their growing cygnets.

After a hectic morning we had a very refreshing tea, and food at the De Veres Café. Even here nature paid a visit and a painted lady butterfly, landed on the table. These are migrants all the way from Africa, and this is a good summer for them.

A final surprise was in the bathroom where the walls were covered in moths. They were attracted by the night-time light. I rescued a few moths and later identified them, as a riband waves and footman.

An Taisce Living Limerick: Saturday, July 20 from 11am-1pm. Wildlife Safari Curraghchase Forest Park. Meet at the car park. Join us as we hunt for the insects of summer and discover the flowers and grasses that they feed on.

Sunday, July 21 from 11am-1pm. Wildlife Safari Adare Village Park. Meet at the gazebo in the park. Join us as we hunt for the insects of summer and discover the flowers and grasses that they feed on.

Thursday, July 23 from 8-11pm. bat and moth night Castleconnell. Meet in the car park near the playground.