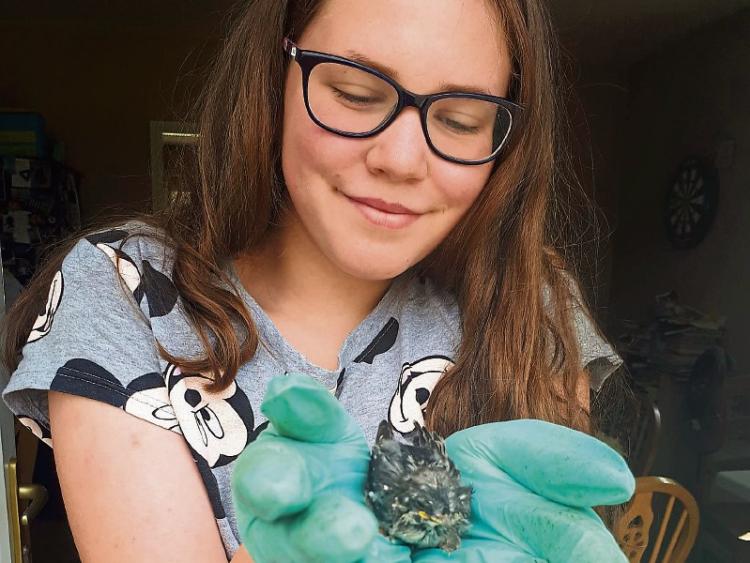 The house martin like its cousin the swallow makes an epic journey every summer from Africa to Europe. Abigail pictured with little Hope

I love getting calls from readers, and hearing their stories, questions and challenges from around the natural world.

A few days ago I got a call from a secondary school teacher who is very interested in nature and I have linked up with her students a few times as they developed a pollinator garden in their school grounds.

Her question was not around her students and wildlife but about nature closer to her heart. Her story begins when the house martins return from Africa and build their mud nests around the eaves of her two-storey house. They make a big mess, but with the patience of a mother, she has put up with the seasonal mess. In her own words, they have travelled all the way from Africa to spend the summer in her garden and they also help by eating thousands of flies.

The birds are natural engineers, and build up their nests in stages. They also use the mountaineer’s adage of maintaining three points of contact for the strongest grip. This is why they build in the apex of roofs and porches.

But nature is not without drama and her highest nest collapsed in the baking sun. Three of the four chicks were killed, but miraculously the last survived. Helen was in a panic as to what was the best course of action. She has two dogs who would kill the chick.

At first they tried putting it in an old nest on the window. The parents took no notice although they did return and vainly circled around, searching for their family. This was a critical investment for them. The trip to Africa is full of dangers and their chicks are their future. It takes around three weeks to construct their nests.

But sometimes fate has a habit of intervening in the lives of animals and this lucky chick was taken under the wing of Helen’s daughter Abigail. With a child’s loving attention she has been feeding it bloodworms and spoons of water. The chick has a fluffy coating but Abigail was worried that it might get cold and keeps it warm in her bedroom at night.

Abigail has even refused to go shopping in order to mind her baby. So far the new member of the family is feeding well and they are going to try to source insects in the pet food store.

The chick needs to be fed throughout the day and if all goes to plan it will join the rest of the house martins for their return migration.

If you do find a fledging and it is fully feathered and in no danger, from traffic or animals leave it alone. The parents continue to feed their chicks for a few weeks after they leave the nest. The fledgings spread out to avoid predators and the parents take good care of them

If the bird is in danger, move to a nearby shrub or tree and watch from a distance. The parents will be nearby. Do not take home as they need a lot of care and we don’t have the right foods in our homes.

I am thrilled that Abigail is so interested in nature and I am looking forward to receiving updates on Hope’s progress.

Living Limerick: Saturday, July 6 from 6.30-8.30pm at the Wildlife Walk in Knockfierna, Ballingarry. Meet at the Rambling House car park. This walk will explore the birds, insects, plants and stories found on the beautiful hill of Knockfierna.

Wildlife Walk: Curraghchase Forest Park on Sunday, July 7 from 11am- 1pm. Join Living Limerick as we reveal the insects, plants and birds that live in the forest park. Pond dipping, bug catching and suitable for kids. Bring your own net and container and see what you can catch.

Limerick Birdwatch: July 13 from 10am-12pm. Nature walk along the Blackwater River to UL. Meet at car park past Burlington Fitness.