Wild About Wildlife: Swallows mark the first of summer 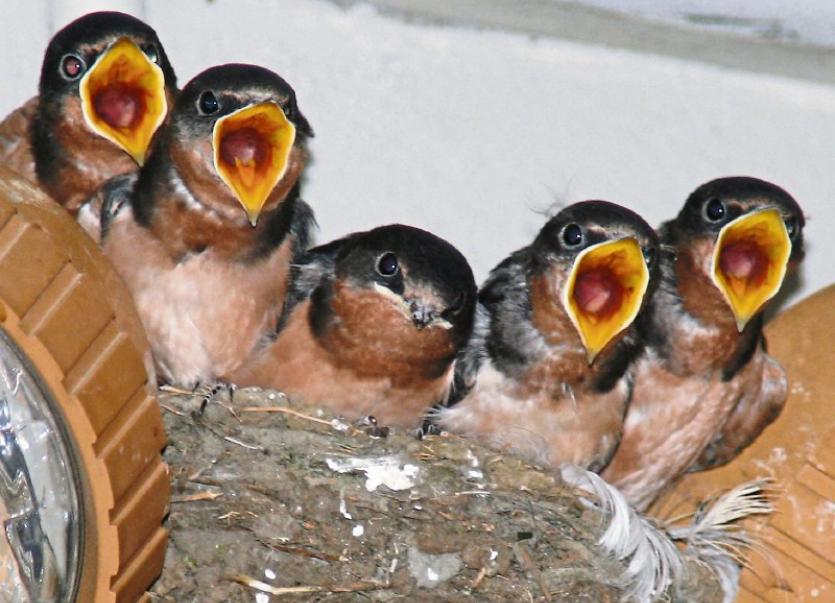 That time of year: Swallows love well protected spots for their nests

THE spring is late this year, is a comment, I have often heard, in recent conversations.

The fine week in March, lulled both creatures and man, into a rush of activity. This was quickly dispelled, by a sudden cold spell, and gardeners would have been wise to heed the old adage of ‘never cast a clout till March is out’. In other words don’t sow your seeds or crops too early.

Bluebells continued to flourish, but have finally started to yield to the onset of summer. I have been waiting patiently for the swallows to arrive to my shed. They are in the surrounding villages, and some of the nearby farm buildings.

I was with a school last week, celebrating the first of May with a nature walk that uncovered the hidden wildlife all around them. This is an important festival, stretching back into antiquity. The Celts celebrated Beltane, or great fire, and marked the return of the long days, the fertility of the soil and the season of plenty.

Boys and girls were sent out to gather yellow flowers, like primrose, celandines and buttercups, that symbolized the bright yellow sun and these were placed on the May altar in the school classroom.

Back on the nature walk, we counted three swallows out the front of the school. They were flying around and occasionally, one would stop and land on the electricity wire.

He would sing for a few moments, before taking to the wing.

We could tell they were swallows, by the long tail streamers, the red under the chin and a bluish back. Under the eave of the community centre, Housemartins provided a good contrast. They were repairing their mud nests, and we could clearly see the large white patch on their back. Their tail is also more of an M shape.

The swallows were flying in and out of a small opening in a farmer’s shed. We watched as they flew towards the small gap at breakneck speed. The students were sure that they were going to crash, into the wall. But at the last moment the brakes came out and they gently landed and disappeared into the depths of the shed.

Outside there was a big commotion, as a hunting kestrel, started to hover near the swallows. They immediately went on the attack and repeatedly dive-bombed the kestrel. At first he ignored their efforts, but he had to keep on moving as the attacks grew in intensity. Eventually he gave up, and moved to another location, and hopefully less harassment.

The teacher and students, who had been watching this aerial battle, gave out a cheer as the little swallows vanquished the hawk.

Flies are the main reason the swallows undertake their epic journey all the way from Africa. Travelling over 200 miles each day, it still takes around three weeks, for the first swallow to reach our shores.

The spring and summer creates an abundance of insects, and the females can put on enough weight to lay their eggs, and raise their family. With insects declining across Europe and Ireland, it is a worrying time for the swallows, and all the other birds who rely on this seasonal bounty.

Our attitude towards insects is to spray, swipe or squash and this despite their vital role in keeping the planet healthy. The adult insects and their larva are vital pollinators, recyclers and decomposers.

This summer, why not create a swallow feeding station in your garden, community or school. Patches of wildflowers, and native hedgerows attract swarms of insects for birds to feed on. We have far too many neat and manicured lawns that provide no value for nature. For me leaving some places, with long grass, is more than compensated by having the swallows flying above my garden.