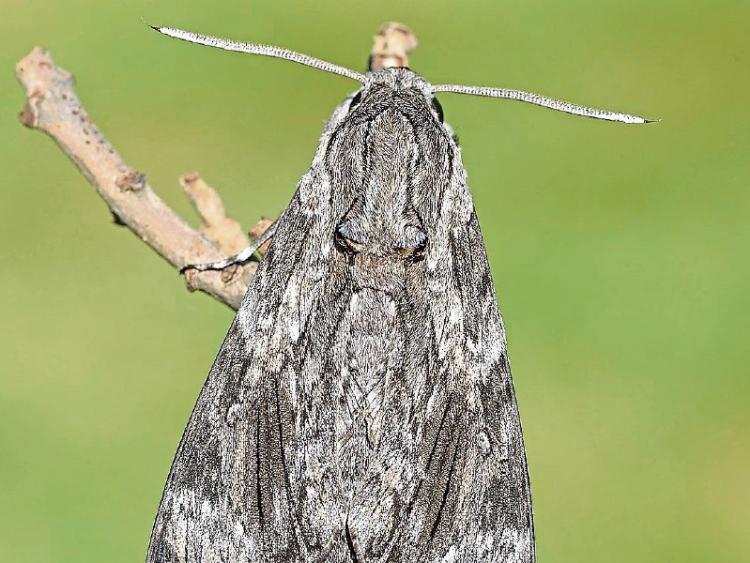 The massive hawk moth is Ireland's largest variety of moth

Storm Hannah was brewing fast across the country and An Taisce’s Living Limerick bat and moth night was looking like a wash-out.

Fortunately we had the use of the community centre in Murroe, and the support of the Tidy Town group. In anticipation of the wind and rain, I had run the moth trap the previous night and had a good collection of moths, to show the group.

In the comfortable surrounds of the room, used by the historical society, we first examined the moths. Moths are a vital food source for bats. Also thousands of their caterpillars, are fed to baby birds each spring, ensuring their rapid development. With over 1,500 species of moth found in Ireland, the learning never ends.

Everyone was amazed by the massive hawk moth. This is one of our biggest species of moth, and if disturbed during the day, it is often mistaken for a bird. Their caterpillars feed on the leaves of broad wood trees, found along hedgerows, and in gardens.

The distinctive mark of their body, looks like the letter N, found in the Hebrew alphabet. The Hebrew characters were looking very faded, and these moths are coming towards the end of their natural life.

Clouded drab lives up to its name, and really has no distinguishing marks or colour.

I had also caught a crane fly, or as it is is more commonly known daddy long legs. Their lava spend up to a year in the soil and eat the roots of various grasses and plants. Any land that is ploughed brings them to the surface when they are devoured, by hungry rooks.

It was still bright, so we quickly ran through the moth and bat Power Point presentation. This introduced the group to the lives of these creatures. It also highlighted projects that groups like Tidy Towns, schools and householders can do to attract more wildlife.

With the sky starting to darken, we ran through how to work the bat detectors. Bats use echo location, when hunting, and the detector converts this into sounds we can hear, and with a little practice identify the bat species.

One man regularly sees bats around the hall, and they could be roosting in the roof. Also there is an old farmhouse next door, and this also looks like a good location for a roost. First we listened for any bat social calls in the hall, but the rain outside was too heavy.

We decided to open the side doors, and listen and look for any bats. While we were waiting I played some bat calls, on my phone. The warbling calls of the lesser horseshow bat sound like something from another world.

We had one possible sighting of a pair of bats, and judging by size and flight they were probably leisers.

The rest were birds, like rooks and jackdaws, who were been tossed around by the wind as they tried to land, in their trees to roost, for the night.

I explained to the impatient kids that nature, does not always perform, but that we will be running more bat and moth nights, over the summer, and keep a watch on Living Limerick and Limerick bat group’s social media pages for upcoming events. With the winds picking up I was glad to be heading home.

Limerick Birdwatch: Sunday, May 12 - National Dawn Chorus at Curraghchase Forest Park. Walk through this forest area, listening to the chorus of birds claiming their territory. Sean Doyle will be there to help identify the bird by their individual sounds. Meet at the car park in Curraghchase at 4.45am sharp.