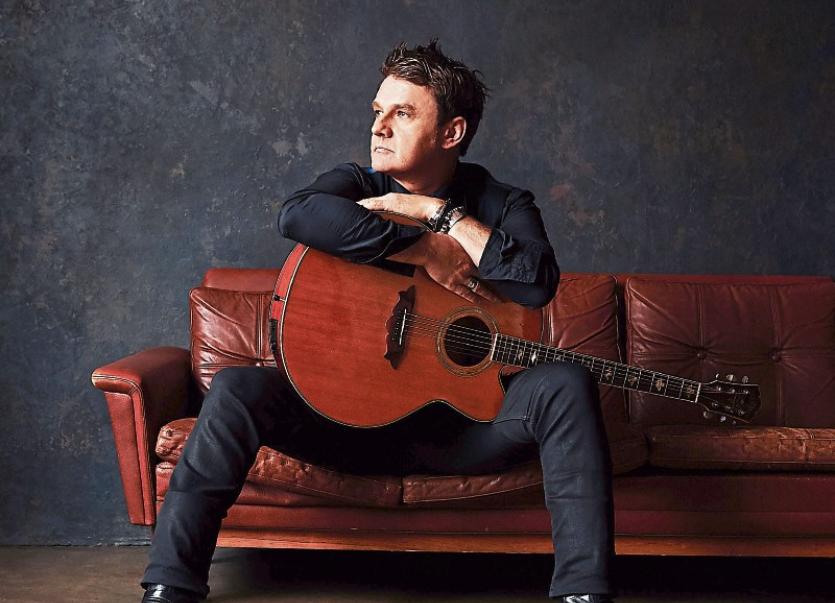 The Limerick man has been focusing on his own singing career more closely in recent times with last year's Lighthouse Keeper topping the Irish independent album charts.

Crafted in the studio he converted from a building dating to 1814 on the banks of the Thames in Greenwich, London, it will be followed next year by another solo album to which Don, from Ahane, is putting the finishing touches.

In between and around these albums, and the producing and songwriting that remains an integral part of his work, has been another project, bubbling away in the background for the most of five years now, occasionally coming to the boil and ready finally, this week, to serve up to the public.

It is literally a labour of love, and not just Don's love, but a litany of rock 'n' roll greats including Paul McCartney, Paul Brady, Gary Brooker of Procol Harum and Nick Mason of Pink Floyd among many others who made up what Don has dubbed McCullough's Fusiliers.

The only Irish man who performed at Woodstock, Henry McCullough was born in Portstewart, Co Derry and quickly earned a reputation on the showband scene in the 1960s for being "handy" on the guitar.

So handy, in fact, that he was invited to join Joe Cocker and The Grease Band at the iconic US music festival in 1969. Later he became the lead guitarist in Wings, Paul McCartney's successful second act after the Beatles had split.

Performing on the original soundtrack of Jesus Christ Superstar and appearing on Pink Floyd's seminal Dark Side of The Moon album were other highlights for a man Don calls a gifted guitarist, but more importantly "a lovely, lovely human being".

"Rosalind Scanlon who used to run the Irish Centre in Hammersmith booked me for a gig there in 1998 - I was early on the bill," recalls Don.

"Anyway, through her and a guy called Kevin Nolan, I was introduced to Henry and we started corresponding.

"I think the initial connection that I would have had with him was Henry being the only Irishman performer at Woodstock and me having written for Richie Havens, who was the opening act at the festival.

"So, I started corresponding with Henry and we'd have these long phone conversations late into the night, the kind only musicians have, you know.

"Anyway, he was coming over to do some recording in London and I invited him for dinner at my place in Blackheath.

"We had a wonderful evening sitting outside on the deck and we played guitar and, coincidentally that was the night that Linda McCartney died - the 17th of April 1998.

"Soon his phone started ringing nonstop, because journalists figured out where he was and everyone was looking for a comment on Linda, so it ended up being a bit crazy, he had to turn his phone off.

"So, that was my first real interaction with him and we were great friends from there and he just had a God-given talent.

"I mean you were in awe when he played the guitar, no matter whether it was in your living room, or you saw him on stage, he just had a way of interpreting songs that I've never seen or heard.

"I'm not exaggerating, I've come across a lot of guitarists, he just had an ability that you couldn't quantify.

"I guess that's why he was in Wings with Paul McCartney and Joe Cocker and The Grease Band, you know."

Their friendship flourished for years, but then came the terrible news in 2012 that Henry had suffered a serious heart attack and further complications had left him in critical condition.

He eventually became well enough to return to his home with his wife Josie, but, was, Don says, plugged into various machines and respirators. He soldiered on for four more years before he eventually died in 2016.

"I would go to see him whenever I was up there but it was heartbreaking to watch him deteriorate the way he did. Josie had him at home but she was fighting a constant battle with the NHS and the local council about carers. It got to be very depressing.

"The last time I saw him was early in 2016 and a month later he passed and I was thinking, 'this happens so much in the music industry for some reason'.

"You get these absolute rock legends and they end up struggling. It's the saddest thing. Maybe not so much the artists, but a lot of the time the people in the bands who brought so much to the table of their own talent, but didn't get rewarded for it."

The situation planted the seed of an idea in Don to try open up some sort of an income stream for his friend.

"I'm not good for much," says Don, "but I'm an ok songwriter, so I thought what if I find a song and try to get some of the people that loved Henry to perform on it, so that's how the whole thing started off and this was in 2014 when he was still alive."

A chance encounter with Pink Floyd drummer Nick Mason who was in Don's studio recording a track got the ball rolling.

When they got chatting, Don realised Nick's connection to Henry ran back to the 60s when the latter was in a band called Eire Apparent, which had supported Pink Floyd on tour, and learned to his surprise that Henry had appeared briefly on the famous Dark Side of the Moon album.

It was enough to spur Don's project into action.

Henry and Don had in the course of their friendship written a few songs together and while Don admits a lot of them "weren't the best", there was one that would definitely work and so 'Live Long Rock 'n' Roll' became the vehicle this supergroup would board.

When he was sent Don's acoustic take on the song, Nick got back to him the same day saying he loved it and they should record it.

Slowly but surely Don's deep connections within the music industry opened other doors, to performers united by a deep love and respect of Henry.

A guitar track was laid here, a Hammond Organ there, months rolled in to years as the widespread contributors and their schedules slowly filled in around each other and more people who had worked with or toured with Henry became involved, like Paul Carrack, Albert Lee and Chris Stainton, men who had played with Emmy Lou Harris, Eric Clapton, The Who and others.

The big fish, however, was Paul McCartney and to land him, Don roped in Dave Robinson who had run Stiff Records (Elvis Costello, Madness), and Island Records and had promoted Jimi Hendrix.

"And I said, 'well you're here, Dave, because I really need you to get Paul McCartney. I need him to play bass on it, not to sing on it, just play bass'.

"'Here's the way I look at it Dave, if I had been in a band with somebody, and the person in my band had become ill, no matter what it was, wouldn't you play a bit of bass on the track'?

"'Definitely,' he said, and I guess maybe four or five days later, he called me and said 'send on the song, he wants to hear the song'.

"Soon after the word came back, 'love this song' and so we waited until he was back from tour in the US, and he did it in his own studio in Hog Hill Mill.

"And Paul just brought magic to it, man, I mean the bassline on that track is incredible. He actually did three different basslines and that's the one I ended up picking, but he played it on his old Hofner violin bass, you know the one he made famous on the Beatles albums, it really just jumped out at me. Sometimes I just listen to it on its own!

"When you love somebody and you respect them as a musician, when you come to that session, you bring love but you also bring this magic, like McCartney, the way he played that, as far as I'm concerned, that's one of the best bass lines I have ever heard.

"That only comes from somebody that had been in the same band as him that had loved him, that's the start of creativity that's brought in that sort of situation," says Don.

There were more twists in the road however, chiefly when Don learned that Joe Cocker, who had been slated to do the vocal on the track had suffered a stroke, from which he never recovered.

The project which had progressed by slight degrees now seemed to have ground to a halt and Don wondered whether it would ever come to fruition.

Then Gary Brooker - who had sung one of the most famous songs of the 1960s, A Whiter Shade of Pale - and who had known Henry for decades was suggested as an alternative and the spark was lit again.

The Procol Harum frontman arrived in Don's studio and nailed it in two takes. After that it was finishing touches and now the song performed by McCullough's Fusiliers will be released as a single this Friday August 16 and form part of an album of Henry's work called Ballywonderland, to be released on the same day.

It will, Don hopes, help provide some income for Henry's widow Josie, but importantly also burnish the great guitarist's legacy.

"My mother said to me years ago the prophet is never recognised in their own country and there is a lot of wisdom in that. In any other country he would be put into the Rock and Roll Hall of Fame, yet it's incredible that somebody with his talents we're having to fight for recognition for him."

Now, with 'Live Long Rock 'n' Roll', Don and the rest of McCullough's Fusiliers have something to go to war with.