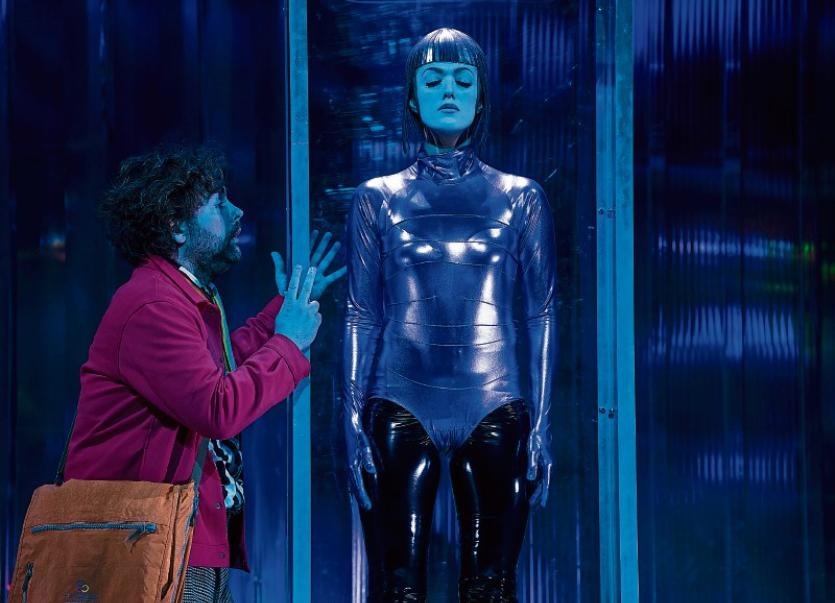 Hoffman and Olympia - Julian Hubbard and Claudia Boyle - in the opera

TAKING one of the grandest of grand operas and reworking it as a modern tale is no small feat, but it certainly helps when the original story was filled with a sci-fi atmosphere.

The Tales of Hoffman, by Offenbach, focusing on a lovelorn writer with little luck in life, is a “big-hearted opera that wears its emotions on its sleeve”, according to Fergus Sheil, artistic director with Irish National Opera, Ireland’s newest opera company, who are producing it.

Written by 19th-century French composer Jacques Offenbach, the work is based on three macabre stories by the romantic German writer, E.T.A. Hoffmann, each dealing with a failed love affair.

The slick new production by Tom Creed transposes the events of the opera into the 21st century, using modern influences such as TV series Black Mirror as inspiration. Creed says that idea for the show was to do something “ambitious and spectacular” and then take it on tour to ten venues around the country, part of the new company’s remit.

“It is the story of Hoffman, who is a writer, and he doesn’t have a lot of luck with love or life and he tells these stories to a group of friends while drinking with them, and the opera is framed with this idea,” he said.

At its heart, the production utilises the superb skills of soprano Claudia Boyle to play the love interests of Hoffman as she deftly morphs into the women, present and past, that he obsesses over. It also has “some of the most luscious, heartfelt and touching music of the romantic era”, according to Sheil.

Creed adds: “We have tried to take this fantastical opera from the end of the 19th century, this time when Europe, how life and science and technology had changed, and look at some of those ideas in a contemporary way.

“We are looking at a range of contemporary influences, to try and find a way of putting the opera on stage in a way that is very faithful to the story and to what Offenbach’s original intention was, but also make it live again for a contemporary audience.

“It is funny that more than 100 years later, what things look like have changed, but the ideas that people are exploring are very similar.

“It is full of extraordinary feeling and this idea of how we persist in trying to find love and connection against all the odds. And also the idea that Hoffman, even though his life is such a mess, is able to transform this pain and suffering into art,” he adds.

The Tales of Hoffman comes to the Lime Tree Theatre this Saturday. See www.limetreetheatre.ie.

One narrator, drunk, and the story of the women in his life...'The Tales of Hoffmann' opens this Friday at the @OReillyTheatre before heading off on nationwide tour. Full venue and booking details here ➡️ https://t.co/TriHJY5IzQ #INOHoffmann pic.twitter.com/X2Ryf3sdHd