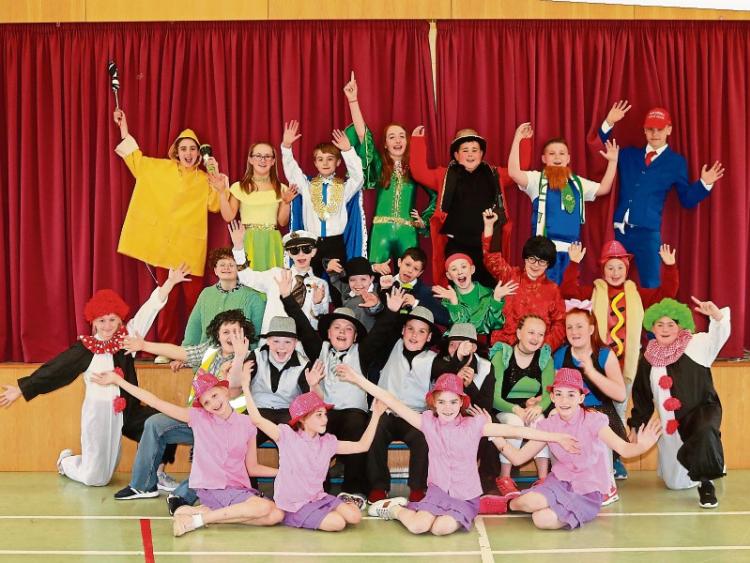 Some of the young stars who will appear in ‘From Moyross to Mars’ on Wednesday and Thursday Picture: Michael Cowhey

IMAGINE what would happen if celebrities and characters like Beyonce, Donald Trump, Pat Shortt and RTE’s Teresa Mannion were sent to Thomond Park to audition for a spot on the first human colony on Mars?

Well, a new original school show to be performed by students at Corpus Christi School in Moyross does just that!

Written by teacher Fionnuala Bromell, fifth and sixth class students are set to debut ‘From Moyross to Mars’ at the Millenium Theatre at the Limerick Institute of Technology on Wednesday and Thursday this week.

“The children absolutely love it, they have been rehearsing for months,” Ms Bromell said.

“Everybody in fifth and sixth is involved and it’s a wonderful experience for them, working in a team and supporting each other.”

The idea behind the show is that it's time for the maiden voyage from Ireland to Mars and the first people to go have to be chosen, Ms Bromell explains.

“We’re sending all different characters from all over the world to auditions in Thomond Park in Limerick city.

“We have the Mayor of Limerick in charge of the auditions and they need two leaders so they decided to send Kim Jong-Un and Donald Trump.”

Mrs Brown, Michael Flatley, Beyonce and Conor McGregor are the judges who decide who gets a spot on the rocket, she added.

“All the chefs audition; Gordon Ramsay auditions but unfortunately he loses. Nigella Lawson auditions but she loses. Eventually the Jumbo Breakfast Roll Man, Pat Shortt himself, auditions and he wins a spot so he gets to be the chef on the rocket to Mars.”

“When they get to Mars then, they meet the Queen of Mars and all the aliens. The whole idea of the story is that scientists discover water on Mars and they realise that even though they are on a different planet, that people are the same all over and the aliens have the same problems that the humans have themselves.

“They make great friends and the Jumbo Breakfast Roll Man cooks for everybody. They eventually lose Kim Jong-Un and Donald Trump in space! And when they come back, they bring all their stories.

“The students are so funny and so talented. We’re very proud of them.

“There’s singing, there’s dancing, there’s acting. The children collobrated with the show as well, with the characters that will go on stage.”

“All the teachers in the school are involved, as well as staff and parents. Everybody is involved.”

Tickets are available through Corpus Christi School or can be purchased on the door, for €5 or five for €20.