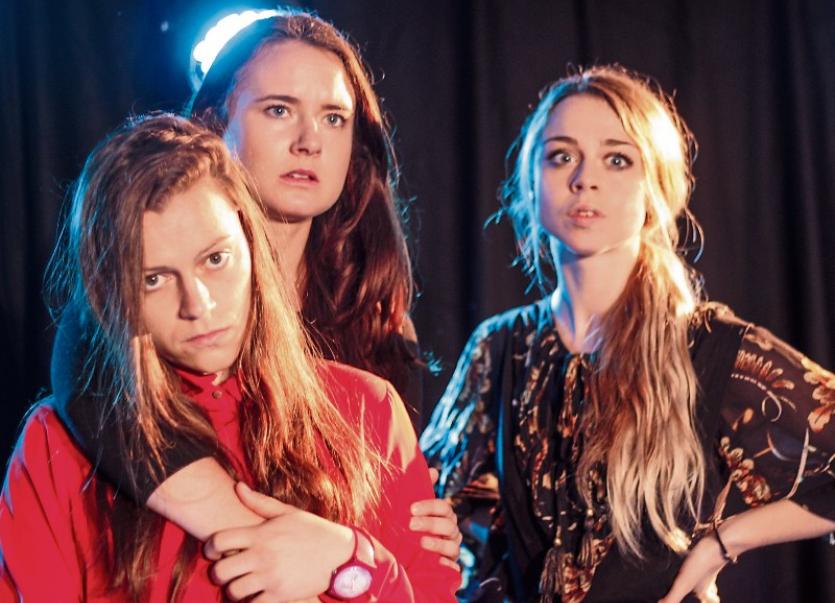 The Friday Night Effect: Three girls on a wild night out face danger, but the audience will be responsible for their fate – starring Eva O’Connor, Mary O’Loan and Annette O’Shea

ONE Friday night out, a perilous situation, and five choices to be made.

That’s the premise behind a production by Sunday’s Child Theatre Company, called The Friday Night Effect, which is coming to the Belltable next week.

The interactive play, by Clare native Eva O’Connor and Hildegarde Ryan, follows three young women on a wild night out in Dublin. By the end of the night, one of them will be dead, but can the audience save her?

“At five different points in the play, we pause the acting, and then we ask the audience to vote on what they would do in the character’s situation. So we have a democratic vote, and then the play proceeds based on whatever option they chose,” said writer Eva, who also stars in the play.

“For all the options, we have the corresponding scripts, and the action plays out that way. There are 32 different ways that the play could go, many combinations of scripts.”

The story changes depending on what the audience chooses, so the scripts were “quite a challenge” in the early days of development.

“You can never really predict what an audience is going to go for. The questions that we ask are about all kinds of moral decisions. It’s about three girls on a night out, and one of them is suffering from some kind of mental health issues. So a lot of the questions are based on responsibility or what you think is a wise choice to make in a difficult circumstance,” said Eva.

“We try to get the audience thinking, and it’s so interesting, because sometimes you would think older people would be more conservative and young people would make the reckless decision, but often it’s the opposite. You can’t really tell what way it’s going to go.

“People get into discussions among themselves, and it’s really interesting to see how it plays out - when we did it in Edinburgh, a woman stormed out because she felt really betrayed by her group’s decision,” said Eva.

“In the beginning, people can be quite flippant with their choices. But towards the end, the story becomes more serious and the audience realises that the fate of the characters is in their hands. By the time we get to the last choice, people are on the edge of their seats. You are complicit in the story, and you’re responsible.”

The unusual format means that people “who aren’t savvy or usual theatre-goers are still coming and finding that they’ve had a really good time”, she added.

Despite their base in London, the small cast has a number of Limerick names, including Pius McGrath, Johanna O’Brien and technician Tara Doolan.

Tickets for the 8pm show next Thursday, February 8, are available from www.limetreetheatre.ie.