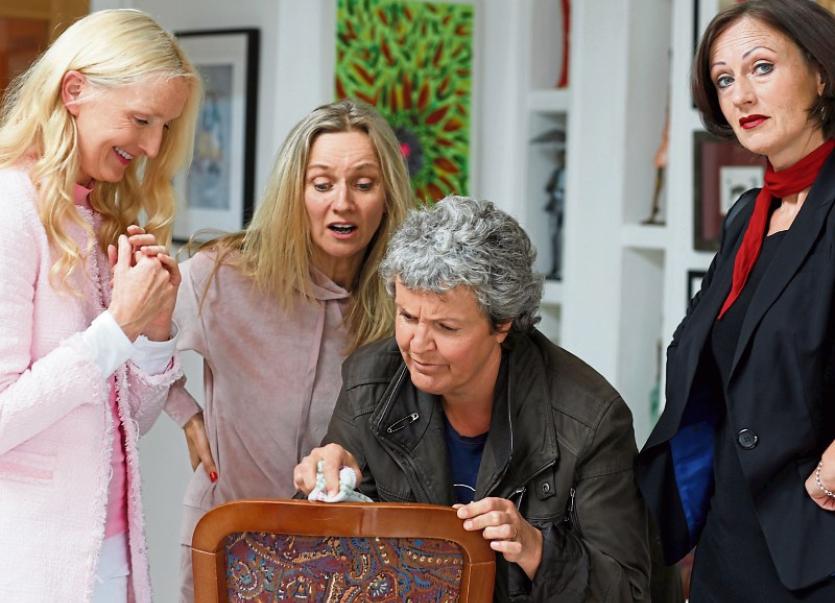 BOOM? Claudia Carroll, Isobel Mahon, Rose Henderson and Karen Egan in the play, which takes to the Lime Tree stage this Friday night for one night only

A COMEDY set at the top of the so-called economic ‘boom’ comes to the Lime Tree Theatre this Friday night.

BOOM? by actress and playwright Isobel Mahon and directed by Caroline FitzGerald opens in the 510-seater venue this Friday night ahead of a six month run with an American cast off-Broadway in New York.

An entirely female operation - cast, director, producer, and stage manager - the off-Broadway run is a major coup for Glenroe and The Clinic actress Mahon, who herself features in the play, along with a starry cast of Claudia Carroll from Fair City, Rose Henderson, also of Fair City and Father Ted fame, Maria McDermottroe, Glenroe and Killinaskully and Karen Egan of singing-comedy group The Nualas.

A comedy-drama about the impact of the boom on the central character Selma Mae - Mahon herself - her relationships and her family, it is billed as “a hilarious, touching and bitter sweet evening of drama and comedy from a fantastic cast”.

“This is a play for anyone who ever had a bad hair day, may never own a helicopter and knows the difference between an abstract sculpture and a bicycle helmet,” says the accompanying press material, while reviews have hailed it as a “comedy which is light and fun but packs a razor sharp edge”.