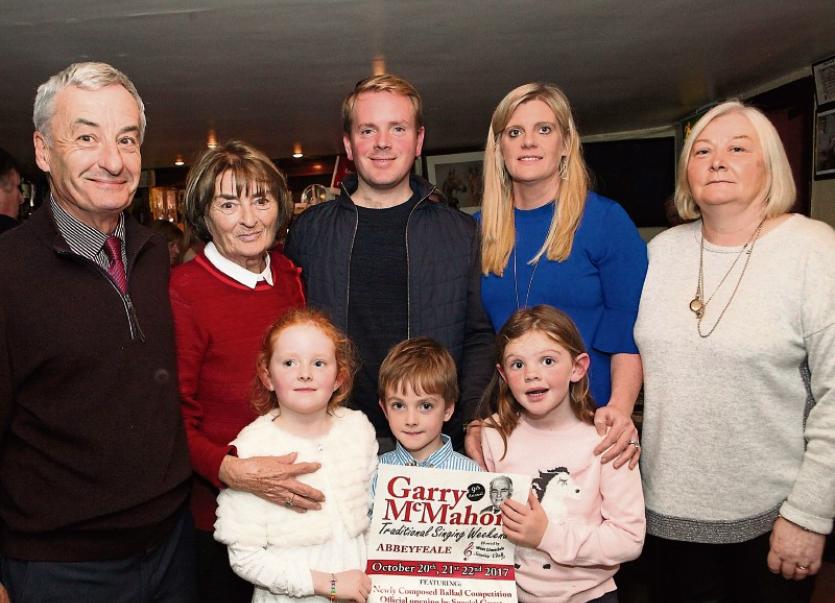 THE ballad is a powerful vehicle for the full range of human emotions, according to Owen McMahon,  speaking at the launch of the Garry McMahon Singing Weekend.

“Ballad singers and ballad makers  chronicle people’s sorrows and joys, their whimsies and their loves,”  he said.

Composed by ordinary people, farmers, tradesmen, spalpeens and the like, ballads have a venerable tradition and the aim of the Garry McMahon Singing Weekend is to ensure that tradition lives on for generations to come.

This year’s Singing Weekend will run from today, Friday, October 20 to Sunday, October 22, and will, Owen promised, provide a slice of what his father, Bryan McMahon called the “Irish dimension to life”, where the cut and thrust of banter mix with song and story, and old friends and neighbours meet.

The weekend is hosted by the West Limerick Singing Club under the chairmanship of Tomás McKenna and was established to preserve the tradition of balladeering as well as honouring the memory of Garry McMahon, singer and ballad-maker who was a regular performer at the club’s monthly sessions.

“This is our ninth weekend,” Mr McKenna said. “And we have a mighty weekend lined up.”

People travel from all over Ireland and even from abroad, he added. A man with long roots in the tradition himself, he believes  the singing weekend is hugely important.

“It resurrects old songs that might be dying or dead, and it is a place where people come together and become friends.”

“They have to do with places, with place names, with events and people. These songs are like history books. They are invaluable.”

This year’s weekend will be formally launched on opening night by Kerry footballing legend, Tomás O’Sé now of the Sunday Game and one of the well-known brothers who have worn the Kerry jersey with distinction for many years.

On Saturday at 11am,  there will be a trip to Garry McMahon’s native Listowel. In this new addition to the programme, participants will be introduced to the songs and stories of Listowel by Owen McMahon.

On Saturday afternoon, at 3pm, the newly composed ballad competition will take place in the Ramble Inn and on both Friday and Saturday night, at 9.30pm, there will be singing sessions in both Leens Hotel and The Ramble Inn.

On Saturday evening also Abbeyfeale Choir, directed by D. Dennsion, will sing Garry McMahon’s Aifreann na Riochta in the local church at 7pm. Then on Sunday afternoon at 3.00pm at Fr. Casey’s GAA Club a special tribute and presentation will be held to honour Tomás McKenna, currently chairman of the West Limerick Singing Club and one of its driving forces since its inception.

Tomás is a contemporary of Garry McMahon and from the Corca Dhuibhne area. A fluent Irish speaker and a Kerry footballer, he is passionate about traditional songs and singing and is well known for singing songs composed by his late friend, Garry.

Also in attendance for the weekend will be Seamus Brogan, singer and lilter who originally hails from Wexford, but now lives in London. Joe O’Connor, Philip Enright, Micheál O’ Sé and Catherine Broderick Murphy will also be among the singers.