Music a way of life in Broadford 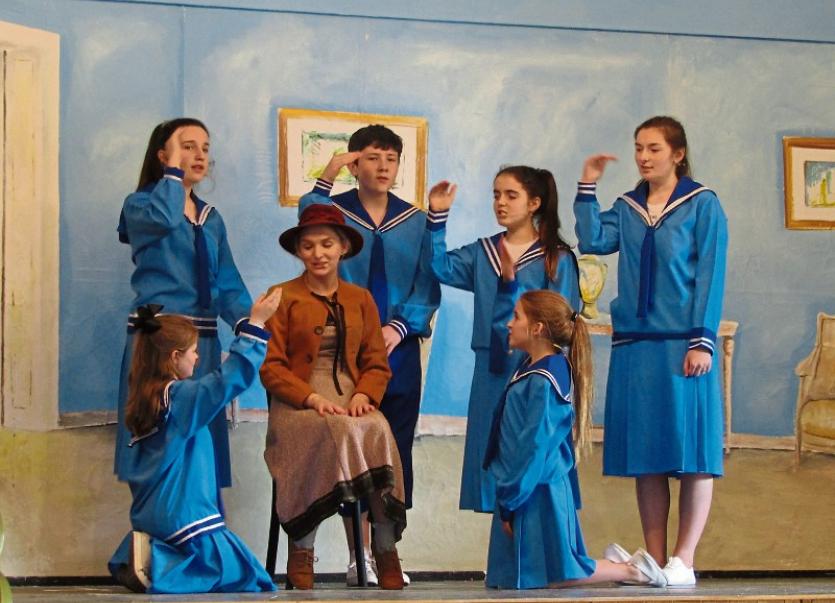 Maria, aka Ide Forde, and the cast of the  Von Trappe cast members  pictured in advance of the opening of The Sound of Music in Broadford this Thursday night

HE is Broadford’s Mr Music Man, their very own Noel Pearson and Colm T Wilkinson rolled into one.

And for the past three decades, John Pierce has masterminded the community’s annual musical.

Now, however, having reached the grand age of 80, he is toying with the idea of hanging up his producer’s hat.

“I am tempted to give up every year,” he admits.

But year after year, the principals and the chorus have continued to gather in his warm farmhouse kitchen where the first weeks of rehearsals normally take place with John and musical director Margaret O’Donnell at the helm.

“The first thing we do is get the songs off,” John told the Limerick Leader this week, just days before the curtain goes up on this year’s musical, The Sound of Music. “We go through all the songs, everybody together, the chorus and principals.”

This is the system John adopted way back in 1989 when he first took over as producer, having “given a hand” to producer John Jones in two previous musicals.

And although along the way, John Pierce has himself performed in some musicals, most notably as Fagan in Oliver, he prefers, he says, to stay in the background. “I am in the background this year and it is a great relief.”

A love of theatre, John reveals, first brought him to musicals and continues to keep him there. “If you didn’t like it, you wouldn’t be doing it.”

Over the years, he reckons, some 300 people, young and not so young, have performed in the Broadford musicals.

“People like to perform,” John says in answer to why the musical tradition continues to hold sway. “This is a great chance for them to perform.”

Shy people, he reckons, are the ones who seem to be able to shine on stage, “not the people with all the talk and guff”.

And, he adds: “There are people who were born to sing. It makes it easy if they are willing to let go. The talent is there only to find where it is.”

John’s great gift, according to community activist Kathleen Barry, is his ability to identify talent. “He has identified and developed so many young people,” she says.

Mary Lee Geary, the chairperson of the Broadford Development Association agrees. “He would have started a lot of young people, including soprano Mairead Buicke,” she says. But she also pays tribute to John’s gift of finding a place for all would-be performers, even if they couldn’t sing.

But as well as being as being a social gathering for the performers, the annual musical is always a great occasion in the community, she adds. And over the years, it has contributed to the community in very practical ways as well, such as providing new chairs for the hall. “He always gives back,” says Mary. “All the money is ploughed back into the community.”

“We would be terribly sad if John gave up.”

In many ways, the Broadford musical has also been a family affair for John. His wife Helen welcomed the cast into their large kitchen and their daughter Maire Sexton has been doing the sets down through the years. John’s son Mike also plays a role: this year, he is on sound. And a new generation has now come along to keep the tradition alive. Four of John’s grandchildren, Alan and Rachel Power, Claire Noonan and Laura Sexton, are in roles as Von Trappe family members in this year’s Sound of Music.A nephew, Martin Pierce plays Captain Von Trappe with Ide Forde as Maria and a big bunch of nuns.

Margaret O’Donnell is the second half of the music partnership that has kept musicals alive in Broadford. “They have done fantastic work,” Mary Lee Geary declares firmly.

And from her first outing as musical director back in 1990, Margaret says it has been a wonderful experience. That musical was The Sound of Music and this year, she explains, is the first time they are repeating a musical. Over the years, Broadford has staged, among others, Calamity Jane, Oliver, Joseph and his Amazing Technicolour Coat, Showboat, Chicago, Nunsense and Anything Goes.

But picking which musical to stage is not easy and the job usually falls to John. “We can’t do anything that might require elaborate staging,” Margaret explains. “The stage is too small.”

But she is very clear about the value of the musicals to the local community. “An amazing number of people have had their first experience of singing and stage work through the musicals in Broadford. And there is a great sense of community about it.”

“John is the driving force,” Margaret says adding: “He is a wonderful performer. He is made for the stage.”

But she continues: “John’s great talent is that he has some knack of uncovering new talent wherever it is. He is a great scout.”

That “fresh blood” has been a lifeline for the musicals, coupled with the stalwarts who look forward to it every year and who have been involved all along.

Each year, she explains, people put in the hard work and it is constant practice which helps to reach a standard. “You want to achieve a high standard, of course,” she explains. “It’s down to plenty of hard work.”

But she asserts: “There is a great sense of achievement.”

John agrees. “It is nice when it all comes together. It is very satisfying.”

But because there are now plans afoot to renovate the hall, it could well be out of commission as a venue this time next year. “If you drop it for one year, there is a fear it won’t come back,” he says.

But whether this year’s offering is his swansong remains to be seen. And is there someone else who would take the tradition forward?

“I haven’t thought about it,” he says. “Maybe if I pulled out, somebody might take over.”

But, he adds, it would be a shame if the tradition were to be lost.

The Sound of Music opens this Thursday in Broadford Community Centre and runs again on Friday, Saturday and Sunday night. Tickets cost €10 and €5 for children.