Windings revelling in a lyrical honesty on new album

Steve Ryan plumbs inner depths for Be Honest and Fear Not 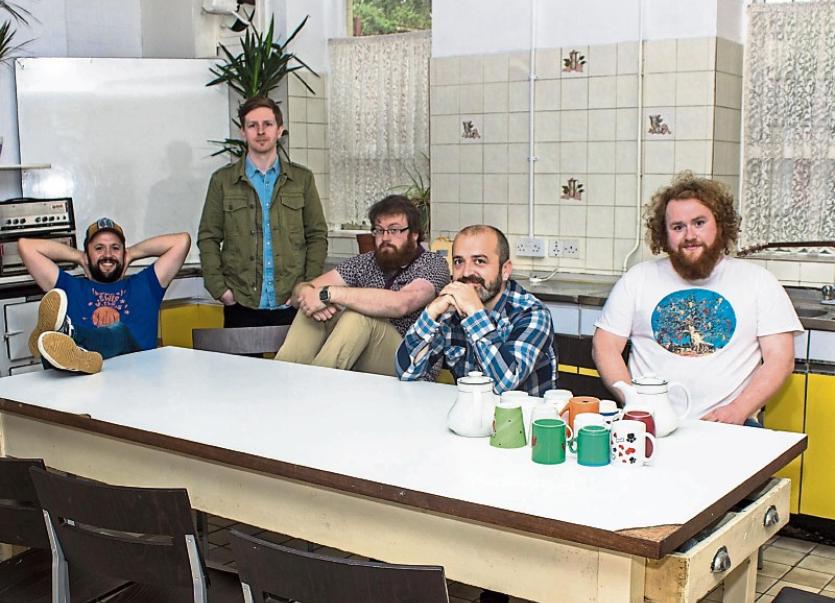 BE HONEST and Fear Not, Windings fourth full studio album, is both at once the Limerick’s band’s most intensely personal and supremely confident offering to date.

From funeral attendance musings to – whisper it – the closest that frontman and songwriter Steve Ryan might ever come to releasing a love song, these songs bookend an album that soars sonically and sees a band at the height of their powers.

In fact, it is just the second Windings album recorded with the definitive line-up of frontman and songwriter Steve Ryan with Brian Meaney, Mike Gavin, Liam Marley and Patrick O'Brien. The other was 2012’s I Am Not the Crow, which narrowly missed out on the Choice Music Prize.

Ryan forced himself to open up lyrically, indeed to raise up the vocals in the mixes of the songs so that they could be heard by the listener. It wasn’t easy for the man who used to wear a gasmask when performing in his alter ego in Giveamanakick.

He was influenced, no “inspired”, by the sheer honesty of the lyrical wordplay on Rusangano Family’s album, on which he played guitar and with whom he works at Music Generation.

“How up front and honest, a lack of fear, this is their personal expression and that is what it should be. And that was it, I just kind of went with that then,” says Steve of Rusangano.

The Windings album is full of the expression of hopes and fears, doubts and confusion.

“It is all of that - lyrically, it is everything is going on in my life, or has gone on, thoughts of the future, literally just everything and going with that title - it was inspirational,” says Steve.

“I was listening to a couple of other bands that were putting themselves out there lyrically, and it was almost uncomfortable or shocking, because the bands I grew up listening to, grungier bands, they were just singing about misery.

”I didn’t want to do that, I didn’t want metaphors - I just wanted to say what I had to say, and it felt like the music was going that way anyway and it suited it. I wanted people to hear what I was saying, I spent of time on the lyrics this time.”

This wasn’t an easy process fo the songwriter, he admits, it was hard to be so raw and honest.

“Yeah it was difficult, it is. There are far more difficult things in life, don’t get me wrong, but to actually sing this in front of people or put this on a record that people are going to listen to and maybe ask me about...there was trepidation,” he admits.

He need not have worried as the results are stunning. Album opener Ambivalence Blues, with its refrain “And when it comes to meeting new friends, try not to think of it as making up numbers for your funeral”, is among the finest song this band have recorded together. The gentle, yet slightly acerbic, Late Praise, boasting the vocals of Aoife Donnellan and harp skills of Jean Wallace, see Ryan sing “to know, that you were there to hear, is what makes me”.

It is a band filled with melody, and no desire to compromise.

“We don’t need to, nobody is going to ever ask to. 'Can you shorten your songs? No. Ok',” laughs Steve.

“Windings is our thing. And we make the most of it, because we are quite proud of it - it is not like we are trying to take over the world and reach Coldplay status, that is not what it is about. It is our form of expression, it is our full time hobby.

“It has been a natural enough process - we haven’t rushed anything, as you can probably tell, but we are very happy with the way it is going.”

The album was released on Limerick label Out On A Limb records, and in keeping with Windings’ DIY ethos, everyone pitched in on the recording – primarily done at Attica Studios in Donegal with Tommy McLaughlin – and creating the artwork. The album’s title was taken from the floor of a hardware store in Ennistymon.

“I had seen it years ago,” says Steve. “It kept popping into my mind – I was confused by it, because I am not really into inspirational quotes or self help stuff, but that one is just so wide open to interpretation as well, because one person’s honesty is another’s rudeness,” he laughs.

Perspective, starting a family, a new career – all of these things were an an influence on the songwriter.

“Yeah, life has changed, I have taken a 90 degree turn in the past three years and that has definitely made me think about everything to this point.”

In between recording and releasing the album, Steve returned for a one off tour with Keith Lawler for Giveamanakick, which has always “co-existed” with Windings, he says.

“It was great, great to play with Keith, it was amazing, brilliant,” he says.

“If anything it was too fast and it was a really ultra busy time for the two of us. We loved it and it was great to be able to do it - I can’t see us doing it again, it was really tough.

“They have always co-existed –  I am delighted and appreciate how lucky I am to be able to do that and have people around to kind of support it. Not everybody gets that chance, so I have it good. I know that as well.”

- Windings launch their new album with a gig in Dolan's Warehouse this Saturday night, with support from Jinx Lennon. See www.dolans.ie.