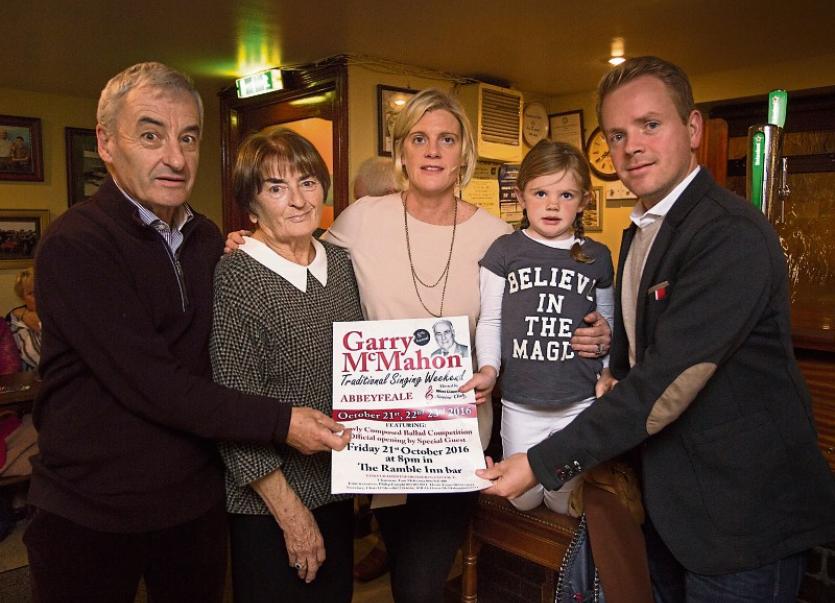 Owen, Joan and Rossa McMahon pictured with Teresa and Orlaith McAuliffe at the Garry McMahon Singing Weekend launch at the Ramble Inn, Abbeyfeale. The festival takes place from October 16-18

HUNDREDS of people are expected to attend the Garry McMahon Singing Weekend which will take place in Abbeyfeale later this month.

And while the three-day festival carries with it a large element of enjoyment and entertainment, it also has a more serious aim, that of preserving and promoting the traditional songs, ballads and stories of previous generations and passing them down to another generation.

“Ballad singers and ballad makers chronicle people’s sorrows and joys,their whimsies and their loves,” said Owen McMahon when launching the weekend recently, which is named in honour of his brother, the late Garry McMahon who died in 2008.

They are, he argued a way to understand what life in this country has meant, and a means to self understanding and mutual understanding.

And he praised the efforts of the West Limerick Singing Club for their sterling efforts in promoting the singing of old songs and ballads and in hosting the Garry McMahon weekend.

Garry, Mr McMahon said, was a proud member of the club and at the monthly sessions would sing some of his own compositions, such as My own Newcastle West or The Hills around Listowel.

“He would indeed be proud to know that these songs are still being sung not only in West Limerick but throughout Ireland,” Mr McMahon said.

“The Garry McMahon Weekend most aptly takes place in an area where the ballad has always been a considerable force and where the art of ballad making is still very much alive,” he said.

The legendary Kerry footballer, Mick O’Connell will officially launch the Garry McMahon weekend on Friday, October 21 after which the first of many singing sessions will take place in the Ramble Inn.

On Saturday morning, singing workshops will take place under the tutelage of Seamus Brogan, singer and lilter and renowned collector Joe O’Connor and this will be followed in the afternoon by the newly composed ballad competition.

On Sunday morning, the Abbeyfeale Church Choir will sing Garry McMahon’s Aifreann na Ríochta and that afternoon, the contribution of another Gael, storyteller Daisy Kearney will be marked at a special tribute ceremony in Fr Casey’s GAA club.

Daisy was born Daisy Fitzgerald in Knocknasna, Athea but now lives in Ballyhahill But her gift as a storyteller has brought her acclaim well beyond the borders of West Limerick. That gift was nurtured in her parents’ house, a tigh cuairtíochta or rambling house where she first heard many of the stories in her huge repertoire. Daisy is also a long-time member of the Carrigkerry Wren Boys Daisy .

Singing sessions will take place each night of the festival in Leen’s Hotel and the Ramble Inn.

Singers and storytellers and all those who love songs and stories will be assured of a warm welcome throughout all the events of this, the eighth Garry McMahon Weekend.