The Rúnaí is well served in new anthology of his writings

Michael O'Riordan was remembered with affection at book launch in Castlemahon 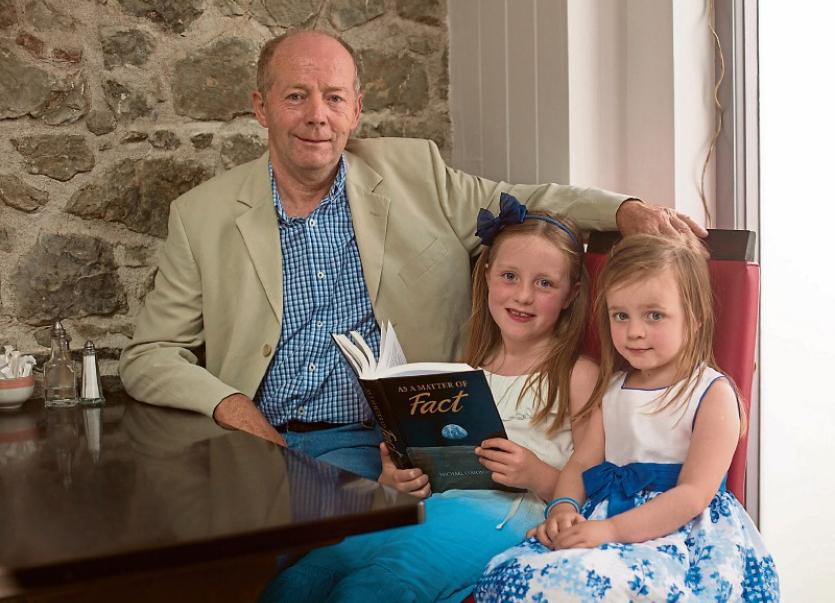 Aoife and Lia Boyce, Patrickswell with their granduncle, Eamon O’Riordan, admiring the anthology of their great-granduncle’s writings, As a Matter of Fact Picture: Marie Keating

HE was known, in life and now also in death, as the Rúnaí. It was a title that became him and he carried it with style. Michael O’Riordan, Rúnaí, the man with the pen and a way with words.

Now, once more, his writings, his memories, his musings and his witty anecdotes have been brought to life again for his readers, transcribed from the pages of the Weekly Observer and the Vale Star into a handsome hardback book.

The difficult task of sifting and editing 16 years of writing was carried out by his son Eamon and the book, As a matter of Fact, was launched in Castlemahon last Thursday where Michael was remembered with great affection.

One of the warmest vignettes of the man however comes from his contemporary and fellow notes writer, Frank Phelan who says, in the foreword: “He (Michael) loved to start a friendly argument about politics, religion, sport or anything that was topical and most mornings after the milk had been delivered to the creamery and the lads were on their way home with the empty tanks, a call to the Rúnaí was a must, just to see what kind of form he was in, because he could put on an angry scowl depending on who was present or he could be in a sarcastic mood which was another put on to get someone going.”

It was when he started writing the parish notes in 1982 that he really started to blossom, Frank wrote.

Michael’s attitude to writing, his son Eamon explains, was to write something nice about a person if you could at all. “He would say that everybody deserved to be named on the page of history,” Eamon recalled this week.

Eamon has dedicated the book to the written word which, he said, paraphrasing Prof Brian Cox, was what brought us from caveman to spaceman.

As a Matter of Fact, however, is not the first collection of Michael’s writings. A similar volume, Beyond the Myths was launched, and sold out, four years ago.

“The first book was good but the second book is super altogether,” said Pat Normile who was MC for the evening in Castlemahon hall where Cllr Jerome Scanlan formally launched the book.

“These articles provide a valuable insight into the way of life in Broadford, Dromcollogher, Castlemahon, Feohanagh, Kilmeedy and even Tullylease,” Cllr Scanlan said. “They highlight the simplicity of life as it was lived.”

There is humour and wit to be found within its covers, he continued, and the writings also reveal the economics of the time, how people survived, how they improvised. “They show the fiercely independent spirit of the area,” he said.

He was particularly taken by Michael O’Riordan’s own census of Broadford in the 1920s, naming all the families, many now gone from the area and listing the many trades, most of which have now disappeared.

But his dips into the past also revealed its restrictions, the councillor said, as he wove his way through the different sections of the book, revealing little snippets and commenting on others.

Cllr Scanlan was not alone in heaping praise on the book. Eddie O’Sullivan, who welcomed the guests, described it as a treasure of folklore and history while Fr Duggan praised Michael O’Riordan’s aptitude as a writer, someone who “left us with an appetite to read on”.

“Books like Michael O’Riordan’s will be there when the mobile phone won’t be functioning,” Fr Donough O’Malley said while Sr Eileen Lenihan also had an eye to the future. “While we have local writers like Michael and Frank Phelan and Margaret Doody Scully, we have people who are actually encapsulating history and events and preserving them for future generations.”

As a Matter of Fact can now be bought in local shops, priced at €20. All profits from the book will be donated to Milford Care Centre.