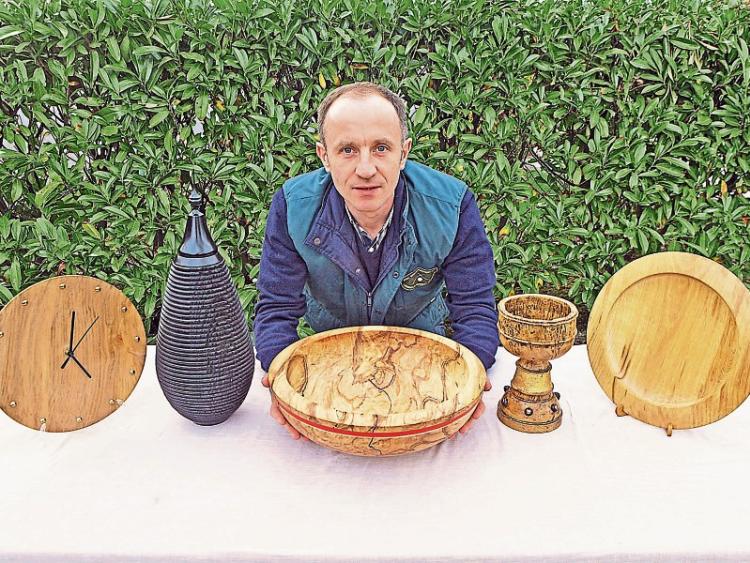 ATER a lifetime working in wood, woodturning still holds its fascination for John Ryan from Ballyneety. “It’s not just about working with your hands. The brain is working away too,” he says.

And there is satisfaction in being involved with a craft whose origins go back thousands of years. “Turned items were found the tomb of Tutankhamun which dates from 1350 BC,” he points out. And nearer home, a cauldron found in a bog in Co Monaghan is thought to be over 2,350 years old.

“In the old days, turning formed part of a wider picture,” John explains. “You could have a turner in some of the (iron) foundries and in some of the big industries.”

But with automation, he adds, a lot of the traditional skills came under pressure and turners had to be multi-taskers and adept at other aspects of working with wood, such as carpentry, cabinet making or joinery.

That, says John, is still very much the case today and now, only a very few are full-time professionals. In the Limerick chapter of the Irish Woodturners Guild, which celebrates 25 years this year, there are only a handful of full-timers, among them Donal Ryan, Barry Lewis and Liam Flynn.

It can be daunting being full time, John observes, and even more so given that many turners are what he calls “earthy” people, not really cut out for commercialism. But, he goes on, most of the Limerick chapter’s 30 or so members are long-time devotees, with very high levels of skill.

It takes a lot of practice and time to develop as a woodturner, John points out. But he believes the work of Irish Woodturners Guild and its Limerick chapter has contributed hugely to honing the skills of its exponents and has been pivotal in saving what was very much a dying craft.

Happily, according to John who is a founding member of the Limerick chapter and its current vice-chairman, the past number of decades has seen a re-igniting of interest. “What we are doing now is more at the art end of things,” John explains. “A lot of our work is one-off and some of the stuff is contemporary art.”

“There is a lot of satisfaction in it,” John continues. “I suppose it is the creative urge. You can see something you have made. You can fashion it to whatever idea is in your head. When you start on a piece, there is a significant amount of concentration involved. One slip could destroy your piece.”

Moreover, he adds: “You don’t really know what is going to happen until the very end.”

It takes time and practice to build up the skills involved, how to work the chisel and the lathe; how to sharpen your tools, how to saw the timber.

A short film showing Liam Flynn at work exemplifies this. Liam, who is from Abbeyfeale and continues to work there, is one of the foremost artists in wood of his generation.

He works mostly in green, ie not kiln-dried, wood and has built up a reputation for his skill in reading wood. When he examines a piece of a tree, he explains, he is looking to see the grain structure. “I am designing the piece as I am looking and I am drawing out roughly what size log of wood I am going to cut,” he explains.

He then hefts his “log” on to a lathe and begins moving it round. “I am reading it. In a way, I am reading the material,” he explains.

His designs rely for their shape on the wood drying or “distorting” in a particular way. But it is only because he understands exactly how this will happen that he achieves his distinctive pieces. “It is an interplay between the material and its natural drying and my own stamp,” Liam says, describing his work. For him, the nature of the wood is not primary. What continues to enthrall him are shape and texture. That, and the fact that there is always something new and fresh to discover. “I am still finding new things. I keep adapting and learning new things,” Liam says.

“My approach,” he goes on, “is changing a little now. I don’t worry about the technical side so much.”

Liam’s work has been bought for some of the world’s most prestigious collections and museums, among them the Victoria & Albert Museum in London and the Minneapolis Institute of Arts. It can also be found in the National Museum of Ireland and in Limerick City Art Gallery and the Royal Dublin Society.

And this Saturday, for the first time in many years, Liam will give a demonstration as part of a day-long workshop to mark the Limerick Woodturners’ 25th anniversary.

Recalling the founding of the Limerick chapter a quarter of a century ago, current chairman Brendan Collins said there were eight or ten of them who got together at the time.

He was an apprentice carpenter but became interested in woodturning and has remained involved since. Their aims, he says, were to raise the profile of woodturning but also to improve members’ skills and techniques.

Over the years, Brendan explains, they have organised day long workshops for woodturners of all abilities. And at every monthly meeting of the chapter, there is a demonstration following which the members go away and replicate the technique for the following meeting.

For Brendan now, woodturning is more hobby than livelihood but the appeal remains and he talks about different woods as if they were friends.

This Saturday’s workshop marking their 25 years will also be a chance for members to showcase their work, Brendan explains. There will be a gallery of work, he says, and a prize for best in show.

The event will take place in the Kilmurry Lodge Hotel starting at 9.30am and a small number of places are available on each of the workshops. Along with Liam Flynn, professional woodturner Donal Ryan from Borrisoleigh will also conduct a demonstration as will Christien Van Bussel, a potter from Holland who took up woodturning when she moved to Wicklow.

Non-members are welcome to attend on Saturday where anybody with an interest in woodturning will be made welcome.

To book your spot or to find out more about Limerick Woodturners you can ring Tom O’Halloran on 086-2770904.