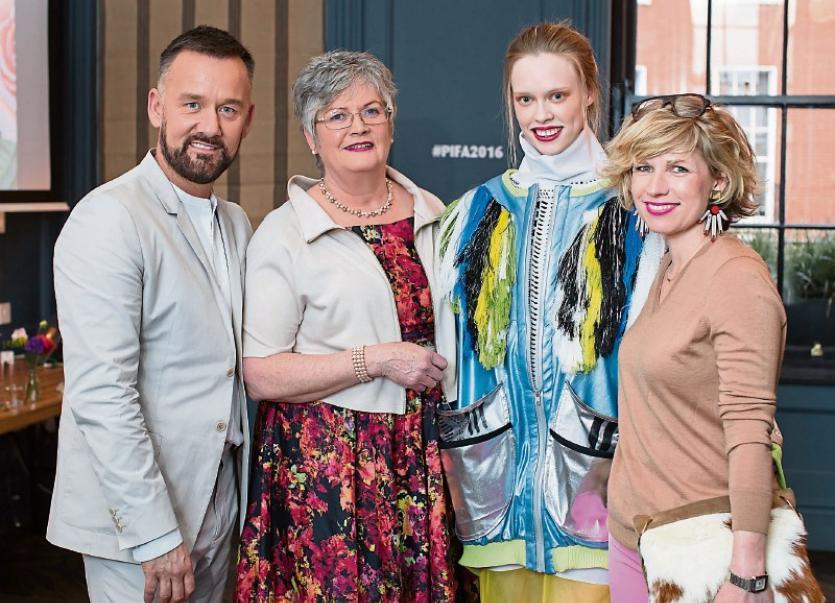 Niamh Mannion's mother Denise collected the Persil Award for 2016 on her behalf, and is pictured with judges Brendan Courtney and Sonia Lennon. The winning design is modeled by Leva Paulikaityte

RANKED among the world’s top 50 fashion colleges, Limerick School of Art and Design has reaffirmed its reputation for molding talented Irish designers, having secured a number of high profile awards in the fashion industry.

The college was once again the only Irish college selected to participate at the recent London Graduate Week, and students’ work was again published in Europe Emerging Fashion Designers.

Other accolades in recent times include graduate Niamh Mannion winning the prestigious Persil Fashion Award which saw her walk away with €10,000.

“I was delighted and very shocked to hear I had won the Persil Fashion Award,” explained Niamh Mannion, who recently moved to New York to pursue a career in fashion.

”The prize and media that came from it will be a great help to me pursuing a career in the fashion industry.”

The 22-year-old who is originally from Kilglass, Co Roscommon is currently working in a bar in New York while she finds her feet in the sprawling city. She said the prize money of €10,000 “will be a great help to support me as I work in New York".

“I also plan for it to fund the making of my next collection, and possibly contribute to completing a master's course in fashion design in the coming years.”

Meanwhile, tickets have gone on sale for the much anticipated Limerick School of Art and Design, LIT, Graduate Fashion Show on Thursday, May 12. The show will take place at the LSAD Gallery where 27 graduates from the largest fashion degree programme in Ireland will showcase their creations on the night.

This year’s students have returned from exciting work placements all over the world including House of Holland, Temperley, and Preen in London, Marchesa and Derek Lam in New York and Farrah Floyd in Berlin. The themes of this year’s show are as diverse as the student’s use of fabric, colour and form including sugar candy, legendary boxer Muhammad Ali, the Greek mythology Circe, deforestation, computer malfunction and the late rocker Kurt Cobain among others.

Richard received the coveted Fashion East sponsorship, The LVMH Grand Prix scholarship and has been described by Vogue as one of the brightest most directional talents around. The student who shows the most unique cut and technical creativity within their collection will win the LIT Award.

Speaking about the upcoming fashion show, course director Anne Melinn, said: “The Limerick School of Art and Design is truly an exceptional college with an enormous amount of talent and a deserved international reputation.

“Our graduates have gone on to work with some of the leading labels in the world including Paul Smith , Marc Jacobs and Alexander McQueen. The students are extremely professional and take enormous pride in their work.”

The Limerick School of Art and Design LIT Fashion Show will take place in The LSAD Gallery, Clare Street on Thursday, May 12 2016.