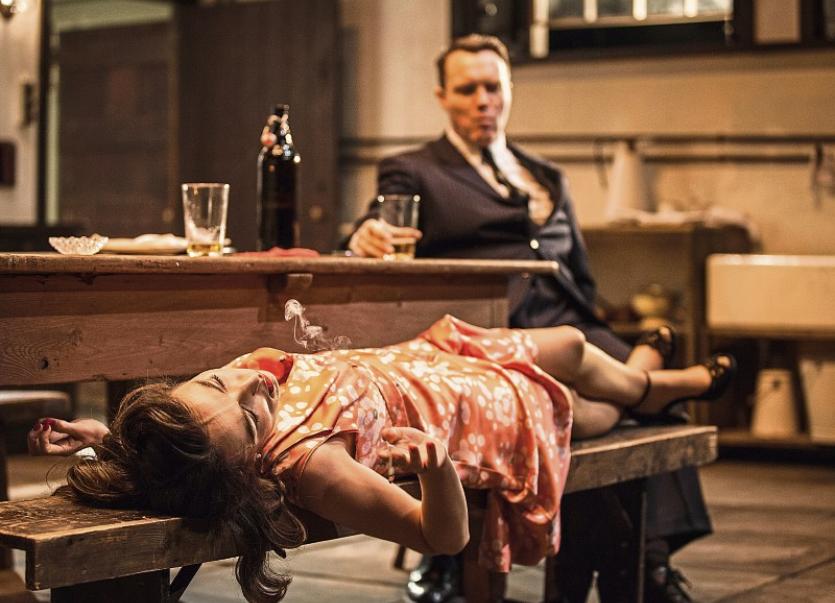 Ciaran McMenamin as the Chauffeur John and Lisa Dwyer Hogg as Miss Julie in the play Picture: Ciaran Bagnall

THE Irish premiere tour of Patrick’s Marber’s play After Miss Julie comes to the Lime Tree Theatre next week.

Marber’s play is a re-imagining of August Strindberg’s 19th century play Miss Julie, a re-working of the Swedish play that has been placed within the context of an Irish setting for Irish audiences.

Originally Marber’s version was set within an English Manor during celebrations for the Labour Party victory in 1945. However Marber has worked closely with Prime Cut’s Artistic Director Emma Jordan and moved the action to Fermanagh during the World War II VE-Day celebrations.

After Miss Julie portrays the complex relationship between chauffeur John and the lady of the house Julie, played by Ciaran McMenamin and Lisa Dwyer Hogg. The ill-fated pair are caught up in a lustful tryst one evening ultimately sealing their fate and the play focuses on the struggle of power between them.

“I am so excited to be directing After Miss Julie – I can honestly say that I think Marber’s rework of this classic play is genius,” said director Emma Jordan of the award winning playwright and screenwriter.

“The placing of the action of the play at such a time of seismic change in Ireland and Britain is truly inspiring,” she added.