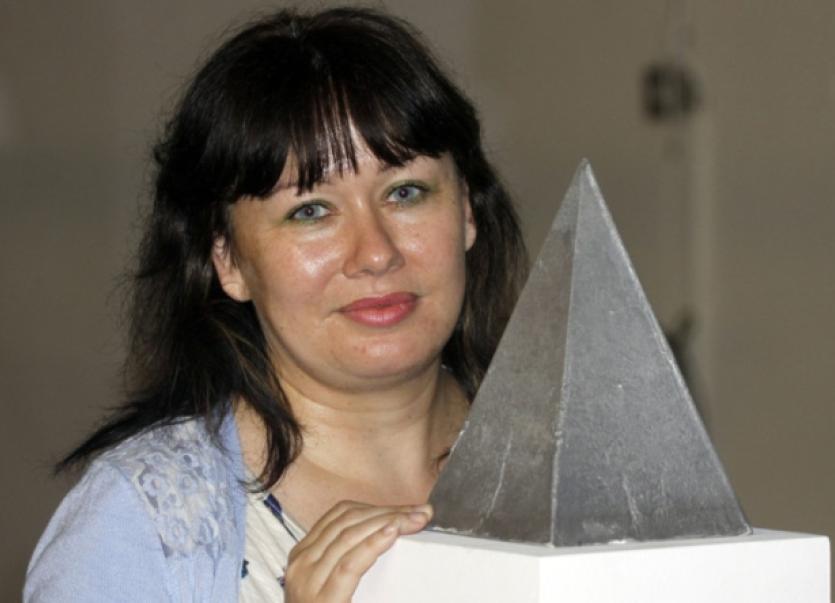 Growing up in Askeaton, in the shadow of Aughinish Alumina, it is not altogether surprising that local artist Michele Horrigan would find inspiration in the giant alumina processing facility.

Growing up in Askeaton, in the shadow of Aughinish Alumina, it is not altogether surprising that local artist Michele Horrigan would find inspiration in the giant alumina processing facility.

Its presence has spurred Michele to create her latest solo exhibition, now on display in the Occupy Space in Leamy House.

Entitled Stigma Damages, the exhibition examines how aluminium pervades modern life, from its origin as bauxite, through the mining and refining process, to the end product which is essential to the functioning of contemporary society. “The exhibition is the culmination of research I have been doing since 2007,” explains the artist who currently lives between London and Askeaton where she is curator of Askeaton Contemporary Arts.

“The initial spur was the refinery in Aughinish. I grew up in the shadow of that and it was in many ways the inspiration for this work.”

She describes the complex itself as “aesthetically quite beautiful”. “It is in a constant state of flux because of the nature of the industry and it is a hive of activity, which is very exciting and inspiring.”

Her research for the exhibition took her to the village of Les-Baux-Des-Provence in southern France where bauxite ore was first discovered by geologist Pierre Berthier in 1821. The reddish-brown rock is the raw material in the production of alumina, which is subsequently processed into aluminium.

Standing on a plinth is a pyramid-shaped piece of aluminium. This, she explains, is an exact replica of the apex of the Washington Memorial. When the famous structure was being built in 1884, it was decided to make the tip for the capstone from aluminium - then one of the world’s most expensive metals. To create her replica, Michele travelled to the Scottish Sculpture Workshop at Aberdeenshire where she worked in the foundry there to craft her own version.

Among the other exhibits is a display case full of discarded aluminium products - drink cans, food wrappers - which were picked up around the area when the exhibition was being installed.

Another display case shows postcards, stamps and banknotes representing elements of the industry, including banknotes from Guinea and postage stamps from Sierra Leone depicting Mickey Mouse working in a bauxite mine.

One of the most striking elements of the exhibition is a video of Michele herself re-enacting a scene from the movie Flashdance in which the heroine works in a Pittsburgh steel mills by day while pursuing her dream of becoming a dancer by night. In her re-enactment, Michelle performs the dance from the film in a field outside Askeaton with the Aughinish facility serving as a backdrop.

That examination of the role and portrayal of women in industry is also pursued in displays of print advertising, brochures and videos relating to the aluminium industry down through the decades.

The exhibition, she explains, gives her an opportunity to “try out some ideas I had been thinking about for a while”.

However, she stresses: “I am not offering a singular voice. I don’t want to lead the audience or the viewer by the hand. I would like them to form their own views. There is a lot to process here.

“There is good and bad in all these industries but the fact is that we need them. Some people take the view that heavy industry is all bad, but it is so embedded into how we live that I think it is unfair to take this stance.”

She adds: “Aluminium as a material is everywhere and you take it for granted somehow but the modern world couldn’t operate without it.”