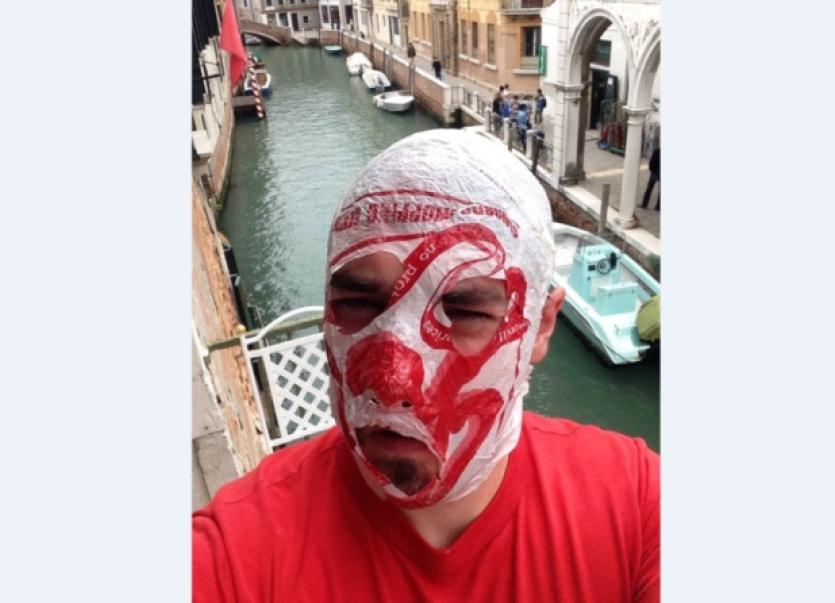 LIMERICK’S Rubberbandits are preparing to “shock and amaze” Venice, as they perform as part of Ireland’s involvement in the high profile Biennale, dubbed the ‘Olympics of the art world’.

LIMERICK’S Rubberbandits are preparing to “shock and amaze” Venice, as they perform as part of Ireland’s involvement in the high profile Biennale, dubbed the ‘Olympics of the art world’.

The plastic bag-wearing duo joined up this week with the Irish entry to the 56th International Art Exhibition, or La Biennale di Venezia to give it its full and proper title.

The duo will perform a “piece of performance art” in Venice, part of the celebrations around the Irish entry to the Biennale, which is being led by visual artist Sean Lynch, who lives and works between Askeaton and London and studied in Limerick School of Art and Design.

Lynch will present a new body of works entitled Adventure: Capital that has been curated by eva International director Woodrow Kernohan, while former City of Culture director Mike Fitzpatrick is commissioner for Ireland at Venice.

The Bandits, Mr Kernohan confirmed, are to “lend their support” to the Sean Lynch Ireland at Venice 2015 party and will give a special performance in Campo Santa Maria Formosa this Thursday night.

Blind Boy Boat Club, in Venice ahead of a show that has been described by the Irish team as “maybe performance art, but not as we know it; prepare to be shocked and amazed”, said that the Biennale was “a place where lots of extremely rich people purchase art from the artist who can use the biggest words to describe their art”.

“We sold the notion of a Mulkear River perch to a Ukrainian copper magnate for 20 grand by describing it as a dialogical intervention on post-modern hyper-real simulacra,” he added.

Asked how it felt to be tasked with performing in Venice, Blind Boy said: “It makes us feel like the brass helmet that Michael Collins wore in the parallel Universe where he wasn’t shot at Beál na Blath. It makes us feel like the bits of plastic on Bono’s sunglasses that keep them from falling off his nose. We feel like every pint that was drank on Good Friday and deliberately vomited back up out of Catholic guilt.”

The Irish team said in a statement that the Bandits would “no doubt pay appropriate homage to performance art, the history and grandeur of Venice and their love of gondolas – pronounced gandala in their native city of Limerick.

“When the Bandits arrive ‘ridin their gandala’, expect to be addressed in a full frontal manner on contemporary issues from their manifesto with their very own rapped version of socially engaged practice emanating from Limerick city, unless they take the wrong canal!”

For the first time this year, Ireland’s entry in the high profile contemporary art exhibition will be located in the in the Arsenale section of the Biennale - essentially the main hall, which is the heartbeat of the festival.

The exhibition, which is supported by Culture Ireland, will subsequently tour to “acclaimed Irish and International institutions in 2016 or 2017” - including Limerick - as Richard Mosse’s The Enclave exhibition did last year for City of Culture.

The Rubberbandits return to their native Limerick for a show in the Lime Tree Theatre on May 23.