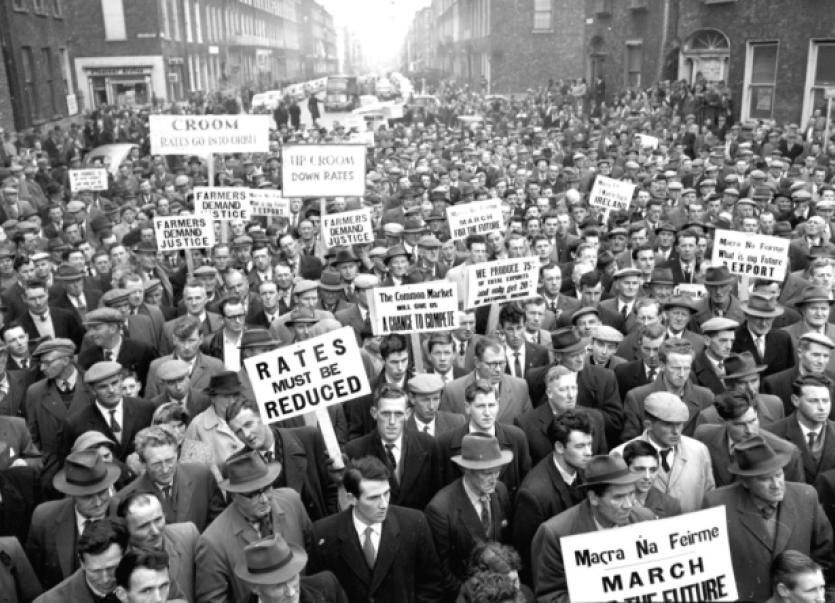 THE Limerick Leader has been capturing local life on camera for generations. Now, writes editor Alan English, the very best of these pictures have been published in a new hardback book that does justice to their quality.

THE Limerick Leader has been capturing local life on camera for generations. Now, writes editor Alan English, the very best of these pictures have been published in a new hardback book that does justice to their quality.

PERHAPS it’s only in recent years that the importance of the Limerick Leader’s photographic archive has been fully appreciated. I’m not sure how true they are, but I’ve heard stories of how hundreds of thousands of negatives were almost thrown away some years ago – dumped in a skip, unwanted.

It wouldn’t have been that unusual: many local newspapers got rid of their old pictures, thinking they had ceased to have any value. How wrong they were.

The latest initiative in our effort to bring the Leader’s unrivalled photographic collection back to life has just been released.

A beautifully produced 256-page hardback book, Limerick Through The Lens, is available in local bookshops and through the Leader office. We are hugely proud of it.

It includes more than 300 of the best pictures ever taken for our newspaper and it displays them to stunning effect. Thanks to the book, these amazing images will now live on, long after they first appeared in newsprint.

As I write in the book’s introduction, it was only in the early 1950s that the Leader began putting news stories on its front page, after more than six decades during which advertisements held sway in what is our shop window.

Perhaps it was no coincidence that the paper’s photographic department was set up around the same time by Donal MacMonagle. Sixty years later, I often hear his name mentioned around and about.

He was a photographer who thought like a news journalist. He knew the power of a picture to tell a story and he instantly established a level of photographic excellence that more than stands the test of time today.

In fact, one of the great joys of this book for me is that justice can finally be done to Donal’s wonderful pictures from the 1950s and 1960s. At the time, newspaper printing methods were nothing like as advanced as today. Thus, the newsprint of the era did not do justice to the clarity of Donal’s beautifully composed photographs, taken with a Hasselblad camera.

Take the picture showing a new boat being blessed by Canon PJ Lee, the former parish priest of St Mary’s in the city. It was taken by MacMonagle and appeared on the front page of our edition dated Saturday September 10, 1955.

Far fewer pictures were published by the Leader back then, so no doubt the staff photographer was pleased to see his shot make page 1, positioned to the left of the lead story, which was about a drunk driver being jailed.

And yet, below the small headline ‘Pastor Blesses Boat Bearing His Name’ it ran across only three columns: nowhere near big enough to do it justice. Now, however, on page 47 in this strikingly handsome new book, this fine picture gets the treatment it deserves, a full page, gloriously vivid.

It captures, with pin-sharp detail, a lovely moment in local life.

When Donal left Limerick for his native Kerry, the Leader’s photographic department was taken over by the youthful John F. Wright, a member of the Buckley family who owned the paper for more than a century. Many of John’s pictures are in the book too and he upheld the standards set by his predecessor.

Unlike many local newspapers in Ireland, the Leader continued to employ staff photographers, who became well known throughout the city and county. The work of A.F. (‘Foncie’) Foley, Dermot Lynch and Owen South is also included in Limerick Through The Lens and I believe the book is a wonderful tribute to their talents.

The more archive pictures we’ve printed in recent times, the more readers have contacted us to say how much they enjoy them. Many’s the phonecall we’ve had from a reader who became quite emotional on seeing long departed loved ones back in the paper, decades after the picture was first taken.

In quite a few instances, they were seeing these pictures for the very first time, as a great many of the images we have in our collection never made the paper first time around. As I’ve said, there were few enough pictures in the Leader of the Fifties and Sixties.

Two years ago, we brought you a series of six magazines covering 30 years of local life as it appeared in the pages of the Leader. Those magazines were extremely popular and are still sought after.

Next, people started asking me if we were planning a book. As it happened, we weren’t, but the paper’s 125th anniversary provided the perfect impetus.

As I also note in the book’s introduction, the selection of the pictures was one of the bigger challenges of my time as editor but I enjoyed every minute of the process, not least because our ace archivists Stephen Lappin, Grainne Keays and Kelan Chadwick kept coming up with fantastic candidates for inclusion.

I freely admit that I’m hopelessly biased, but I think Limerick Through The Lens captures local life during the latter half of the 20th century as no other book does.

- Limerick Through The Lens: Pictures From The Limerick Leader Archive, is now on sale. A 256-page hardback, it’s available in local bookshops and through the Leader office, at €29.99.