Limerick life seen through the lens of an ‘extraordinary photographer’ 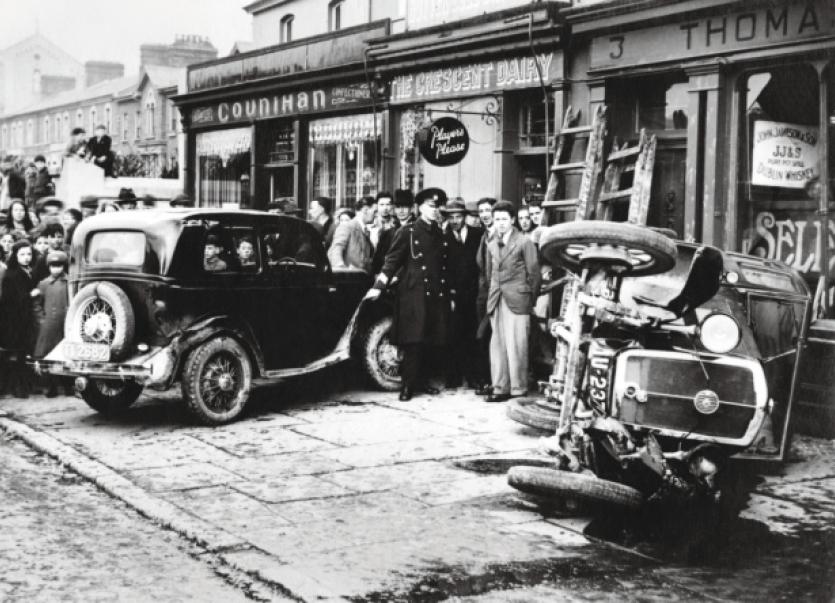 PATRICIA Haselbeck Flynn is fond of a quote by her second favourite photographer, Henri Cartier-Bresson, widely considered the father of modern photojournalism: “We photographers deal in things which are continually vanishing, and when they have vanished there is no contrivance on earth which can make them come back again. We cannot develop and print a memory.”

PATRICIA Haselbeck Flynn is fond of a quote by her second favourite photographer, Henri Cartier-Bresson, widely considered the father of modern photojournalism: “We photographers deal in things which are continually vanishing, and when they have vanished there is no contrivance on earth which can make them come back again. We cannot develop and print a memory.”

The Limerick author and sometime archivist has, through superhuman effort and strong support from family and friends, painstakingly catalogued almost half of a near 5,000-strong collection of photographs taken across six decades of the 1900s by her favourite photographer, her grandfather Franz Sebastian Haselbeck.

The Limerick photographer, active from the early 1900s to the late 1960s, passed the collection to his son, Patricia’s father Frank, on his passing at the age of 88. On his deathbed, Frank begged his daughter to preserve his father’s work.

Almost 23 years later, through two fires and a flood which destroyed some of the incredible collection, Patricia has not only preserved, archived and catalogued the collection and exhibited them in both Limerick and Dublin, she has produced a fascinating book called Franz S Haselbeck’s Ireland, which has just been published.

In doing so, she has not only fulfilled the dying wishes of her father but also preserved and now exposed to life the stunning works created by her grandfather, an archive that has been called “one of the great Irish photographic collections” and considered of immense importance historically and socially.

All of this – and she uses the word sparingly, she explains – is almost “overwhelming”.

“The fact that it is now there forever is quite moving,” explains Patricia, who lives in Ahane, of the superb book, published by The Collins Press.

It is almost as if ‘FSH’, who was born in 1885 in Manchester but grew up in the heart of Limerick’s Jewish community in the early 1900s, perhaps knew that his collection would one day be catalogued and, ultimately, digitised.

“That is the one thing that every day I am so grateful for, because they were on the verge of degrading,” says Patricia.

“That quote by Bresson reflects the fleeting nature of them. And granddad did back up a lot of his work, he re-photographed onto roll film and printed and reprinted.

“When I started opening boxes – and this brought tears to my eyes – he had left notes on top of some about how they should be processed in the future. That was done as an 87-year old man in the year before his death. I am sure he had that hope.”

The pictures capture Ireland at a time of social upheaval and incredible change, and in particular, focus on Limerick and its surrounding environs in the rapidly changing landscape of the early 1900s.

Franz’s family were involved in the sausage and pudding making business in Limerick, later purchasing the Haft factory in Cathedral Place and living on Wolfe Tone Street.

His artistic talent and passion for photography was recognised early and he left for Dublin in 1903 to pursue it. Haselbeck was heavily influenced in his career by his training in the Dublin Metropolitan School of Art and later travels through Europe.

He spent summers in Kerry working as a tourist photographer before setting up a studio in his native Limerick, where he worked as a freelance photographer.

Subjects over a storied and at times difficult career, would include tourism and studio portraits, the Irish Volunteers training in Limerick and across Munster, British military manoeuvres in the region, the RIC and gardai, sporting and street scenes and, particularly, the construction of the Shannon Scheme at Ardnacrusha, where he was employed by Siemens-Schuckert as an interpreter and storekeeper, allowing him to document the unique construction.

Almost all of these subjects appear in the book, but it is Haselbeck’s eye, his artistic vision in studying a Limerick in flux, which is apparent on close study of the book.

“They are wonderful collections, but that it is all through the lens of one man makes it quite extraordinary,” agrees his granddaughter, who lived with FSH as a young girl and later went on shoots with him.

“I look at it and I look at him, the elderly man that I knew, but I am realising that I am looking through the eyes of a very young man who was travelling the length and breadth of Ireland,” she adds.

Patricia, who works part time in the University of Limerick as a tutor, admits working on the collection and researching it has become something of an “obsession” for her.

The initial spur came from the colossal file of pictures on the Shannon Scheme construction in the mid-1920s. The collection had travelled through life with Patricia, but she became aware that urgent assistance was needed if the collection was not to be lost entirely.

Fittingly, the ESB’s archive team and Siemens came to the rescue, supporting the preservation of the work, resulting in the 2010 exhibition Fond Memories Bring the Light in the Hunt Museum, out of which the book has spawned. But Patricia was always “precious”, protective of the collection.

“After the exhibition it grew legs and publishers were coming to me, but I wasn’t sure, I was still trying to research the whole collection, so I thought it better to wait before I committed myself to anything.

“I have got a sort of endless thirst for knowledge and research and I am certainly not a professional archivist and didn’t have all those skills, but I still followed every road that I could travel on it.

“ESB and Siemens sponsored the exhibition, but they were very generous, they only took a quarter of the space and allowed us to do a huge spectrum of other pictures, and that space they gave me had great freedom.

“There was all this other stuff, and some of it was backed up by diaries and entries, but some I could look at and have no idea what it was. It was only as I started to move forward I realised that these images started to reveal the most extraordinary people and images from our social and cultural history.

“I have been so precious, really precious, because for 23 years I have guarded everything with my life. I can’t take all this credit for myself because my sons pored over things with me as well and it is wonderful for them to be involved, they are the only descendants bar myself. And there were others not connected in any way who came forward and offered their expertise.”

The exhibition has been held in the RDS and plans are afoot for a larger scale exhibition for Limerick’s stint as City of Culture in 2014, while, such is the extensive level of research, a book about Franz Haselbeck could be in the offing.

In the meantime, Patricia has been meeting people on a daily basis who have recognised pictures in the book and made a connection, a situation that has given her great pride and would surely have provoked similar emotions in her father and grandfather.

“Every day something new comes from it and somebody expresses a feeling or emotion about it,” she says.

“I think my grandfather and father would be very moved by the result. There are some people living in Limerick still, old friends, who would have known my father and grandfather and they have said, ‘They must be looking down at you beaming with a big smile’.”

Franz S Haselbeck’s Ireland - Selected Photographs, compiled by Patricia Haselbeck Flynn is published by the Collins Press, priced at €24.99 and available in all good bookshops.