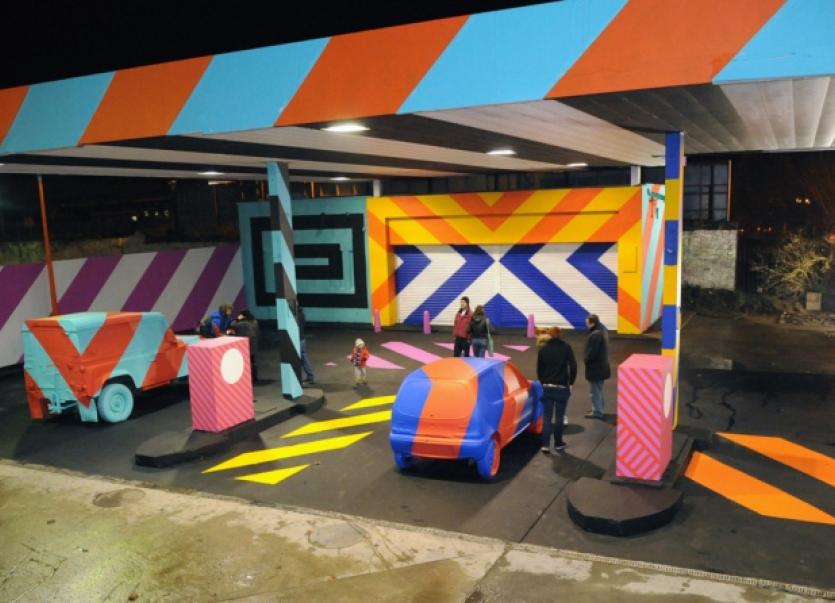 RENOWNED Irish graffiti artist Maser has sprinkled his magic all over a derelict petrol station in Limerick city as part of a transformative urban art project.

RENOWNED Irish graffiti artist Maser has sprinkled his magic all over a derelict petrol station in Limerick city as part of a transformative urban art project.

The Draw Out - Urban Exhibitionists project has vibrantly overhauled the Parnell Street petrol station, with vivid colours striking a beacon on the street.

The urban art project is a collaboration between Limerick City Council - who own the site - and Catherine O’Halloran, a senior youth worker in the Northside family resource centre in Ballynanty.

The ambitious initiative will roll out a number of creative urban art projects as part of City of Culture next year and Ms O’Halloran explained that the Parnell Street project followed a model of urban regeneration “that uses the most creative resources to reinvent space both visually and functionally”.

The youth worker has been collaborating with Paul Foley of Limerick City Council to identify sites in the city that have lain derelict for a period of time and, following an assessment, will establish a brief that can then be matched to an urban artist that is already addressing some of these aspects within their work.

As a result of this particular process, Maser was selected for the Parnell Street project, as, Catherine explained, “his work often boldly juxtaposes old and new, past and present in the architectural elements, the visual grammar and his choice of pallet”.

“He was the obvious choice from the outset,” explained Catherine.

“It was a natural fit and it is a true gift to city when an artist can re-imagine a space so that its very existence can provoke and inspire us as we engage with it,” she added.

“Draw Out’s vision is that we, as a city, are no longer hindered by consumer focused function but are ambitious enough to create dynamic examples of the highest quality art work that can live ‘outside’. We can then begin to relate with the environment in a whole new way, that is refreshing and invigorating.”

Ms O’Halloran said the project was a “defining piece” in the iniative, which has been ongoing for nearly two years.

Paul Foley, who has been working on the project for 12 months, said it is one he is “really excited about”.

“We have been collaborating with Catherine on a number of projects, including the street art at King John’s Castle, which sparked debate and has been listed in a poll of top ten Irish murals,” he explained.

“The council owns the site at Parnell Street and it was in a semi-derelict state. We wanted to embrace the positives of this project and see a transformation there.

“An entire transformation of the petrol station has taken place to bring it to a more colourful, artful state,” he added.

Those interested in viewing the project, which has dynamically altered the site, including two cars within it, will have to be satisfied with viewing from the street level, as access to it is not part of the project.

“It will be lit up at night but people will have to look in from the footpath,” explained Paul.

“It is a feature we are hoping people will come to view and appreciate and enjoy.

“We decided to be adventurous and collaborate with the project and make it a feature for Parnell Street and for Limerick and I am really excited about it,” he added.

The enigmatic Maser said that he “‘creates work that surprises people and questions their relationship with the familiar and the norm, also how dissociated we are from the space around us”.

“Questioning this is a positive thing,” added the graffiti artist, whose work has been exhibited around the world.