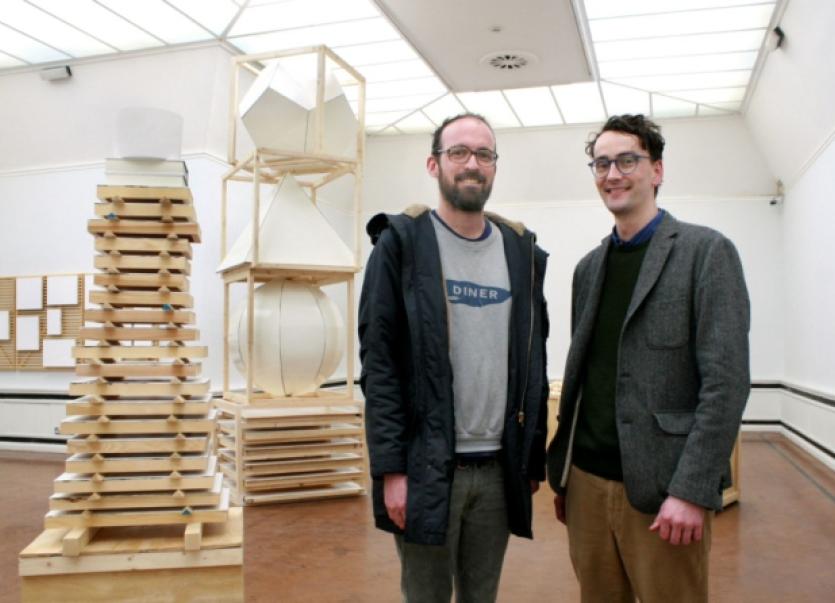 THE former Kerry Group Golden Vale milk processing plant, unused for the past three years, has been transformed as a spectacular exhibition space for Eva International 2014.

THE former Kerry Group Golden Vale milk processing plant, unused for the past three years, has been transformed as a spectacular exhibition space for Eva International 2014.

The massive industrial factory and warehousing area on the fringes of the city centre will house nine exhibition spaces with 32 distinct, cutting edge contemporary artworks.

It is, in effect, creating a gallery not unlike the Tate Modern in London or the Venice Biennale’s Arsenale Shipyard.

“We have been speaking about this location in relation to the Venice Biennale, part of which takes place in the ship building quarter, so the factory is a bit like Limerick’s version of that,” agrees Eva director Woodrow Kernohan.

“On the site, we have had to build a museum to house 32 projects. This is an industrial space and the possibilities are endless. But you have to create a space to work with. The opportunities are endless but the work is monumental.”

The exhibition of visual art, now styled as Ireland’s Biennial, returned in May 2012 after a two year absence and period of restructuring at the Arts Council’s behest.

When it opened two years ago, Minister of State Jan O’Sullivan revealed to this newspaper that plans were afoot to “promote Limerick as a city of culture”.

The exhibition returns as the year begins to gather pace after a rocky start, and Eva has been supported by City of Culture to use the colossal space in the former Golden Vale site.

“The spaces and presentations are monumental, so there is a continuity with Fuerzabruta on the scale of the it,” explains Woodrow, Eva’s full-time director.

“City of Culture is a recognition of the activity and vibrant energy that already exists in Limerick.

“It has been great for Eva to be part of City of Culture, our programme would be taking place anyway, but we have been able to expand it as a result. There has been additional support through the project to transform the site into temporary exhibitions.”

The period of restructuring, while undoubtedly painful for the festival which returns in its 36th edition this year – first exhibiting in 1977 – has helped to put it on a more secure footing as a result.

“We have 56 artists if you count collaborating duos, over 20 new commissions – and I think that is really possible as a biennial, but also within the framework of City of Culture,” says Woodrow.

“That has been of huge benefit for Eva – to become a biennial and to be part of the city of culture programme.

“I guess it was, certainly within the arts community, well known nationally and growing internationally, but as a biennial, it has a new profile that is solidifying the organisation, or consolidating what Eva could be, and realising its potential.”

Fittingly, curator Bassam El Baroni has chosen the theme of ‘Agitationism’ for his selection of work for the overall exhibition, which features the work of 56 Irish and international artists.

The project will inhabit four spaces over the course of the next three months - the City Gallery, the Hunt Museum, the Bourne Vincent Gallery in UL and the Golden Vale site, while the Greyhound Stadium will play host to the Eva International Cup this Saturday night as a special event.

Woodrow explains the Egyptian born, Alexandria-based curator Bassam selected the theme of agitationism as a way of “dealing with the unknown”.

“He describes his encounter with the uprising and political changes as being similar to the ‘agitated state’,” says Woodrow.

“This project is asking artists to reflect on that moment of uncertainty, of change. They have responded to that in very different ways.”

American artist Zachary Formwalt, who is based in Amsterdam since 2008, is showing his video installation - In Light Of The Arc - in one of the massive factory spaces on O’Callaghan Strand.

“It is an interesting place in which to present my work,” he says. “This particular piece is set on a construction site of a stock exchange, so I guess there are some similarities. It makes sense on some level.”

In the City Gallery, a hive of activity late on Wednesday evening in anticipation of the launch this Friday, Israeli artist Alon Levin, based in Berlin and Den Hague, said his work - End To The Grand Gesture – “looks like it is at home” in the gallery, where it is exhibiting as an overall collection for the first time.

“As soon as they opened up the gallery, it appeared to be their space. I am pretty happy about the result, it is really exciting - it is almost like giving the work a new life,” he says.

“I don’t see my work as being site specific, if anything it specifies a site and somehow it is happening here and that helps me understand myself, which is good.”

EVA International 2014 launches this Friday and opens to the public on Saturday morning, running until July 6. See www.eva.ie.