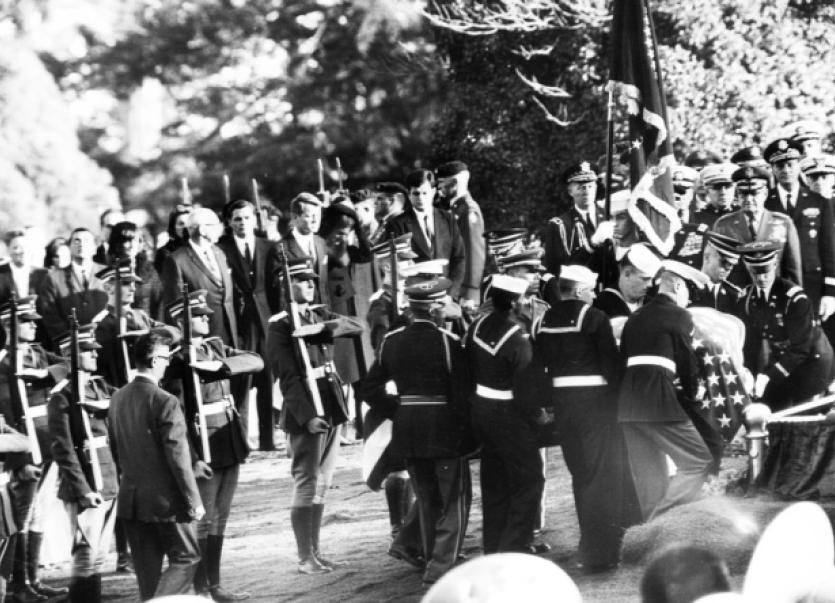 Just a year after leaving CBS Sexton Street, Eoin Moloney was one of two Limerickmen from the 37th cadet class in The Curragh invited to the US for the funeral of President John F Kennedy

Just a year after leaving CBS Sexton Street, Eoin Moloney was one of two Limerickmen from the 37th cadet class in The Curragh invited to the US for the funeral of President John F Kennedy

It was a Saturday night and that meant some down time for 37th cadet class billeted at The Curragh. Some went to the cinema within the base, others to a dance, while some stayed in their quarters.

Nineteen-year-old Limerick-man Eoin Moloney was among a group that went to the cinema, but anyone who was there can’t remember what they were watching, only that they never got to see the end credits roll.

Instead he just remembers that duty called and – along with fellow Limerickman Richie Heaslip (father of the Ireland rugby player Jamie Heaslip and a former pupil of St Munchin’s College) – he was about to face into the most important assignment of his military career.

The story started at Arbour Hill on June 28, when President Kennedy laid a wreath in honour of the executed leaders of 1916. The cadets had a lead role in the ceremony that Kennedy later called the highlight of his Irish tour.

Less than five months later the cadets would again be catapulted onto centre stage – in this case the world stage as the world paid its respects to the slain president.

It all had its genesis in a personal request made by Jackie Kennedy in the hours after President Kennedy’s assassination in Dallas. “I must have those Irish cadets at his funeral,” she said.

“It came about because Kennedy was given a guard of honour by the 36th Cadet class at Arbour Hill in June of that year – that was the senior class at the time, while we were the junior class,” recalls Eoin.

“The cadets impressed President Kennedy so much that after the visit he made a request for a film of them performing the drill, because he wanted to show it to the US authorities.

“But the way things were working in RTE, the cameras were on President Kennedy all the time and nobody focused the camera on the drill the cadets were doing so a new film of the drill had to be made and that’s how our cadet class came into the story.

“The senior class who had performed the drill in June were commissioned and became officers so when the request came we were now the senior class which meant we went up to Arbour Hill to perform the drill for the film that went off to the States.

“It was an old British Army drill, lying on arms reverse where you put the muzzle of the rifle down onto your toe and you bring your hands in one at a time, very slow,” adds Eoin, who had joined the cadets the previous year after finishing his Leaving Cert in CBS Sexton Street.

So began the journey of the 37th Cadet class from Arbour Hill to Arlington. On the Saturday night they were in The Curragh camp cinema, the following morning they were in Dublin Airport and America bound.

The film being screened was stopped, a senior officer emerged and told the young cadets to report back to their quarters for manoeuvres.

“The lights were on in The Curragh at 12 at night,” remembers Eoin, “and we were due to fly out to Washington the following day. We all fell in, as the saying goes, and we were doing this drill, over and over and they picked the 26. The question was, were you going to make the 26?

The first leg of the journey brought them to Shannon before flying on to Gander and onwards to Washington, where they arrived on Sunday, while the following day they were given a lead role in the graveside ceremony.

“What I remember about the journey,” recalls Eoin, who now lives in Athlone, “is that when we landed in Washington, the Secretary of State, Dean Rusk, came on board to welcome us and to tell us that Jack Ruby had shot Lee Harvey Oswald [the man who shot Kennedy]. It was the unreality of everything that was happening. It was incredible.

“We were billeted in Fort Myer, right up against Arlington Cemetery and the following morning we went to take up our position at the grave. I would say that we were in position two to three hours before the funeral arrived

“We were down in a hollow and there were thousands of people corralled straight up in front of us looking down the grave and all behind us was Washington. The cortege left the cathedral and as it crossed the river we could hear this muffled drum beat coming closer and closer with all these world leaders marching behind it.”

When the cortege finally reached the grave there was a fly-pass of 75 jet planes, then Air Force One on its own, while Lieutenant Frank Colclough prepared to give the signal for the 26 cadets to perform the Queen Anne Drill.

“We were literally looking into the grave with all the American troops falling in behind us,” recalls Eoin. “The cortege came along and an American bearer party passed in front of us and put the coffin down.

“Then Jackie, Robert and Teddy Kennedy followed and we performed the drill after being given our orders in Irish. It was an incredible experience for us all.”