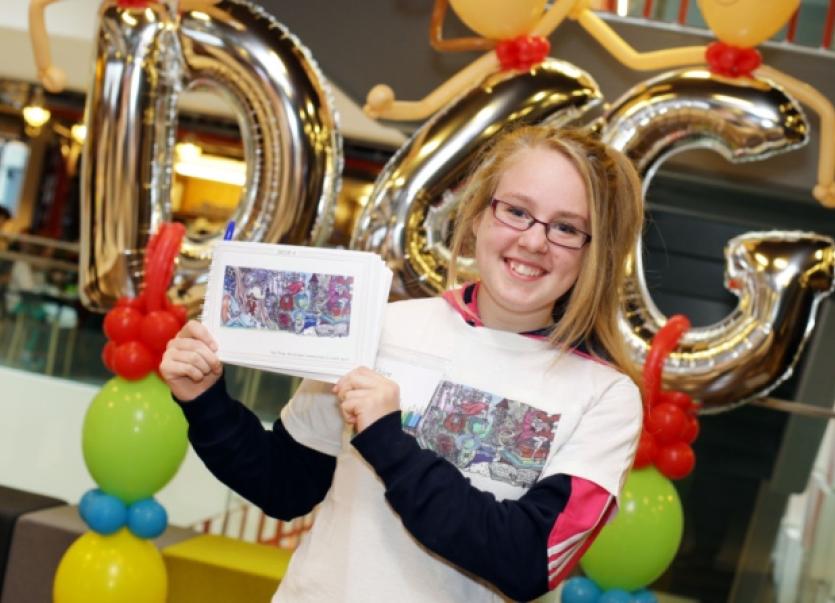 Chloe was up against 74 other finalists – overall there were 5,085 entries – but she was declared the winner in her age-group after receiving the most public votes.

The theme of the competition was My Perfect Day and Chloe’s winning doodle entitled Fairytale Fantasy was inspired by her love of reading fairytale books when she was younger. She used a tree, tower, mermaid, pumpkin carriage, fairy, Rapunzel’s hair, castle and more to put a spin on the iconic Google logo.

After winning her category – and taking home a Chromebook for herself and her teacher – Chloe said it still hadn’t sunk in.

“I’m still shocked. I was delighted to make the final. When I saw the other entries in Dublin they were really, really good,” said the modest Chloe. Returning to school last week she got a great reception.

“All my friends were jumping on me and hugging me,” said Chloe, who wouldn’t mind working for Google in the future after seeing their headquarters.

Caoimh Ryan said all the staff, students and management of John the Baptist Community School in Hospital were exceptionally proud of Chloe.

“Everybody got behind her, made posters and voted for her so thanks to everyone. When she won it was announced over the intercom and everybody was delighted,” said Caoimh.

In total, there were 140,000 votes cast so Chloe must have received thousands.

Limerick was double-handed in the final as Grace McClure, 13, Corbally, who attends Gaelcholáiste Luimnigh, was also chosen from thousands to go to Dublin. Grace included images from some of her favourite artists; Picasso, Munch, Van Gogh, and Vermeer.