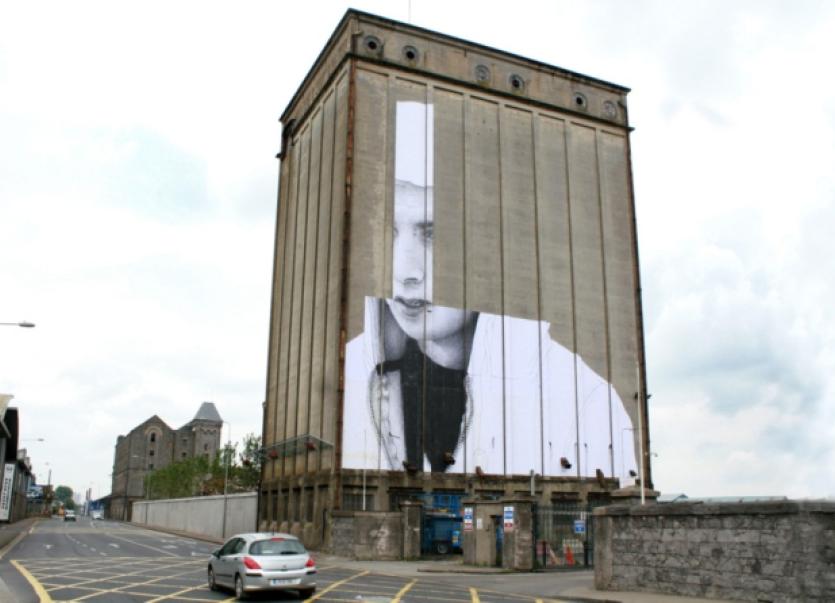 IT IS street art - but stretches to seven storeys high.

IT IS street art - but stretches to seven storeys high.

Joe Caslin’s Our Nation’s Sons art project is causing a stir as it is installed on the side of the iconic Ranks building, owned by Shannon Foynes Port Company.

Backed by the owners and the city’s environment department, under the umbrella of City of Culture, the project aims to empower young men to put “something positive back into their own community” says Joe, who is working with eight youths from CBS Sexton Street and Crescent College Comprehensive on it.

“That is a really big part of the project, that there are local kids very involved in what we are doing. They are down on site, putting up the work with us,” he explained.

“The project is based on young men and re-installing them back into society.

“At the minute there are mental health issues among that generation, suicide and depression are a big part of that.

“The core of it is kids who might have been sitting at home with no engagement with society at all. These exact same kids, if you give them something to do, they can blow the minds of a city, they can do something that is amazing,” he added.

The team have transferred Caslin’s sketch onto paper and are busy pasting it onto Ranks, where it might remain for three to 12 months, he said.

The team expect to have installed the 36m high, 22m wide portrait by this weekend and will then move to other projects around the city.

“We took a look from the top of the Clarion and over the other side of the river. It is an iconic building in the city, it is so well known, it is a landmark. It is nice to be able to put something up on it,” he said.

“It is temporary. We don’t know how long it will last. It could have a shelf life of anything between three to 12 months. It depends on the site and how long it will left and how well it sticks. It is an old building, and the cement isn’t top notch, but we should get a while out of it.”