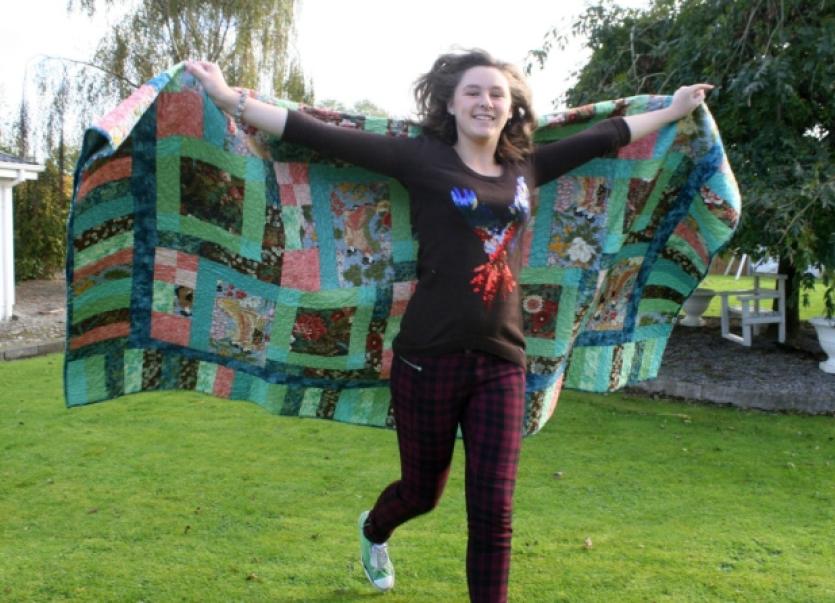 A SEWING set for Christmas started a Limerick teenager on the path to being named the best young quilter in the world.

A SEWING set for Christmas started a Limerick teenager on the path to being named the best young quilter in the world.

The photograph of Hannah Dochertyâ€™s award winning entry shows the intricate detail, talent and time invested in her creation. She was classed as the first prize winner in the under 16 category at the International Quilt Festival in Galway. Entries come from all over the world so not only is she one of the best quilters in Ireland but across the globe.

The judges at Cappamore Show also rewarded her talent when she was declared a first place winner there.

Hannah, from Pallasgreen, said she has always been interested in arts and crafts.

â€œI got a sewing set one Christmas and then I joined a local sewing club run by Rebecca Palmer in Cappamore,â€ said Hannah, who has recently turned 14.

She estimates that her six foot by six foot work of art took between three to four months to make.

The first prize in the international competition was 500 dollars and Hannah was surprised and delighted when she was declared the winner.

The annual International Quilt and Craft Festival of Ireland held in Galway holds the record for the most quilts ever to be assembled in one place in the country with over 1000.

But Hannah isnâ€™t sitting on her laurels.

â€œIâ€™m planning to do a quilt with butterflies for my Junior Cert,â€ said Hannah. Her mother and father, Carmel and James, are very proud â€“ as are her brother and sister, Philip and Merran.

Many teenagers would have spent prize money on clothes or computer games but Hannah invested the money in two weeks at Centrestage Arts Academy in Limerick.

And no doubt she will be back to defend her quilting crown in Galway next year.