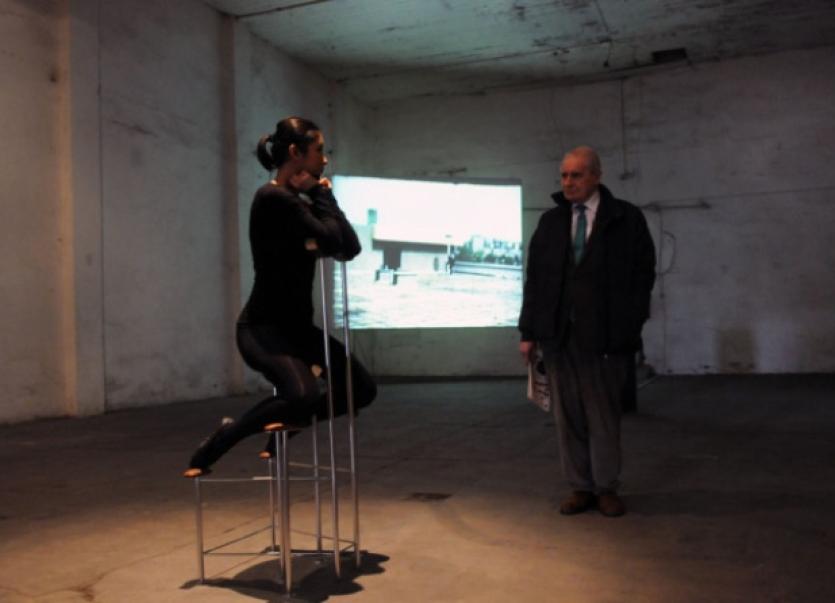 thirty-six years on, it continues to stop viewers in their tracks, provoke a lot of chin-stroking and head-scratching, and raise more questions about modern life - and art - than it could ever hope to answer.

thirty-six years on, it continues to stop viewers in their tracks, provoke a lot of chin-stroking and head-scratching, and raise more questions about modern life - and art - than it could ever hope to answer.

But then again, perhaps that has always been the intention of Eva International.

Featuring artists from Berlin, Egypt, Tel Aviv, New Delhi, New York and LA, and a host of other locations in between, the 36th exhibition, now a biennial event, is perhaps the most diverse Limerick has ever seen.

However, it has not always been greeted with enthusiasm - even by artists themselves. The renowned Limerick artist John Shinnors has in the past made known his distaste for conceptual art, commenting that after he viewed one Eva exhibition “my scrotum actually tightened.”

“I don’t call it art at all, I call it things, as many people do. There’s no substance to it or process of creation at all, but I’m not saying every artist should stand in front of an easel,” he said at the time.

Mike Fitzpatrick, the director of Limerick City of Culture, and head of the Limerick School of Art & Design, laughed that he’d have to disagree with his very good friend in the arts, saying “one of the joys of living in the world is not understanding it most of the time.”

“Contemporary art attracts phenomenal audiences, and these are pieces you could expect to see in the Tate Modern in London. Of course, there is loads of stuff that you don’t get immediately, but that is part of the spectacle and one of the magical things about it. It can delight, surprise or upset people.

“It’s a fantastic exhibition, with a really large range of work, and really a great treat for people over the next few months, especially if you combine it with Richard Mosse’s Enclave exhibition in Ormston House. Have the chance to see it - be baffled, be amused, be engrossed in it,” he said.

Eva director Woodrow Kernohan said Eva has been “received amazingly well so far”, with over 50 international curators and journalists from around the world visiting the key spaces.

Woodrow, who was also director of the exhibition in 2012, said he believes the curator has brought together “complicated works with works that have an immediate pleasure” for the viewers.

Spread across four city locations, the contemporary art exhibition features installations, wall paintings, interactive media, drawings, and projections. It was launched last week in all four locations, with a performance from an Angolan dancer in St John’s Square, and an after-party in Costello’s Tavern, which features in the exhibition.

Artist Ann-Sofi Siden from Stockholm has produced a silent video on a day in the life of this Limerick institution, entitled Lunch to Last Call, which was produced using the pub’s own surveillance equipment with a 24-hour cycle, cut and edited into a 90 minute movie.

When Swedish artist Ann Bottcher visited Limerick earlier this year, she “went in search of trees that silently spoke to her”.

The Malmo artist ventured along Mulgrave Street and the Ballysimon Road, taking in Limerick Prison, St Joseph’s hospital and Mount Saint Lawrence cemetery. It may not be the most aesthetically pleasing vista in the city, but the route provided her with inspiration for her pencil on paper drawings of yew trees on the hospital grounds and the accompanying research on the rise and fall of mental health institutions, which are on display in the former Golden Vale Milk plant factory on O’Callaghan Stand.

Time was of the essence for Brooklyn based artist David Horvitz, who has presented his Evidence of Time Travel project in the same space, through the use of a slide projection, clock and text documents. When he arrived in Ireland, Horvitz kept his watch set to California’s time zone, eight hours behind Ireland, and using this skewed clock, scheduled his daily routine against the grain. While others slept, he ate dinner and took his after dinner walk at the break of dawn to experience remaining in his own time zone in another alternate universe.

Entitled Agitationism, this year’s exhibition has been curated by the the Egyptian born, Alexandria-based Bassam El Baroni and features works by 56 Irish and international artists, selected from over 2000 proposals by artists in 96 countries.

He said the exhibition, as the name suggests, “simulates the sense of living under agitation while capturing how we are slowly adapting to a diﬀerent perception of the world by working through our relationships with historical ideologies, post-colonial narratives, other beings, and speculations about the not-so-distant future”.

The other exhibition spaces are the City Gallery, which features 15 works, the Hunt Museum, featuring two works, and the Bourne Vincent Gallery in the University of Limerick, which displays one multi-media piece, the work of Uriel Orlow.

The exhibition of visual art, now styled as Ireland’s Biennial, returned in May 2012 after a two year absence and restructuring at the Arts Council’s behest.

- Eva International is open seven days a week until July 6