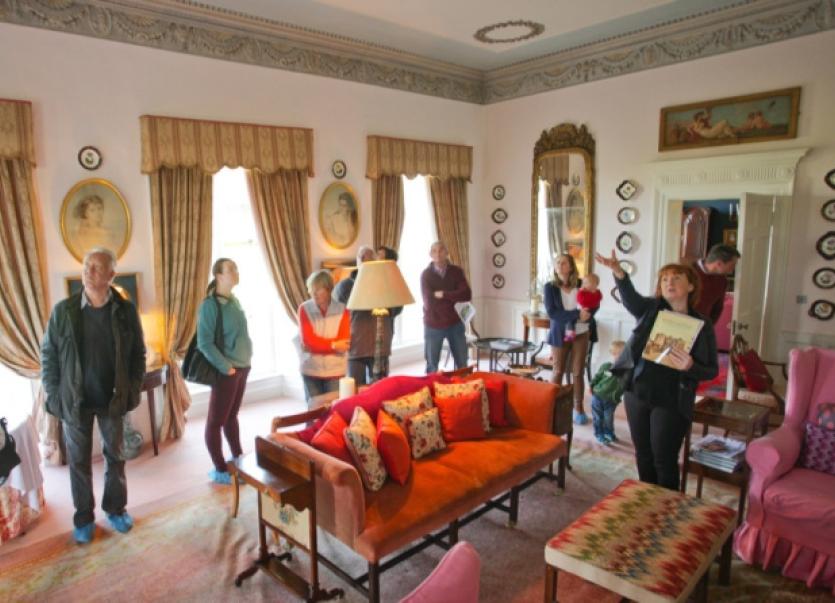 OPENHOUSE Limerick welcomed over 2,000 people through the doors of some of the county’s finest and most unusual residences and buildings last weekend.

OPENHOUSE Limerick welcomed over 2,000 people through the doors of some of the county’s finest and most unusual residences and buildings last weekend.

But one woman wasn’t just bowled over by the architectural delights and opulence of Glin Castle. The famous castle, which is on the market for €6.5m, flung open its doors to the public, and witnessed the first proposal of marriage the castle has seen in years.

While the happy couple wish to remain anonymous, Patricia Geraghty, project coordinator with Open House, said the groom-to-be contacted them before the weekend to let them in on his plans. “We were delighted to help him. We were impressed with the effort and thought that he had put in. One of the happy couples surname is Fitzgerald so that added a lot of meaning to the location of Glin Castle for the proposal,” Ms Geraghty told the Limerick Leader.

She said all the organisers of this year’s event were delighted that it drew “massive” interest from the public with all pre-book venues being booked a week in advance.

More than 20 buildings in Limerick opened to the public, some for the first time, during the fourth annual initiative from last Friday to Sunday.

Fort Shannon villa in Glin, Glin Castle and Ardnacrusha power station were all booked out in advance. Other buildings which were opened at the weekend included Sarsfield Barracks, Limerick Circuit Courthouse, the Quaker Meeting House in Ballinacurra, and St. John’s Church in Knockainey.

Of the 2,000 people who attended this year, the most popular venue was the Sailors’ Home on O’Curry Street with 219 visitors going through its doors.

Previously left in a near derelict state, the former police barracks has been restored by the Shannon Foynes Port Company, and has in recent years become an atmospheric stage in hosting plays and art exhibitions.

Ms Geraghty said the response from the public was “overwhelmingly positive”, with many requesting that more buildings be made open to the public for special tours. She said people remarked of McKerns Printing on Glentworth Street that it was “wonderful to see this hidden world”. One of the tour guides and committee member, architect Séamus Bairéad, said there are a multitude of reasons why OpenHouse continues to be so popular.

People’s inherent ‘nosiness’ might be one factor, for others it’s down to a combined love of architecture, history and social regeneration, and young couples looking to get a foot on the property factor are also seeking inspiration and guidance for their own future homes.

Mr Bairead was a tour guide for 21 Hartstonge Street in the city, a Georgian property which was resurrected and restored by professor Merritt Bucholz, head of the school of architecture at the University of Limerick.

The protected structure was purchased in a state of disrepair in late 2006, with the ambition to restore the key historical elements of the dwelling and to remodel the interior to serve primarily as a residence for lecturers and other academia visiting UL. “There’s one room per floor, and it’s stacked vertically. It’s a provocative building for a lot of people who see it, and some people find it fascinating,” he added.

Others remarked that the Limerick Modern walking tour with Peter Carroll made them look at and appreciate buildings that they ordinarily may have walked past before and not appreciated. There was also a discussion at LSAD about how Limerick values its modern buildings, what their future should be and what status should they be ascribed.

Limerick is a member organisation of the Open House worldwide family, which also includes London, New York, Helsinki, Melbourne and Rome, as well as the Irish cities of Belfast, Dublin and Cork.