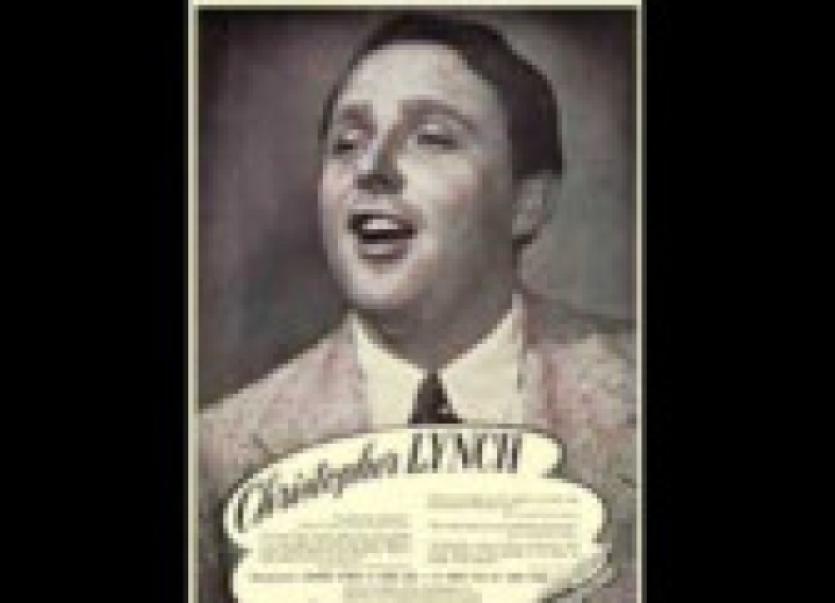 The bursary award is an initiative of Rathkeale Community Arts Group in honour of the late tenor Christopher Lynch, who was a native of Rathkeale. In offering a bursary, the group intends to offer support to a singer, male or female, aged 15 upwards with a genuine talent and interest in formal, classical singing. The bursary of €1000 will be awarded for the purpose of facilitating further development and voice-training or study by the successful applicant.

“We are absolutely delighted to be in a position to offer this bursary again,” the chairperson of Rathkeale Community Arts Group, Norma Prendiville said when the group announced the award scheme this week.

“Over many years, our group has worked to ensure that the talent and achievements of the late Christopher Lynch have not been forgotten. At the height of his career, he was a singing super-star here at home and in the US and we have organised concerts and produced material which recall and honour those achievements.”

The winner of the bursary will be announced in November at The Christopher Lynch Festival Weekend.

Applicants must be from Limerick or living in Limerick, city or county, and are asked to submit three copies of a CD/DVD of their singing along with a completed application form by the closing date of October 3.

Born in 1920, Christopher Lynch’s talent was evident from his youth when he was a member of St Mary’s Church choir. He went on to study in Dublin under Dr Vincent O’Brien, a renowned teacher. Successful tours of Ireland followed and he was soon spotted by Count John McCormack who took the young Limerick man under his wing. A year later, Lynch performed in front in 3000 people in New York’s Carnegie Hall in a concert which was broadcast coast to coast in the US and a star was born

For more information and application forms, email rathkealearts@gmail.com or go to http://rathkealearts.wordpress.com/christopher-lynch-singing-bursary or Christopher Lynch Singing Bursary on Facebook.