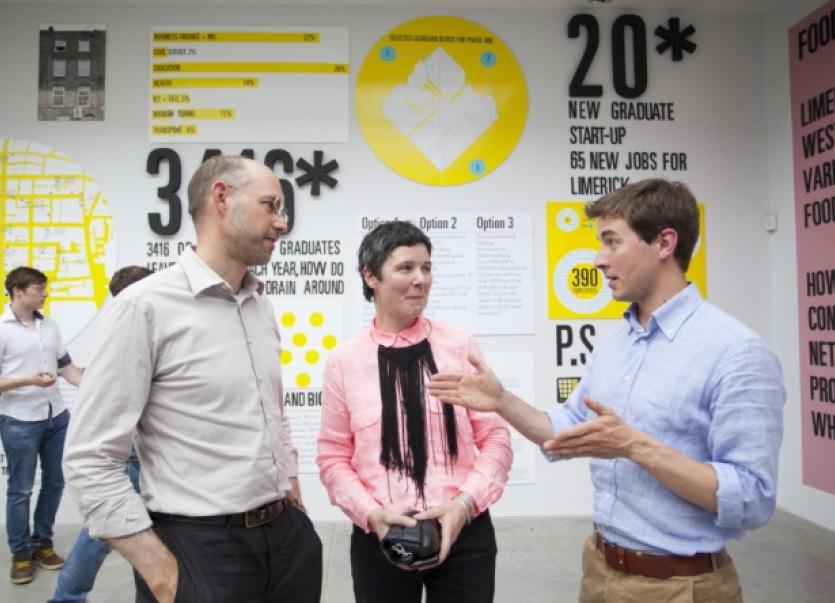 THE fruits of an intensive research ‘think tank’ hosted by UL and suggesting new ideas for the city have been unveiled.

THE fruits of an intensive research ‘think tank’ hosted by UL and suggesting new ideas for the city have been unveiled.

The Intelligence Unit (IuLimerick), an innovative collaboration between the architecture and business schools in UL, revealed the results of eight weeks’ work in the City Gallery last Friday, showcasing a series of ideas for “the future of Limerick”.

Merritt Bucholz, Professor of Architecture, said the fresh, design led thinking presented suggested new ways for the city, county and University to “work together to really change the city” and that the project is “just the beginning” of future work, with the Limerick 2030 plan very much to the fore.

The analysis, drawn from research and public suggestions, was narrowed down to focus on costed plans to develop an artisan food network, to conserve the city and re-occupy the Georgian quarter and to incentivise participation in education.

“After so many attempts to solve Limerick’s problems, it’s time to get new, fresh, design led thinking,” explained Prof Bucholz.

“The University of Limerick has a contribution to make to the city. The School of Architecture has been producing IU workshops for several years, and it’s from this basis that the current project has emerged. This year has been a new departure for us. The collaboration with Stephen Kinsella and his colleagues at the Kemmy Business School is helping to make our ideas realisable. This is only the beginning.”

Each of the plans are articulated as an idea and also as a policy, with one of the projects already spawning the creation of a new company being created by two Limerick men and recent graduates from the University.

Stephen Kinsella said the IU think tank had “the potential to change how we do policy design in this country, and now we’ve proven the concept I think we need to make this model more widespread”.

The research, erected on the walls of the city gallery, will run as an exhibition for the next two weeks.

For a full and detailed analysis of this research project, see the weekend editions of the Limerick Leader.