Craft and history of Limerick lace explored by Moyross group 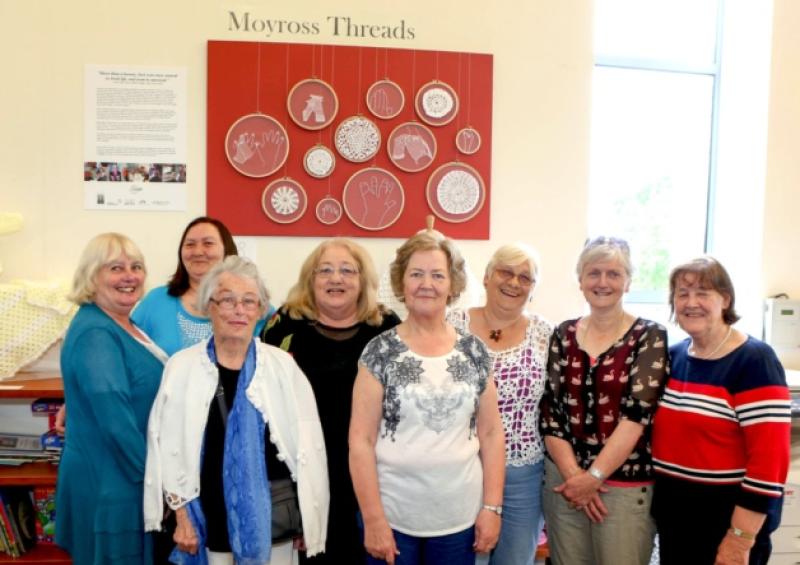 A GROUP of women from Moyross have opened their exhibition Threads, under a City of Culture initiative to explore both the craft and history of Limerick Lace.

A GROUP of women from Moyross have opened their exhibition Threads, under a City of Culture initiative to explore both the craft and history of Limerick Lace.

Following the six week programme, the exhibition in Watch House Cross Library opened last Thursday, and runs until June 26, in a collaboration between the group of women, the Hunt Museum and the Limerick Regeneration Project.

Through workshops, field trips and sharing stories the Moyross Needlecraft group have put together this exhibition to highlight and share with the community their creativity, skill and connection.

The works on display are a combination of the skilled crochet, knitting and cross stitch work that the ladies do and also their first steps with intricate lace-making.

The Moyross needlecraft group evolved over three years ago out of a ladies coffee morning and the group now comes together every Thursday in a room at Corpus Christi Church in Moyross.

They share patterns and ideas, help each other and also make pieces for charity raffles and organisations. Some of the group are beginners while others are more accomplished craftswomen.

With the assistance of staff from the Hunt Museum, over a six week period the group explored the craft and history of Limerick Lace. This included a talk in Moyross by Dr Matthew Potter and Frances Nevin about the history of Limerick Lace, a visit to the Limerick City Museum to see lace pieces and a trip to Kilkenny to look at a more contemporary application of lace in the Interlace Exhibition at the National Craft Gallery. The trip to Kilkenny included a look at the tapestries hanging in the Castle and the whole day was organised by Mary Whelan of the Craft Council of Ireland.

Artist Carrie Lynam came to Moyross to work with the group for a number of weeks, introducing them to techniques and encouraging the group to make unique pieces seen in the exhibition today.

When I saw the exhibition I was impressed by the fact that it was not about expertise but rather about the process of learning and about the application of new ideas to old skills. The pieces on show represent work by women at different stages on the creative journey and features examples of Limerick lace, knitting, crochet and cross-stitch.

If you go along, you will see amongst others work by Bernadette O’Shea who, though a relative beginner, took on a complicated piece of fine crochet while Ursula Dundon did an exquisite portrait of her parents in cross stitch. Ursula was also wearing a very impressive lace top she made in crochet work. Mary Hallam, perhaps the most experienced member of the group, has several exhibits, including a beautiful christening gown and a black crochet top.

The exhibition was launched by Dr Dominique Bouchard, curator of education and outreach at the Hunt Museum.

In her opening address, Dr Bouchard spoke eloquently of the significance of culture in the Regeneration process. She sees the exhibition as “an opportunity to show off the wonderful things people are already doing and that everyone else should know about”.

“Projects like this help bring history to life and bridge the connection between past and present in local communities. The work that these women have done as part of the project ties them into a long and celebrated tradition not only of Moyross but also of the history of women in Ireland,” she said.

Moyross, its women and their talents are all part of our city’s culture. The skills these women possess and their efforts to express themselves in new ways using traditional crafts, which were in danger of extinction, are enriching to our society as a whole.

Once a thriving industry and a sought after fabric for the wealthy Limerick Lace was also a source of income for many women in the city and surroundings. The history of Limerick Lace is a complicated one, christening gowns, wedding veils and alter coverings passed down and kept over the years remind us of not only of the luxury and celebrations in which they played an important role but also the labour and hardship behind their fabrication.

This project represents the first time that Limerick Regeneration has invested in culture as part of its endeavours and quite rightly so. There is more to regeneration than simply putting up new buildings; investment in people’s activities and their engagement with the greater community is more subtle and productive than allowing people to simply exist on the margins of our society.

Tracey McElligott, development officer with Moyross Residents Forum, spoke of the group’s pleasure and enthusiasm for the project but also about the group’s initial reluctance to take help from the Hunt Museum and Limerick Regeneration.

She also spoke of fear: fear of exposure and fear of being let down all based on past experience.

Never was a project so aptly named, for through needlework these women have revived old skills, used them creatively and applied them usefully, while at the same time drawing together various strands of their community and finding trust and a new space for themselves in the web that is our city.