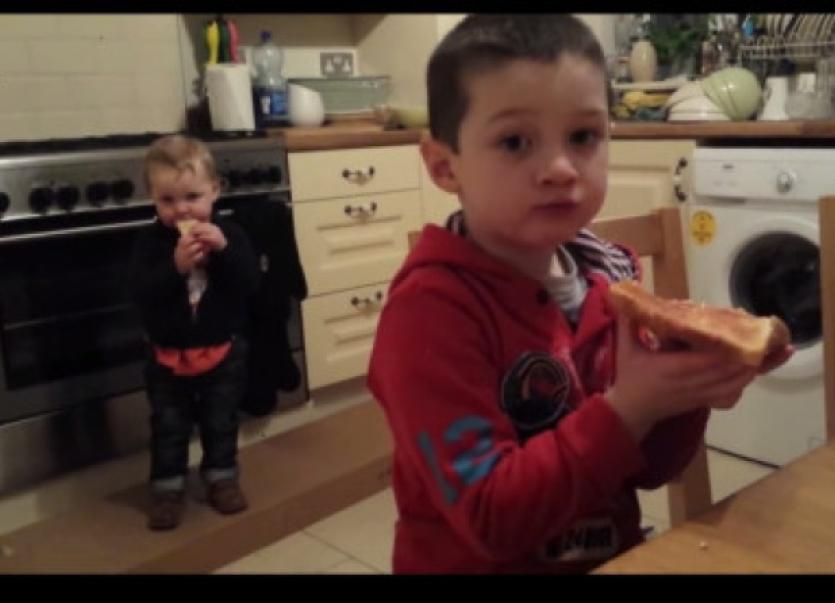 IT RUNS to just 26 seconds long, but a video starring two Limerick kids caught in an unfortunate moment has received nearly eight million hits on the video sharing site YouTube.

IT RUNS to just 26 seconds long, but a video starring two Limerick kids caught in an unfortunate moment has received nearly eight million hits on the video sharing site YouTube.

The video, captured by a godmother, shows two young boys eating beans on toast, and then falling over as they hear the jingles of an ice-cream van approach.

Incidentally, the ice-cream seller happens to live across the street and was not selling ice-cream at all at the time, but was merely alerting his wife that he was on his way home in time for tea.

The video was posted by Nenagh based photographer Selina O’Meara, who is godmother of Liam, 18 months, and who had been babysitting him and his older brother Luke, aged four, for mum Karen Naughton two weeks ago when she shot the short clip.

“It’s mad how much it has taken off. It has been a really interesting week just seeing it grow and grow. Selina initially posted it on my Facebook page for me and my husband James to see it and I was amazed that it had 61 views at that stage,” said mum Karen, from Castletroy.

“It wasn’t a set-up,” she reassured. “Selina always has her camera on, and she thought there was going to be an incident with the bowl of beans. It was just a coincidence that the ice-cream van drove into the neighbourhood at the same time.”

The video has even attracted a parody remake, with two grown-up German males, re-enacting the moments before the fall. It has received over 14,000 views to date.

Many people on YouTube remarked how “weird and strange” it is to see two children eating beans on toast, but Selina reassured them that this is part of a staple Irish diet, and that no children were harmed in the making of this impromptu video.

While Luke is seen falling to the floor and crying, she explained that he was crying about dropping his toast, but quickly came to his feet when he was offered a coconut bar as a replacement.

Separately, a video starring a “dancing cleaner” at Limerick’s Milk Market at the weekend also looks set to become another internet hit.

The 1.17 minute video, which shows the unidentified man gradually attracting a growing audience, has received over 1,500 views in the space of 24 hours.